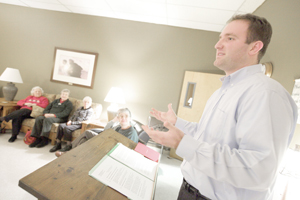 the Jesuit Novitiate. As a second year novice of the Jesuit Novitiate of St. Andrew Hall in Syracuse, he is learning how to pray and is discerning whether he wants to continue in the Society of Jesus. “It’s a real opportunity for growth,” said O’Brien. Even though O’Brien hasn’t yet professed the Jesuit vows of poverty, chastity and obedience, he said that he is presently living them out in a more intentional way.

St. Andrew Hall is the Jesuit Novitiate for the Maryland, New England and New York Provinces. The fundamental goal of the formation of a Jesuit is to prepare priests and brothers who are well educated, trained in the Spiritual Exercises of St. Ignatius, with skills to minister in a diverse and ever-changing environment.

Jesuit priests and brothers serve in parishes, retreat houses and social service agencies. They also work as teachers, administrators, missionaries, serve their Jesuit brothers as province leaders and as advisers of young Jesuits.

Father Lingan, in his seventh year as director of the program at St. Andrew Hall, said he feels honored and privileged to witness the ways in which the men grow as they complete their Jesuit formation. “It’s very heartening to see,” said Father Lingan. “They’re very generous men and very intent. I tell them the most important thing they need to do is to love Jesus. Everything else is secondary.”

O’Brien, a second-year participant at St. Andrew, is from King of Prussia, Pa. Before enrolling in the novitiate program, O’Brien worked for the U.S. Department of Justice in Washington, D. C. as a paralegal. He attended Holy Cross College in Worchester, Mass. It was there that he began to form an impression of the Jesuit priests he encountered. “They appeared to love what they were doing and their lives as Jesuits and as priests,” said O’Brien. “That was the beginning of my personal relationship with God, and that relationship brought me to this society.”

The first steps in considering a Jesuit life are very informal and without obligation. Because a Jesuit vocation is ultimately a fraternal relationship, it is suggested that a potential candidate meet and converse with a Jesuit. After a period of reflection and conversation, the Jesuit may invite the man to join in a formal discernment program.

After an appropriate period of discernment, a man may elect to apply for admission into the Novitiate of the Society of Jesus. The application process is an intense period of reflection, assessment and discovery. Through this process, the men strive to discover the will of God, and they commit themselves to a faith-filled response to it.

The first two years of a Jesuit’s life are spent in the novitiate program. The four fundamental goals during this time are verification of one’s vocation, a more intimate relationship with the Lord, growth in authentic self-knowledge and an increasing love for the Society of Jesus.

During their first semester, the first-year novices participate in three classes: conferences on Jesuit life, history and customs, an introduction to the person of Jesus in Scripture and basic or intermediate Spanish. They also participate in a local ministry.

Father Lingan is very appreciative of the way the ministries within the Syracuse Diocese are willing to work with the novices. “I’m happy and heartened with their support of what we are doing at the novitiate,” said Father Lingan.

In January, the novices make the Spiritual Exercises, a 30-day silent retreat developed by St. Ignatius Loyola, the Jesuits’ founder. Following the long retreat, they make a pilgrimage to areas such as Bolivia, Jamaica or South Dakota, where they live, work and pray with Jesuits in the different cultures.

“For me, the Spiritual Exercises retreat was the high point of the program,” noted O’Brien.

Father Lingan said that the Spiritual Exercises are intended for the men to develop a personal relationship with Christ and then to discern God’s will. “It’s a very personal experience,” said Father Lingan. “The men come to a deep appreciation of God’s love for them and they ponder the question, ‘What is God calling me to do?’”

The Spiritual Exercises include periods of prayer with five themes: the reality of God and His creation, human sinfulness, God’s forgiveness, God’s love and praying on the Gospel and the mysteries of Christ.

The first-year novices reunite in late spring to work at Calvary Hospital, located in the Bronx. At Calvary, the novices are trained to serve as cancer care technicians to terminal cancer patients.

In early June, each novice returns to his respective province for ordination and Province Days. Finally, he returns to Syracuse for a period of reflection and rest, and after that, the opportunity to visit his family.

The second-year novices live in Syracuse during the first semester and participate in two classes and selected seminars. In addition, they serve in local ministries.

O’Brien served as programming assistant at the Spiritual Renewal Center in Syracuse from September to December. He recently gave a presentation at the center’s Advent Evening of Renewal. He spoke about how one can prepare for the coming of Jesus.

O’Brien also works in jail ministry at Midstate Correctional Facility in Marcy every other Tuesday, leading a Bible study group. “I find it rewarding,” he said. “It’s wonderful to meet people who are interested in deepening their relationship with God.”

From January through May of their second year, the novices work full-time at a Jesuit apostolate.

In June, they return to Syracuse for a vow retreat lasting eight days in preparation for their profession of perpetual vows.

At the end of this two-year period of prayer, work and study, the novices pronounce their vows, either as a brother or as a scholastic who will prepare for priestly ordination. The vow ceremony takes place in mid-August.

Patrick Nolan, second-year novice at St. Andrew Hall, served as visitor advocate at the Onondaga County Justice Center. In addition to praying, reading from the Bible and talking with the inmates, Nolan acts as a go-between to pass along messages of love and support between the inmates and their families.

Nolan said that even though he hasn’t professed his vows yet, he has been living them. “The high points [of the Jesuit novitiate] for me have been finding Christ in the various ‘experiences’ where I have served: in the jail, at Francis House, at Calvary Hospital, in West Virginia and at Cathedral Academy at Pompei,” he said. “Another high point is the encouragement that I receive from my novice master and spiritual director, the staff, my brother novices, my family, friends, former co-workers and other Jesuits.”

Even though Nolan is a native of Massapequa, N.Y., he explained how he believes his vocation began in Syracuse. His favorite uncle, Father James Dolan, SJ, is a Jesuit priest, and when he served as director of Christ the King Retreat House, he hosted a family reunion there every ye
ar. Nolan helped his uncle serve at the family Masses held during the reunions.

“As I grew older and became more involved in my parish as an altar boy and as student council president for my parochial school, I became more and more aware of God’s love for me and my special place in serving His church,” said Nolan.

Later, when Nolan attended Loyola College, he admired the Jesuits he encountered in his classes and at Sunday liturgies. In his senior year, Father Tim Brown, SJ, who served as Jesuit Class Moderator, especially impressed him. “I was impressed by his example as a Jesuit priest, specifically how much he was able to give of himself and how happy he seemed,” said Nolan.

Nolan said he felt honored when he received an invitation to a “Come and See” event at the Jesuit Residence in his senior year.

After graduating, Nolan lived in New York City and worked in the sports marketing industry. “I began to search for something more and would look back with God’s blessings on my life,” he said. “This feeling of gratitude fueled my desire to reconnect and express interest in the Jesuits.”

Nolan stressed the importance of fostering vocations. “If you know of someone who you feel might make a good priest or religious sister or brother, tell them how you feel,” he said. “It will make their day. Sometimes we need encouragement from someone else to realize what might already be within us.”