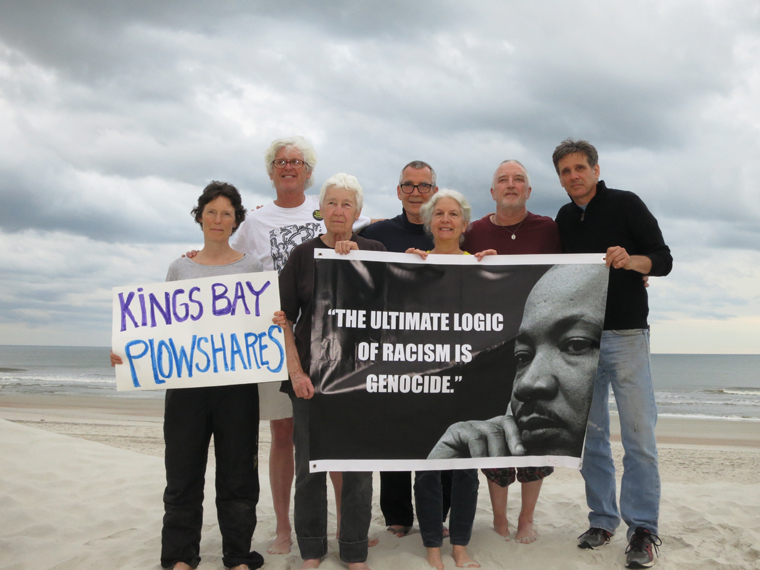 CLEVELAND (CNS) — A Kings Bay Plowshares participant convicted of federal charges stemming from a 2018 protest at a Georgia naval submarine base received a 21-month prison sentence.

Colville previously was in jail for 15 months as he awaited trial and the judge applied his time served to the sentence.

Wood also ordered Colville, a member of the Catholic Worker Movement, to pay a share of the $33,503.51 the Navy said it cost to clean and repair the damage caused by the symbolic action against the nuclear weapons believed to be at the base.

Colville told the U.S. District Court for the Southern District of Georgia in Brunswick during the hearing that he believed his family and the wider community “have a right to live without a nuclear gun on hair-trigger alert held perpetually to our heads.”

“That right is ours, both by birth and by law. It is neither granted by courts, nor denied by them, but this court’s refusal to defend that right — or even recognize it — has … placed it firmly in a posture of criminality,” he said.

He concluded his statement by reading “A Prayer for Our Earth” by Pope Francis that was included in the 2015 papal encyclical, “Laudato Si’, on Care for Our Common Home.”

Four of the Kings Bay Plowshares participants are in prison for their role in the protest rooted in the Book of Isaiah’s call to “beat their swords into plowshares” that took place the night of April 4-5, 2018.

Elizabeth McAlister of New London, Conn., was sentenced to time served after spending more than 17 months in prison awaiting trial.

The seventh participant, Jesuit Father Steve Kelly of the Bay Area in California, has been in federal custody since his arrest more than three years ago. He was scheduled to appear April 13 in a video hearing before a federal magistrate in Tacoma, Wash., for violating a probation order stemming from another protest at Naval Base Kitsap near Seattle in 2017.

The seven cut their way into Naval Submarine Base Kings Bay in St. Marys, Ga., the East Coast home of the Trident submarine. The Navy’s fleet of Trident submarines carries about half of the U.S. active strategic nuclear warheads, according to military observers.

Military officials have neither confirmed nor denied the existence of nuclear weapons at the base.