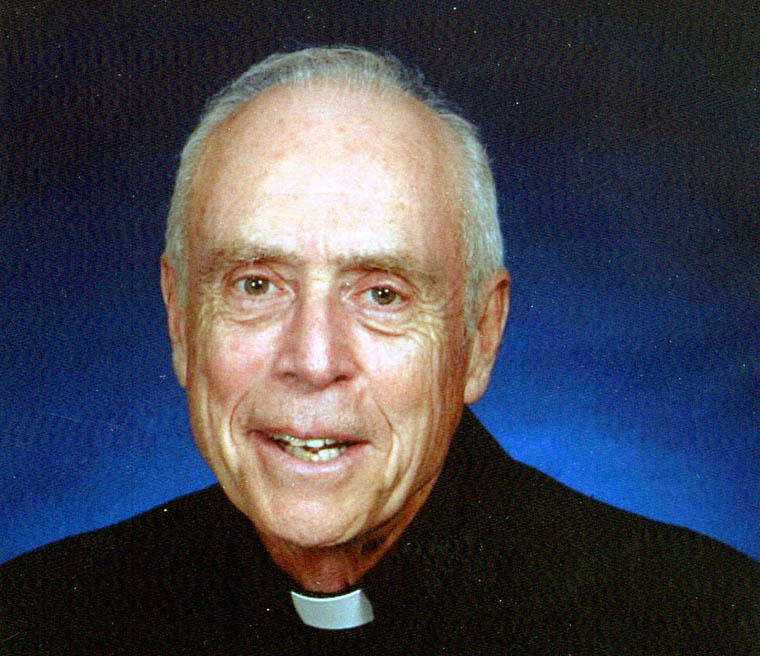 Father Nortz, a priest of the diocese for more than 60 years, entered into his eternal rest April 25. He was 88 years old.

Father Michael Galuppi — a native son of St. Vincent’s who is currently pastor of Our Lady of Good Counsel Church in Endicott — offered the homily at Father Nortz’s Mass of Christian Burial.

Each of us has a heavenly Father and a natural father, and as Catholics, we call many people “Father,” Father Galuppi said. “Today I stand before you to bid farewell to another father of mine, Father Al Nortz, who came here when I was but six years old. That’s when he came to St. Vincent’s — and he, like any good father, has formed me, shaped me and inspired me and encouraged me, and mentored and prayed for me all these years.”

When Father Galuppi first met Father Nortz, however, it was a little scary — he was tall and had a booming voice — and he handed out the report cards, Father Galuppi recalled. Many priests came and went from St. Vincent’s over the years, but Father Nortz was the mainstay, he said.

For the first ten or so years that Father Galuppi knew him, Father Nortz was “a priest of the old school, a man of the Church before the Second Vatican Council, where Father’s word was law, where the buck stopped at his desk,” he said.

But then something happened — Father Nortz had a heart attack. When he returned after his recovery, he had changed, Father Galuppi recalled: “No longer was he the roaring lion, the pastor with the iron fist.” Perhaps it was his brush with death or perhaps he read the writings of the Second Vatican Council while he was convalescing, Father Galuppi mused. “I don’t know,” he said, “but when he returned, he was a different man, a different priest, a very different pastor. It was no longer ‘his’ parish. It was the people’s parish.”

It was then that St. Vincent’s “really took off,” Father Galuppi said, “with NEHDA [Northeast Hawley Development Association] and ministries on the northeast side, with the flourishing that followed RENEW, with learning about Catholic social justice, being a vibrant force for good in this neighborhood, and with the welcoming of our Sudanese brothers and sisters. For my memory, these were Father Nortz’s finest years.”

While discerning his call to the priesthood, Father Galuppi had local examples in the ministries of the Franciscans and the Jesuits, “but my heart was here, and it was really drawn here by the man whom I had called Father for so many years, the man whom I had seen minister firsthand, and change and change again in response to the needs of that ministry,” he said.

When he asked Father Nortz about the priesthood, “He looked me straight in the eye and he said, ‘Michael, I wish I were starting all over again. This is the most exciting time to be in the Church.’ For me, that was the greatest testimony of all,” Father Galuppi said.

Thanksgiving was Father Nortz’s favorite Mass of the year, he noted. “For him, it was a time of pure, unadulterated praise, without fanfare, without obligation even, simply a time to come together and give thanks to God in the community that he loved so well.

“That’s what we’re doing here today, that’s what gathers us here today: to give thanks to God for the life and for the ministry, for the ups and the downs, the deaths and the resurrections, for the full and rich and yet very simple life of Alfred E. Nortz. … We give thanks that, just as Jesus was sent to lead us to the Father, that he sent us ‘Big Al’ to shepherd, to guide the beloved people of St. Vincent’s toward the fulfillment of life in God,” he said.

Along with the gifts, items special to Father Nortz were brought to the altar by family and friends. Among the items were family photos; his walking stick; the chalice, cross, and stole he used to celebrate family Masses; his beloved breviary and Bible.

Her brother was “totally focused on priesthood” and called to serve others, she said. She shared reflections on her brother from family, friends, and colleagues: that he never wavered in his values, that he was “a rare gem” who did the work of the Gospel quietly but consistently,  that he was ahead of his times in solidarity with the poor and marginalized.

Father Nortz lived a simple but generous life, Sister Monica said. He never spent money on himself, but each month wrote checks to 21 charities — in total, more than $2,000, she shared.

“I think the pope and Al would have gotten along famously,” Sister Monica said. She highlighted Pope Francis’ various statements on priests and pastors — that they be prayerful, compassionate, and humble, and have the “smell of the sheep” they care for.

“I believe Father Al Nortz, my brother, was nothing but an authentic shepherd,” she said. “Amen.”

In addition to Sister Monica, Father Nortz is survived by his brother Joseph (John Sullivan) of Lakeworth, Fla.; Joan A. Nortz of San Francisco, Calif.; sister-in-law Barbara Nortz; and many nieces, nephews, and cousins.