Ben Merchant is a music-maker on a grand scale

Most people who enter a church are drawn to the altar with the center aisle leading the way. Perhaps they seek a closer inspection of the ornate paintings, statues and tapestries. When Ben Merchant enters a church, he walks halfway down the aisle, turns around, and looks for the pipe organ tucked in a corner or hiding in the choir loft. 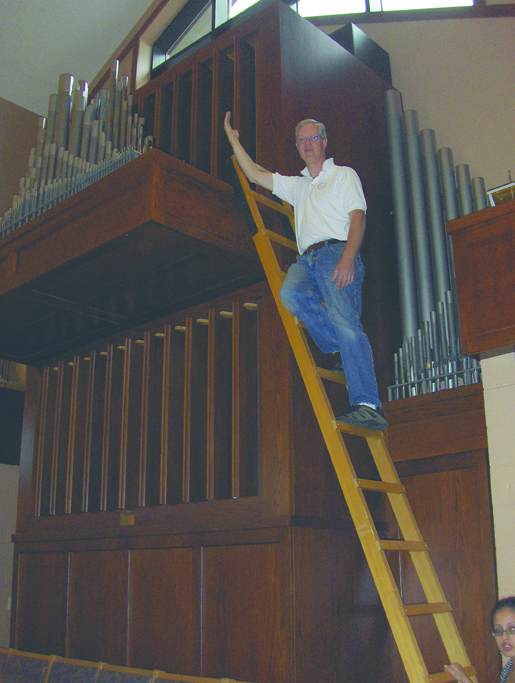 Merchant loves pipe organs for a good reason. He’s spent most of his life building them.

Merchant’s dad, an electrical-mechanical engineer, taught his son how things worked and how to fix them while he was growing up. “As a result, I’ve always had a knack for working with tools, and things mechanical and electrical,” Merchant says. “Additionally, my dad is an excellent carpenter who I learned the rudiments of wood-working from.”

Merchant inherited his mother’s love of music and was involved in a church with an active music program. His fascination with the church’s organ intensified his interest in how they worked. In college he studied piano technology and harpsichord building. “I was able to combine my mechanical skills with my love of music,” he says.

While most undergraduates toil in libraries, Merchant spent one semester rebuilding a grand piano. “Another semester I built a small harpsichord,” he said. “I was particularly attracted to the harpsichord with its brittle, brilliant tone.” Merchant begins, “Bach has always been my favorite composer, and I fell in love with his many compositions for harpsichord. I thought I’d died and gone to heaven, the first time I heard a live performance of the Goldberg Variations.”

He also studied voice during college, and sang in a choir at a cathedral in Albany for four years. Merchant thought the music was challenging but was also of a very high quality. He learned and performed a different Mass setting each week. “I had never been exposed to such beautiful music on a weekly basis,” he said. “Singing there changed my life,” he said. “Beautiful church music is to me, literally, soul-soothing. I became, and still am, a church-music junkie!”

Upon graduation Merchant landed two jobs. One was for an organ builder; the second position was working as an apprentice to a harpsichord maker. He worked at both for several years learning the basics of organ and harpsichord building.

In 1976, he enrolled in a graduate program at Syracuse University. “As part of my degree, I even arranged to study several famous historic harpsichords at the Smithsonian Museum,” he said. “I also attained an assistantship at SU, where I taught courses on the history of pipe organ and harpsichord building.”

At SU he met Rob Kerner, who had just completed his degree in pipe organ performance. In 1978 they formed a partnership: Kerner and Merchant Pipe Organ Builders, Ltd.

Initially, their business was small, working from the basement up. “I had been collecting used woodworking machines for a while, and we set them up in the cellar of my house,” he said. “In retrospect, I wonder how we survived. The first year in business I made about $3,000!”

Merchant wanted to build both pipe organs and harpsichords, but it was apparent that there was more of a demand for servicing and building only pipe organs. “In the early 1980s we picked up the contract to service the pipe organs at the Eastman School of Music,” he said. According to Merchant, George Eastman was a big fan of the organ. He had one in his house, and the school he founded has one of the largest and finest organ departments in the world. Merchant said the fulltime curator of the 17 pipe organs at the school was unable to maintain them. Merchant’s business partner eventually accepted the curator position. Merchant kept the company name and maintains a cordial relationship with Kerner, occasionally using him as a consultant.

Merchant, 56, has been in business for over 31 years with eight employees, and occupies a building on Johnson Street in East Syracuse. They maintain hundreds of pipe organs in central New York, and have built or rebuilt dozens of instruments.

It hasn’t all been smooth sailing however. In 2005 their building caught on fire and was nearly destroyed. Merchant said it took almost an entire year dealing with contractors, insurance adjustors, inspectors, and architects, while trying to generate a revenue stream and stay in the black. “The good news is that we were able to make a number of upgrades and improvements to our building with the insurance money,” he said.

The bulk of their income is from rebuilding, restoration and upgrades. At Holy Cross Church in DeWitt, Merchant received a contract to move the organ, store it, expand it and upgrade the controlling system with a new fiber-optic computerized system. They also have over a hundred churches under tuning and maintenance contracts. They tune the organs once, twice, or in some cases, three times a year.

Merchant said the majority of the organs they work on are in churches. They also maintain pipe organs at a number of universities and colleges around CNY. They even maintain a few small organs in peoples’ homes.

If you wonder about the construction of a pipe organ, you’re not alone. They are complicated, made of wood, leather and metal. Merchant doesn’t manufacture his own metal pipes, but he does make all of the wooden ones. “Our company tries to make as many of the components ourselves, but if I find a supplier who can make the part cheaper, I will buy it from them,” Merchant said.

Merchant feels organ building requires knowledge and skill in several disciplines. Organs are visual works of art, or sculptures assembled right into the building. Good organ builders require a feel for design and style. After viewing his work it’s evident he knows what he’s talking about.

“Early in my career, I thought that how organs sounded was more important than how they looked. When I go back to some of my earlier installations, I think they look utilitarian and clunky,” he said. “It took me many years to learn that if an organ looked beautiful it would sound better. The visual opinion of the organ influences how the audience hears it. Now, I construct organs to look and sound beautiful.”

There are many facets to building pipe organs. One that Merchant enjoys is working with the pipes and sounds. An organ builder needs good ears and an understanding of how sounds are blended.

“Because I work almost exclusively in churches, I am sensitive to coupling the music to the liturgy,” Merchant said.

In addition, a successful instrument should fit the acoustics of a particular room. “I have heard well-built instruments that were unsuccessful because they couldn’t overcome bad acoustics in a room,” he says. “I have also heard mediocre organs sound fantastic because of great acoustics.” Merchant said that first-rate organ building equals an instrument that blends with its setting both visually
and acoustically. He feels the trick is to correctly scale the pipes ahead of time to fit a particular room.

A large organ project can take almost a year to complete. “One of my favorite times is hearing the organ played well after it is completed,” he said. At the end of a project, Merchant has an idea of how the instrument should sound. “But as I work with the pipes, the sound takes on a life of its own,” he said. “I particularly love to hear a good organist play one of my instruments. I appreciate when they take the time to figure out how I constructed the sound and how they can use it. I’m delighted when they come up with a combination that hadn’t occurred to me,” he said. Merchant says it’s all about the music. After learning about his passion in building pipe organs, it’s more about the love that goes into making them.