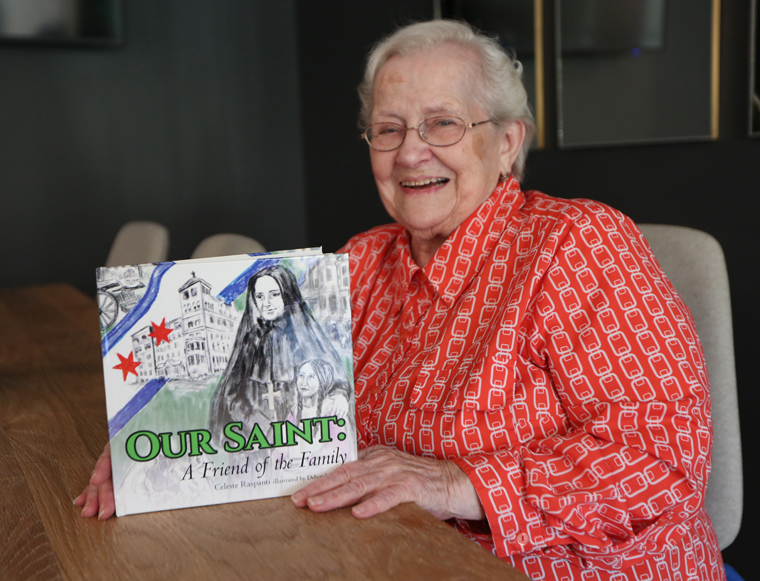 ST. PAUL, Minn. (CNS) — Celeste Raspanti, a volunteer archivist at the Cathedral of St. Paul, remembers stories her mother told about their family forging a friendship at the dinner table with St. Frances Xavier Cabrini as they helped her minister to the poor in Chicago.

“She drank wine, she ate pasta, she sang songs,” Raspanti said of the saint.

When Raspanti’s grandfather was ill, Mother Cabrini asked to be called if death drew near. “She was holding his hand when he died,” Raspanti told The Catholic Spirit, newspaper of the Archdiocese of St. Paul and Minneapolis.

Those real-life episodes and more in turn-of-the-century Chicago are depicted in a book Raspanti published earlier this year based on her mother’s memories of Mother Cabrini and titled “Our Saint: A Friend of the Family.”

Illustrated by a niece of Raspanti’s, Deborah Zanger, in gray pencil line drawings punctuated with splashes of color, the book can be purchased at the National Shrine of St. Frances Xavier Cabrini in Chicago. Raspanti, 91, said she might have a copy or two on hand, as well.

A major point of the book, which is written simply but is for adults as well as children, is that people who are living with saints often don’t realize it. Nonetheless, the saintly person’s love of Christ and ministry to others are readily apparent, Raspanti said.

“‘I didn’t know she would be a big saint,'” she said her mother, Lillian Caviale Raspanti, would often tell her. “‘She didn’t act like a big saint.'”

But Mother Cabrini helped poor Italian immigrants and others by gathering, growing and distributing fruits and vegetables in the streets of Chicago, and founding schools and hospitals in the Windy City and around the country. She also was the foundress of the Missionary Sisters of the Sacred Heart.

Raspanti’s mother prayed to Mother Cabrini, who died in 1917, even before she was beatified in 1938 and canonized in 1946.

Family members including her mother listened on the radio after Mother Cabrini’s canonization when the archbishop of Chicago, Cardinal Samuel Stritch, presided at a Mass of thanksgiving in Soldier Field.

Raspanti’s book captures the moment by quoting her mother: “A saint,” she sighed. “Imagine that — and she’s a friend of the family.”

That was a time when people were much more aware of saints in the church than what appears to be the case today, Raspanti said.

“In those days, you knew your saints,” she said.

The family friendship with Mother Cabrini began with the future saint searching the streets of Chicago for food for the poor and for one of the hospitals that she founded — Columbus Hospital in the Lincoln Park area.

Mother Cabrini often sought Italian immigrants who could help others from Italy, and she found the fruit and vegetable warehouse owned by Raspanti’s grandfather, Celestino Caviale, on South Water Street near the Chicago River, Raspanti said.

Raspanti’s mother was asked to accompany Mother Cabrini on her route, which turned into a weekly routine, using a cart provided by Caviale. The route ended with dinner back at the Caviale home, with Celestino, his wife, Elizabetta, Lillian and her five siblings.

After Mother Cabrini died at Columbus Hospital, the hospital kept the room where she passed away just as she had left it, with a cast iron bed and a pitcher and bowl on a washstand.

In the years following her death, pilgrims visited, and families with babies born in the hospital were offered the opportunity to pray and place those babies in Mother Cabrini’s bed. Raspanti said her mother placed her in that bed when she was born in 1928.

In 1955, Cardinal Stritch consecrated the National Shrine of St. Frances Xavier Cabrini, which was built in the heart of the hospital complex. The hospital closed and was torn down in 2002, but the shrine and Mother Cabrini’s room were preserved. They reopened in 2012 and remain open today.

With the approach of All Saints’ Day Nov. 1 and Mother Cabrini’s feast day Nov. 13, Raspanti reflected on the importance of saints in people’s lives and hearts. She thought about the way her story illustrates that saints can be in any community, anywhere, living quietly but in concert with God.

“She didn’t act like a saint, she didn’t wear a halo,” Raspanti said of Mother Cabrini. “But she loved God, and she served other people. She did what she could for as long as she could.”