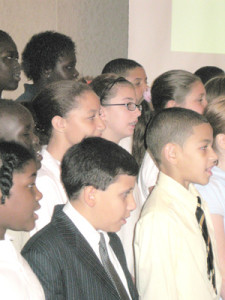 The latest luncheon was Oct. 29 at the Sheraton at Syracuse University. Those attending ranged from newcomers to long-time supporters. The goal of helping students at Cathedral Academy at Pompei (CAP) further their Catholic education by supporting them with tuition assistance is what they had in common.

Kathy Fedrizzi, development director for GAS, spoke first introducing CAP Principal Charles LaBarbera. Hired in 2005, LaBarbera followed principals who were mostly women religious. He was at the helm when Cathedral School and Our Lady of Pompei School came together to form CAP and it is his kind and positive presence that has enabled the diverse student body to become a true mirror of Syracuse’s population. CAP’s Web site reveals that there are 20 countries represented in the student body and the school offers both Spanish and Mandarin for language options.

“His kindness, respect and rapport with the families, along with his own personal commitment, serves as a role model to the students,” Fedrizzi said in her introduction.

LaBarbera marveled at the students at his school saying they love coming to school so much that they actually come on snow days.

“These students run into to school every morning, they don’t run from it,” LaBarbera said.

CAP is the last Roman Catholic school in an urban setting in Syracuse. The school has turned around its graduation rates, something Father Champlin worked hard to accomplish. Many of the school’s graduates have gone on to Catholic high schools and then from there, to major colleges and universities.

Patricia Ruggiano Schmidt, literacy professor at Le Moyne College, is working with CAP in a development capacity. She spoke at the luncheon also, highlighting CAP’s position as an “anchor” in its north side neighborhood.

“We can be a national model of urban education,” Schmidt said, “but we need your partnership to do that.

The luncheon’s main presenter was Dr. Fred Pestello,the first non-Jesuit president of Le Moyne College. The college forged a partnership with CAP a few years ago. Pestello was appointed in July 2008 and much has happened since then. Le Moyne received a major gift of $50 million upon the death of both Kathleen and Robert McDevitt this past year. The gift has had a far-reaching effect, Pestello said.

Besides the positive impact of such a large sum, the college’s capital campaign surpassed its goal by nearly double, Pestello said. The endowment nearly doubled and Pestello said, “There may not be another college in the country that can say that.” And, the enrollment numbers this fall were the highest Le Moyne has ever experienced.

“We made the Princeton Review’s top colleges in the U.S. for the first time,” Pestello said. “Things are certainly different than they were just one year ago.”

Pestello explained that when he first arrived, the college was dealing with serious financial issues.

He discribed the couple as simple and unpretentious. Their fortune was founded in IBM stock that Robert McDevitt’s mother had received and then the couple built upon. McDevitt was a fourth generation funeral home director who had a solid Catholic faith. There weren’t many who knew the man was the largest single shareholder of IBM stock. Today his $50 million gift to Le Moyne is actually worth $60 million.

“Why are things going so well at Le Moyne?” Pestello asked. “A lot of this has to do with a modest couple who lived a deep faith which will ultimately touch hundreds of thousands of lives.”

Pestello’s remarks describing the effect the McDevitts had was not lost on the GAS luncheon crowd. It parallels what GAS supporters do for the students at CAP.

Pestello ended his talk by saying that Father Champlin was a true visionary “who knew the best thing we could give these young people is hope…. We owe it them to continue to give.”

The chorus of CAP led by music teacher Jim Stanley entertained the noon gathering with a few songs. Carrying on a tradition, the children were also greeters and speakers at the event.

Anyone interested in finding out more about the Guardian Angel Society or Cathedral Academy at Pompei can call (315) 422-7218.