My Place in the Sun, March 23: Stations of the Cross 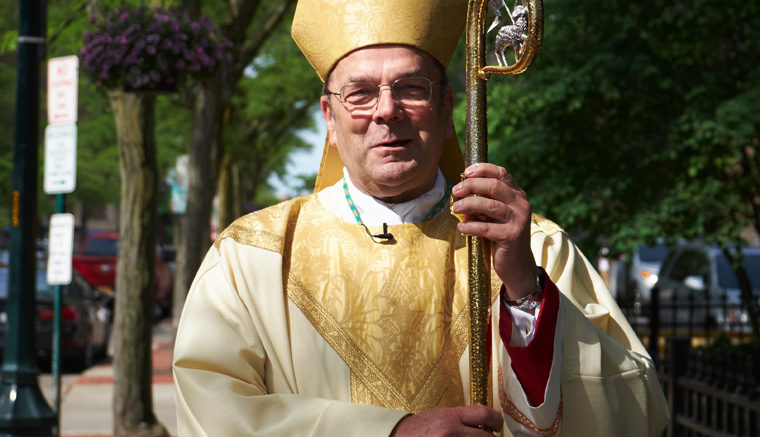 For many of us the Stations of the Cross are synonymous with Lent, Holy Week and, especially Good Friday. The devotion is also known as the “Way of the Cross,” and the “Via Dolorosa.” The tradition for this devotion dates back to the ancient practice of making a pilgrimage to the Holy Land on foot in search of the special graces attached to the land where Christ lived. As the pilgrimage drew to a close, the pilgrims would follow the Via Dolorosa, or the Way of Sadness –— the route which, according to tradition, Jesus took through Jerusalem to Calvary with His cross.

When wars prevented Christian pilgrims from visiting the Holy Land, artists created works depicting scenes of Christ’s journey to Calvary. The faithful installed paintings or sculptures at intervals along a procession route, inside the parish church or outdoors. The faithful would walk the entire route, stopping to pray at each “station.” Over time, the Stations of the Cross became standardized, encompassing the fourteen that we have today. Images of the Stations (or simple crosses representing them) are on display in almost all Catholic churches, and many retreat centers, Christ the King among them, have outdoor stations.

The Second Vatican Council pointed out clearly that the life of the Church centers on the liturgy, above all the Mass and sacraments. In the wake of the Council, devotions such as Jesus present in the Blessed Sacrament, veneration of the Blessed Virgin, the recitation of the rosary and the Stations of the Cross tended to disappear from the Church’s normal round of worship in many churches. It is worth noting that this was not the intended consequence of the Council’s teaching on the liturgy. Nonetheless, popular devotions slipped into disuse.

Today, over 50 years removed from the conclusion of the Second Vatican Council, we are experiencing a revived interest in devotional practices. The focus is still on the liturgy, but time-honored devotions are promoted also. The Catechism of the Catholic Church recognizes the “religious sense” of the Christian people that has always found expression in various forms of piety surrounding the Church’s sacramental life, such as pilgrimages, processions and the Stations of the Cross (Cf. 1674).

On the Friday after Ash Wednesday, I led the Stations of the Cross at St. Matthew’s Church in East Syracuse. I was pleased that many were present for the stations, including a number of younger people.

The tender, rhythmic repetition of the refrain, “We adore you, O Christ, and we bless you. Because by your holy cross you have redeemed the world,” reminded us we were beginning a 40-day journey in which we would strive to keep our eyes and hearts fixed on Jesus. What better way to make this journey than to walk from station to station and reflect on what Christ’s journey cost Him and what it meant for us?

The Stations of the Cross are vivid images of Jesus and His humanity. We see His physical weakness, the need for assistance from others, His vulnerability and His concern for others in the midst of His suffering. “Every detail of His Passion revealed something more of His character as a man -— not only His heroism and His majesty but His human necessities, and the human limitations which He deliberately adopted as part of His plan of love in order to be able to dwell in us as we are, with our limitations and physical necessities and interdependence on one another” (Caryll Houselander, The Way of the Cross).

We can reflect on the people depicted in the stations, the wayside crowd, the soldiers, Mary, Veronica, Simon of Cyrene, and the weeping women of Jerusalem. With whom do we identify? How do we respond to Jesus as we walk along the path to Calvary with Him?

The Stations of the Cross are not only about a past event. Many today united with Christ walk the way of suffering and sorrow. As we make the stations we can reflect on the cross that we bear, for every faithful disciple must carry the cross. We can pray for strength and courage and for the steadfast hope that assures us that the end of the journey is new life. In addition, let us not fail to pray for our brothers and sisters in war-torn countries who walk the Way of Sadness often facing persecution for their faith.

A healthy spirituality is centered in the liturgy and includes popular devotions. Lent is a good time to make the Stations of the Cross. You can visit your parish church and make the stations privately or attend a communal celebration with others. The stations can also be performed privately even at home. There are free or inexpensive pamphlets for this purpose. I am sure your pastor would be helpful in making this resource available for those interested. I have also asked the Catholic Sun to provide a list of the stations for you. Prayerfully reflecting on the stations, using your imagination rather than an illustration, can be a rich experience.

As we prayerfully walk The Way of the Cross, may we experience anew God’s merciful love for us. “No one has greater love than this, to lay down one’s life for one’s friends” (Jn 15:13).