New deacons ‘realize the dream of their vocation’ 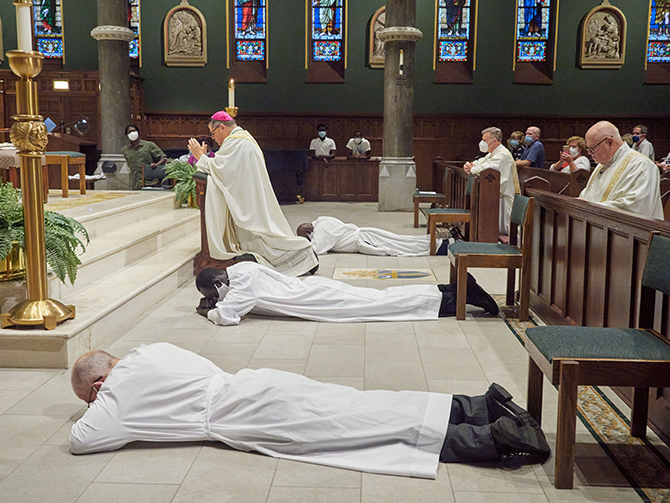 Some of the men being ordained permanent deacons July 20 gravitated to the seated bishop a little early for the laying on of hands, and he appreciated the gesture.

“They just can’t wait,” Bishop Douglas J. Lucia told the delighted congregation, adding that it was a “good thing. It’s a good thing.”

About 40 minutes into the ceremony, the bishop did lay his hands on the head of each man, praying silently as each candidate officially became a permanent deacon, appointed to go out and serve the diocese with humility and zeal.

“The best thing that has ever happened to me is to be ordained in the Catholic Church,” said new Deacon Thomas Murphy, Jr. of St. Vincent de Paul Church in Syracuse.

Numbering 14 members, the 2020 class of permanent deacons is the largest in diocesan history. The class was ordained in four identical ceremonies July 20-23 at the Cathedral of the Immaculate Conception in Syracuse. The congregations were limited in number and everyone wore a mask because of  COVID-19.

Asked to summarize this class, Deacon Dr. Robert Fangio, Director of Deacon Personnel, said: “Diverse. For sure, very diverse in their gifts, their talents, their contributions … to our community in many beautiful and varied ways. .. They’re enthusiastic and full of passion.”

The Rite of Ordination, conducted amid vocal, organ, and cello music, included the Election of the Candidates, in which Deacon Thomas Cuskey, Director of Deacon Formation, testified to their worthiness; the Promise of the Elect, in which they pledged to follow the example of Christ; the Litany of Supplication, during which the elect prostrated themselves; the Laying on of Hands and Prayer of Ordination, during which the elect knelt before the bishop; the Investiture with the Stole and Dalmatic; the Handing on of the Book of Gospels; and the Fraternal Kiss — the new deacons were hugged by their brother deacons.

The ordination program honored the memory of Father Louis F. Aiello, Jr., the former Director of Deacon Formation who died in 2019: “On behalf of all deacons who were formed by Father Lou, the ordination class of 2020 expresses their gratitude for his friendship, guidance, and support.”

The day before his ordination, he said, was a “deep day of prayer” to St. Teresa of Avila and St. Therese of Lisieux: “I pray to both of them a lot. And I would say they got me through Saturday,” when he was feeling nervous about the Monday ceremony.

Two of the newly ordained men, Peter Lual and Aleu Tong, both of whom also serve at St. Vincent de Paul, had left their native South Sudan because of its civil war. Deacon John Falge had tutored them in English and helped them study for exams. “So I was thrilled that today was their day,” Deacon Falge said. “Really nice.”

When Bishop Lucia laid his hands on his head, Deacon Tong had the feeling of “a special day.”

To Deacon Lual, ordination day proved that this is a land of great opportunity. He said, “I was born again. … Now I am very, very happy.”

And he credited Father Aiello too: “He’s still here in our heart.”

Deacon Kirk Lallier, of Sacred Heart and St. Mary, Our Lady of Czestochowa Parish in New York Mills, greeted well-wishers outside the Cathedral after his July 21 ordination. “I feel relieved, inspired, and full of the Holy Spirit,” he said. The new deacon will be ministering in his parish. “I’m ready to go,” he said.

Asked to cite highlights from his July 22 ordination, Deacon Larry Messina, of Pope John XXIII in Liverpool, said: “Just the humility of it all, of being there to serve the Lord and seeing the people, seeing my family and my friends.”

For highlights, Deacon Daniel Reynolds, who serves as the Pastoral Associate at St. Margaret in Homer, cited “the laying on of hands and the laying down [in prostration], and when the bishop announced the Holy Spirit was coming down upon us; at that moment, you kind of take it all in and you realize ontologically you’re a different person than you were when you walked into church.”

He said the diaconate is a “call, but it’s not just a quick call. … That call is ringing for a long time and you try to answer it and you try to take it all in.”

Of the bishop’s instruction to observe constancy in prayer, he said, “You’re always in communication with God. You know when you talk to yourself, you also share that with God.”

The ordination highlight, he said, was probably the laying on of  hands, “just like they did 2,000 years ago.”

His time in diaconate studies went extremely fast, he said: “I love the school; the program they have is excellent; the classmates, you really love them — the camaraderie between everybody, excellent program.”

The new deacons enjoy being together and they may institute monthly gatherings, even though the years of class attendance are over.

“We’re happy to serve,” Deacon Lupia said. “That’s all we want to do, we want to serve.”

Following the July 23 ordination ceremony, Deacon Matt Lumia, of St. Michael – St. Peter Church in Syracuse, said, “It feels amazing…. it feels right.” He is most looking forward to “sharing the faith with families and children” in his new ministry.

Deacon Lumia felt Father Lou’s presence during the Mass. “I feel his presence and those that aren’t with us every day. I spent the morning at his gravesite. He looked out for me. And he still does,” he said.

Deacon John Trendowski, of Our Lady of Hope Church in Syracuse, said he “really felt the Holy Spirit within the church today,” along with the presence of Father Lou. “He provided so much inspiration to all of us as we moved forward throughout the process and we could not thank him enough. I’m sure he was looking down at us today and smiling.”

The new deacon was looking forward to some of his first acts of ministry: preaching the homily at the upcoming weekend’s Masses.

Deacon Cuskey smiled as he watched the new deacons offer blessings and congratulations to one another after the final ceremony July 23. A deacon for 10 years himself, he offered some advice for his newest brothers: Keep your priorities in order and put your family first, and “make sure that everything that you do is something that you enjoy. As hard it might be, as difficult as it might seem …, there’s grace and true enjoyment that comes out of everything that you do.”

The class of 2020 was the first ordained during Deacon Cuskey’s tenure as Director of Deacon Formation; previously the associate director, he had served as interim director since Father Aiello’s death and was appointed director effective July 1, 2020.

“What a testimony this is to our diocese, to Father Aiello especially for his love and his guidance,” he said. “All of these men who were ordained this week came here because he made that possible — for them to realize the dream of their vocation. This is a glorious night for our diocese.”