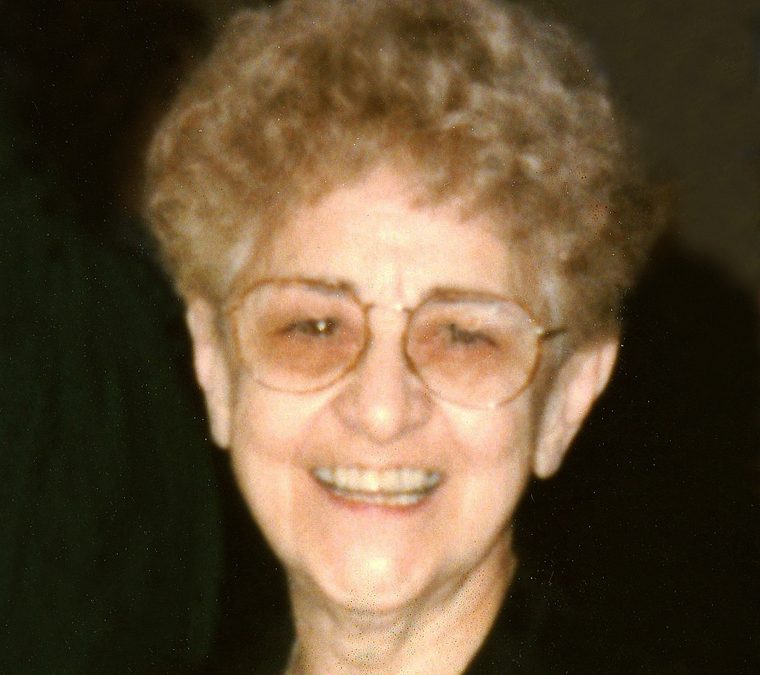 Sister Gloria was born in Troy on June 5, 1927, daughter of the late Anthony and Mary Carchia DeCotis. After graduating from Catholic Central High School, she entered the novitiate of the Sisters of St. Joseph in Troy on March 19, 1946, and professed final vows on Aug. 15, 1951.

For 23 years, she taught elementary grades and home economics and math in secondary schools in the Albany and Syracuse dioceses.

In 1971, she began serving in social ministry and neighborhood outreach ministry in Syracuse at St. John the Evangelist Parish, the Northeast Hawley Development Center, and St. Vincent de Paul Parish.

In 2012, Sister Gloria retired to St. Joseph’s Provincial House where she volunteered in the Carondelet Hospitality Center, greeting guests with warmth and acceptance.

In 2012, when Sister Gloria had made retirement plans to move from Syracuse to St. Joseph’s Provincial House, friends held a farewell party at the old St. Vincent’s School. Certain words describing Sister Gloria were repeated over and over again: “irreplaceable,” “unconditional love,” “our biggest advocate,” “authentic love for Christ, especially in caring for the broken and the fragile,” “making sure no one is ever locked out,” “strength built upon her utter humility.”

Wherever Sister Gloria went, she brought her deep commitment to and passion for the Gospel message and her call to act for the sake of justice. In the classroom, in her social ministry, and in her neighborhood outreach work, Sister Gloria brought “the active and inclusive love” to which the Sisters of St. Joseph are called. At meetings, through letters to the editor, in her interactions with clients and guests, she addressed racism, violence against women, human trafficking, and the need for a consistently pro-life and nonviolent culture.

Throughout her daily life, Sister Gloria was keenly grounded in the reality of God’s Word. She leaves us a legacy of determination in bringing God’s unifying love to a world in need, and we will miss her greatly.

Sister Gloria is survived by her sister-in-law, Shirley DeCotis; several nieces and nephews and their families; many friends; and the Sisters of St. Joseph of Carondelet. In addition to her parents, Sister Gloria was predeceased by her brothers, John (her twin) and Frank DeCotis; and her sisters, Louise DeCotis, Mary DeCotis, Molly Burnside, and Rose Smith.

Due to the continued health concerns regarding the COVID-19 pandemic, there will be no public funeral services for Sister Gloria at this time. A Memorial Mass will be scheduled at a later date.