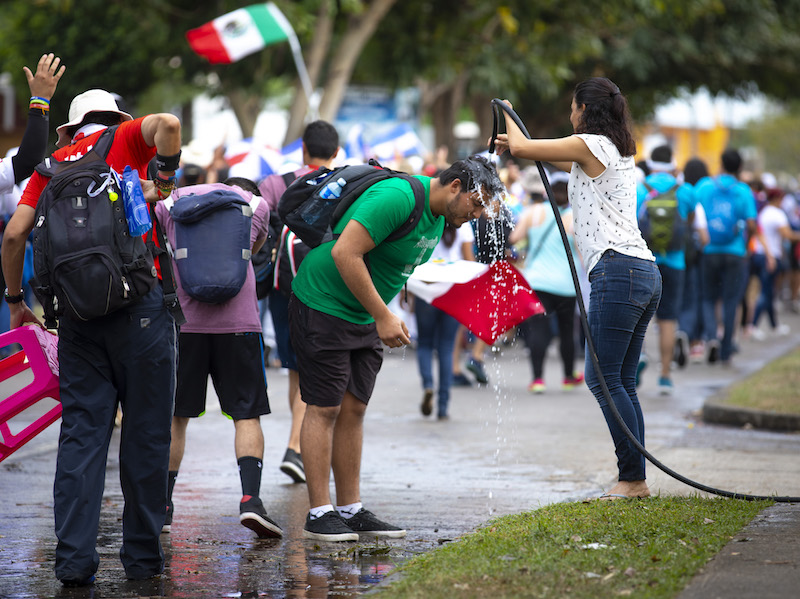 A Panama City resident helps a pilgrim cool down in the sweltering heat as he makes his way to the World Youth Day vigil Jan. 26, 2019. (CNS photo | Chaz Muth)

PANAMA CITY (CNS) — As thousands of pilgrims streamed through the neighborhood of Las Acacias en route to the World Day Youth vigil, those from Nicaragua and Venezuela received special cheers and applause as they carried the flags of their respective countries.

“Venezuela without Maduro!” someone yelled in the crowd as the pilgrims carried the flag of the South American nation.

“Thank you, Panama!” they yelled back.

Venezuela is facing political upheaval, including some attempts at deposing President Nicolas Maduro, and a spiraling political and economic crisis.

Likewise, Nicaraguans carrying their flag received loud cheers as they went by. The Catholic Church in that country has been trying to broker peace after a proposal to change the social security system in 2018 unleashed pent-up frustration over the administration of President Daniel Ortega.

The political situations of Nicaragua and Venezuela have been difficult to avoid at World Youth Day. Groups of young pilgrims from both nations spontaneously chanted cheers of “Libertad, Libertad!” (“freedom, freedom!”), an expression for which they could be jailed or physically hurt in their home countries.

But the solidarity of the Panamanians was not limited to the political realm.

Residents of Las Acacias neighborhood, which curls around to the venue where the pope joined young people for the Jan. 26 vigil and the Jan. 27 closing Mass, turned out in full force, with banners and water hoses to cool off the pilgrims. Some offered the use of their living rooms, patios and even restrooms for the young Catholics streaming through.

“This is a great blessing to have them here, to have so many of them praying the rosary, singing for us as they go by,” said Elba de Aguero, a resident of Las Acacias.

She showed off a cache of presents some of the pilgrims had dropped off: prayer cards of St. Oscar Romero, stickers from Brazil, a refrigerator magnet from Dubai.

Residents Diego de Gracia and Mauricio Nieto helped hoist a banner on a traffic island in the neighborhood that said: “Welcome, pilgrims.” They cheered the groups marching through, shaking hands and offering high-fives.

“They have brought us so much life, harmony and peace,” Nieto told Catholic News Service Jan. 26. “They’re a blessing.”

While in some countries the thought of tourists coming through leads people to close the doors or leave town altogether, Panamanians welcomed the religious pilgrims. They took to the streets and city parks to teach pilgrims traditional dances, how to use the subway system, and some even physically carried overheated pilgrims who were not used to the heat and humidity into places such as beauty salons to recover.

“We are all brothers and sisters in Christ,” said de Aguero, “why shouldn’t we help?”

A local mosque provided free water to pilgrims en route to an opening event for the pope, and other religious groups — including Hindus — also pitched in to help.

Elizabeth Kaeufer, 18, of Akureyri, Iceland, said the 2016 World Youth Day in Poland was wonderful, but there was something about the warmth of people in Panama.

She said she loved the shows of expression, the spontaneous dancing and singing on the streets, the feeling that there are no strangers. On Panama City’s metro, Latin American pilgrims broke out in song, with guitars and other instruments, en route to the vigil.

“You feel like you’re a part of something huge,” Kaeufer said, “something, a feeling that’s the same for so many people.”

For U.S. pilgrims Sebastian Martin, 18, and Jessica Martinez, 24, of the Diocese of Bridgeport, Connecticut, that feeling was about something more personal.

“I want to stay true to who I am” as a Christian, said Martin, a college freshman, and that was his reason for attending the event.

For Martinez, a teacher, coming to Panama brought her into contact with a wider world of languages and people with different customs and practices but who share her faith. She said attending World Youth Day was about forming a deeper relationship with God — a unique, hard-to-describe feeling she finds while among her peers.