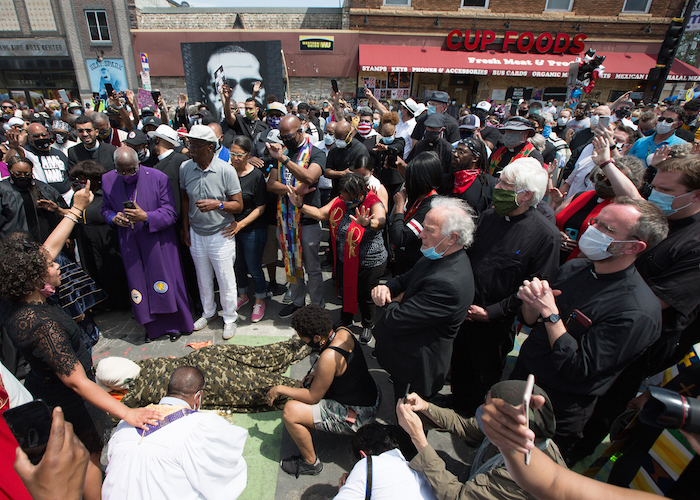 Catholic priests from the Archdiocese of St. Paul and Minneapolis join African American clergy June 2, 2020, to march and pray at the site where George Floyd was pinned down May 25 and died at the hands of a Minneapolis police officer. (CNS photo | Dave Hrbacek, The Catholic Spirit)

WASHINGTON (CNS) — Pope Francis used his June 3 audience and a phone call with the president of the U.S. Conference of Catholic Bishops to express his solidarity and support following days of demonstrations protesting the killing of George Floyd in Minneapolis.

In a June 3 letter to his fellow bishops, Archbishop Jose H. Gomez of Los Angeles told them Pope Francis had called him “to express his prayers and closeness to the church and people of the United States in this moment of unrest in our country.”

Archbishop Gomez thanked the pope “for his prayers and strong words of support at the conclusion” of his Wednesday general audience.

In his livestreamed June 3 general audience, the pope said, “Today I join the church in St. Paul and Minneapolis, and in the entire United States, in praying for the repose of the soul of George Floyd and of all those others who have lost their lives as a result of the sin of racism.”

The pope asked for prayers “for the consolation of their grieving families and friends and let us implore the national reconciliation and peace for which we yearn.”

Pope Francis expressed “great concern” for the “disturbing social unrest in your nation in these past days, following the tragic death of Mr. George Floyd.” Floyd was a 46-year-old African American man whose last moments of life were recorded on a widely disseminated video showing a white police officer in Minneapolis pushing down on his neck with his knee May 25.

“We cannot tolerate or turn a blind eye to racism and exclusion in any form and yet claim to defend the sacredness of every human life. At the same time, we have to recognize that ‘the violence of recent nights is self-destructive and self-defeating. Nothing is gained by violence and so much is lost,'” the pope said, quoting Archbishop Gomez.

In his letter to U.S. bishops, Archbishop Gomez concluded that “in this challenging moment for our ministries and our country, I hope we can all take comfort and gain strength from our Holy Father’s prayers and encouragement.”