Prayers offered for grace to ‘respect, promote, love, and cherish every human life’ 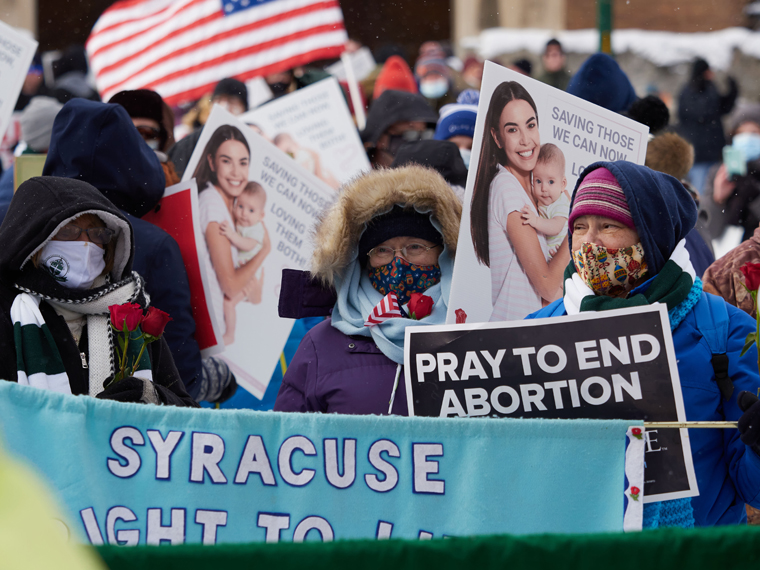 Celebrating a Mass for the Legal Protection of the Unborn Jan. 22, retired Bishop Robert J. Cunningham affirmed, “Today we gather to pray that the inherent dignity of every human being be acknowledged and respected. We envision a world where every life is celebrated, valued, and protected.”

The Mass at the Cathedral of the Immaculate Conception was offered on the anniversary of the U.S. Supreme Court’s 1973 Roe vs. Wade decision, which legalized abortion.

“A genuine respect for life calls us to examine our attitude and actions concerning life beyond the child in the womb. No human life should be considered unworthy of our attention,” Bishop Cunningham noted.

“In the past months and weeks, we’ve seen violence in our cities, in our streets and neighborhoods, in our nation’s Capitol, all leading to personal injury and death,” the bishop said. “Words and actions have appalled us and caused disbelief, sadness, and fear. Relationships that should be marked by collaboration and with the promotion of the common good have been weakened and broken. Sometimes this anger and violence even erupts in our families and among our closest associates.

The following day, a Mass and Holy Hour for Life at the Cathedral preceded the annual Syracuse March for Life. Sponsored by Syracuse Right to Life, the march drew hundreds of participants who walked through the snowy streets of downtown Syracuse, many holding signs bearing pro-life messages.

“Our goal is not simply to change one law or one decision,” Msgr. James Lang, diocesan Vicar for Parishes and the liturgy’s main celebrant, said in his homily. “Our goal is to change the culture. The way in which a society treats a child in the womb or an elderly person nearing their last breath tells you a great deal about that nation.”

The Jan. 23 Mass coincided with the feast day of St. Marianne Cope. Born in Germany in 1838 and raised in Utica, St. Marianne ministered in healthcare and education throughout the Diocese of Syracuse as a Sister of St. Francis. She left Syracuse for Hawaii in 1883 to care for patients with Hansen’s disease (leprosy), serving in that ministry until her death on the island of Molokai in 1918. She was canonized by Pope Benedict XVI in October 2012.

Msgr. Lang held up St. Marianne’s life and ministry as an example of and inspiration for building a culture of life.

“When we walk today we will have just marked the 48th anniversary of Roe vs. Wade. If you agree that Roe vs. Wade is a thermometer of our culture, then also agree that we have a lot of work to do,” he said. “Our efforts will be most successful today if we follow the example of Mother Marianne Cope, whose birthday it is, and simply say, ‘Here I am, Lord.’

“Did you notice that there was nothing simple about Mother Marianne’s life? Each step required a commitment; it was never easy, and building a consistent culture of life is never simple or easy,” he said. “But the truth remains: That the nation’s care for its weakest and most defenseless reflects the true character of the nation.”

On Jan. 22, the chairman of the U.S. bishops’ pro-life committee called it “deeply disturbing and tragic” that any U.S. president would mark the anniversary of the decision that legalized abortion by praising it and committing to codifying it in law.

The Roe v. Wade ruling “denies unborn children their most basic human and civil right, the right to life, under the euphemistic disguise of a health service,” said Archbishop Joseph F. Naumann of Kansas City, Kansas, chairman of the U.S. Conference of Catholic Bishops’ Committee on Pro-Life Activities.

“I take this opportunity to remind all Catholics that the catechism states, ‘Since the first century the church has affirmed the moral evil of every procured abortion. This teaching has not changed and remains unchangeable,’” the archbishop said in a statement released late Jan. 22 in response to a statement on Roe by President Joe Biden, a Catholic, and Vice President Kamala Harris.

Biden and Harris said their administration “is committed to codifying Roe v. Wade and appointing judges that respect foundational precedents like Roe.” They did not use the word “abortion,” but talked about “reproductive health” and protecting access to “health care.”

“In the past four years, reproductive health, including the right to choose, has been under relentless and extreme attack,” they said Jan. 22. “We are deeply committed to making sure everyone has access to care — including reproductive health care — regardless of income, race, ZIP code, health insurance status, or immigration status.”

They added: “Now is the time to rededicate ourselves to ensuring that all individuals have access to the health care they need.”

“Public officials are responsible for not only their personal beliefs, but also the effects of their public actions,” the archbishop said. “Roe’s elevation of abortion to the status of a protected right and its elimination of state restrictions paved the way for the violent deaths of more than 62 million innocent unborn children and for countless women who experience the heartache of loss, abandonment, and violence.”