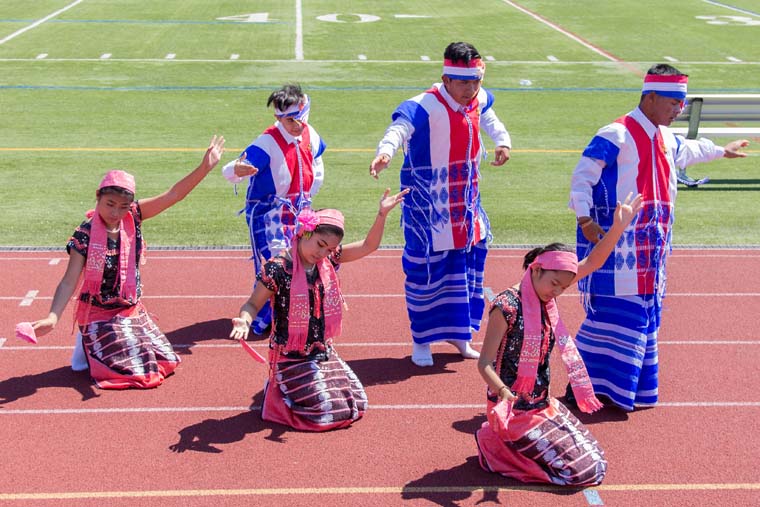 “It’s cool to see how many diverse people are in Syracuse and the gifts they have to share,” said Prill, a graduate of the University of Dayton who volunteers at the Samaritan Center in Syracuse. “It’s inspiring to see how they made a home for themselves here and kept their culture strong.”

That was the point of Syracuse United: A Celebration of Refugee Success, said Maddie Wood,

refuge youth supervisor for Catholic Charities of Onondaga County. Plans for the afternoon event grew out of discussions following President Trump’s orders seeking a temporary travel ban, which “aims to prevent citizens from six majority-Muslim countries from entering the United States for a period of 90 days” and “also asks that refugees wait 120 days before entering the country,” according to a Catholic News Service report.

The Supreme Court could decide this week whether to overrule lower courts, which blocked the policy.

“When the executive order came out, there was a lot of confusion and fear,” Wood said. Relief followed the courts’ blocking of the orders, and “It’s much calmer now.”

In the wake of the executive orders, local refugees wanted to counter anti-immigrant sentiment, she said. “For our students, this was a way to be able to represent themselves,” she said. “They take a lot of pride in their accomplishments and their culture.”

The event comes ahead of United Nations World Refugee Day, celebrated on June 20 to commemorate refugees’ strength, courage, and resilience. “A refugee is a person who is forced to flee his or her home country due to persecution or a well-founded fear of being persecuted on account of his or her nationality, race, religion, political opinion, or membership in a particular social group,” said a U.S. Conference of Catholic Bishops guide to World Refugee Day.

A core teaching of the Catholic Church is “that every human being is created in the image of God and is therefore entitled to dignity and respect,” the guide said. The church “views assisting those in need as a fundamental Christian duty that is derived directly from the life of mercy of Christ, who himself was a migrant and a child of refugees.”

The United Nations estimates 65.3 million people have been displaced worldwide, 21.3 million of whom have been forced to seek refuge in other countries. More than half of these refugees are under age 18.

The Northside CYO and Catholic Charities typically settles about 600 refugees a year; in 2016, they settled 757 refugees. The largest groups coming to the Syracuse area are from Syria, Somalia, and Congo.

Syracuse United featured refugees from more than 10 countries. Sales of food, henna tattoos, and a raffle will benefit refugee services.

Aziza Zahran, a Palestinian Muslim who lives in Manlius, attended the event with her 7-year-old son, Sefian. She didn’t experience much diversity growing up in Syracuse. “It’s nice to see how diverse we’re growing, with lots of languages and religions.”

Zahran wants her son “to know there are other people who are different from him and that’s OK,” she said.

Ashley Langhals, a JVC participant working at Catholic Charities’ Vincent House, sympathizes with the refugees’ fear about immigration bans. “Being Catholic means we’re called to love everyone and that means welcoming them into our culture and our space,” she said.

Tables and a chain link fence displayed evidence of young refugees’ success in Central New York: certificates, medals, and trophies for achievements in academics, athletics, and citizenship. Also on display were several personal statements refugees wrote in an ESL class.

The statements offered a peek into the circumstances that led these young people to become refugees: a car explosion in Baghdad, Iraq, that seriously injured one student’s father; witnessing violence and death in Rwanda; life in Kakuma, a refugee camp in Kenya.

“Life is precious,” wrote one student. “I hope that every day I will remember how lucky I am to be alive and with my family.”