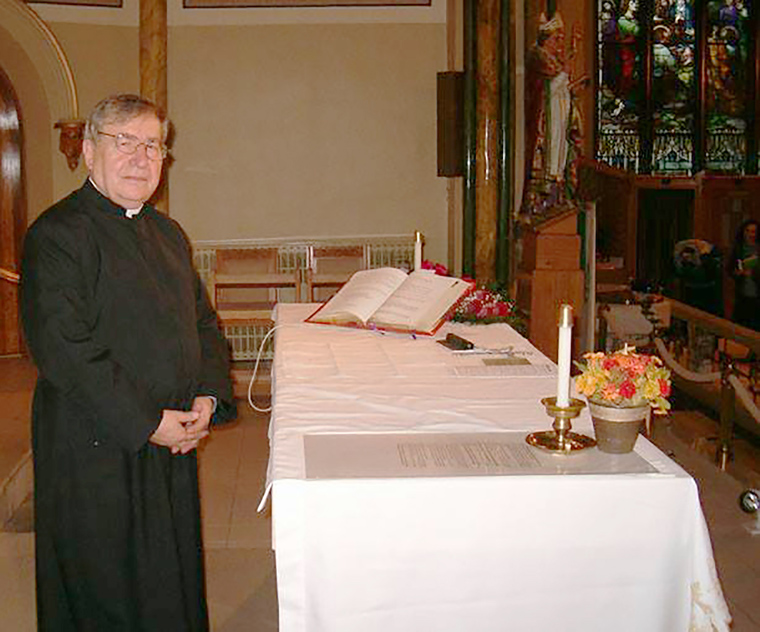 Many Masses in Utica are being offered in memory of Rev. Canon Richard J. Wilczynski, described as a gentle, multilingual, and brilliant priest who served Holy Trinity Church for a quarter-century.

“Very intellectual, very intelligent man,” said Rev. Canon John E. Mikalajunas, pastor of Holy Trinity. He added that Rev. Canon Wilczynski was “very gentle with the people here. They admired him. Many people have offered Masses now for his soul.”

Rev. Canon Wilczynski, 89, died Nov. 7, 2020, after undergoing surgery for a head injury he suffered in a fall at the retired priests’ residence in Lublin, Poland. His Mass of Christian Burial was offered Nov. 11 at All Saints Church in Lublin, officiated by the Most Rev. Stanislaus Budzik, archbishop of Lublin.

“The archbishop related how thankful he was to Father Canon for his work in retirement to the archdiocese,” Rev. Canon Mikalajunas reported. “He celebrated Mass in various parishes in the city of Lublin helping his brother priests and translating Latin documents for the archdiocese.”

He enjoyed sharpshooting with a pistol, “and he enjoyed a lovely meal,” Rev. Canon Mikalajunas said.

Affectionately known as Father Richard, Rev. Canon Wilczynski served as the Parochial Vicar at Holy Trinity with Father Leo Prozny from 1982 to 1992 and with Father Arthur Hapanowicz from 1992 to 2007.

“Father Prozny [who died in 2001] took him in with the blessing of the diocese,” said Rev. Canon Mikalajunas, adding that Father Richard received a pension from the Diocese of Syracuse “for which he was very grateful.”

Rev. Canon Wilczynski retired in 2007. He returned to Poland, where he had friends, and lived at the special residence for retired priests in Lublin. Rev. Canon Mikalajunas visited him there July 29 to Aug. 6, 2015, during which time the Archbishop named Father Mikalajunas an honorary canon, with the blessing of Bishop Robert J. Cunningham.

“Father Wilczynski was a dedicated multilingual priest who served the community of Holy Trinity Parish in Utica for many years. Always willing to help, Father provided stability and holiness to the parish during changing times.”

“I thought he was a wonderful priest,” said Joseph Bednarczyk, a former Holy Trinity Parish Council member and a parishioner there for his 87 years. “I mean he dedicated himself to God.”

Bednarczyk for several years had a rosary program on a radio station called WBVM (Blessed Virgin Mary). He says the Chaplet of Divine Mercy at 3 o’clock every day, and he participates in Eucharistic Adoration one hour every week at St. Joseph–St. Patrick Church in Utica. One time while he was leading the rosary procession that proceeded along Genesee Street in Utica, his daughter, six or seven at the time, grew tired, so he carried her to the Holy Trinity auditorium.

Joseph and his late wife, Maureen, had five children, including James and John who served as altar boys at Holy Trinity. Joseph remembers asking Maureen: “Would you mind if I stay after church and do a little work?”

For about 20 years, he volunteered to clear snow and cut grass. One day as he was shoveling, Rev. Canon Wilczynski took a picture of him. For a caption Joseph may have expected something like “great work, nice job.” Instead, Father wrote: “Joseph doing laborious work.”

It still makes Joseph chuckle: “Kick out of that. I still got it someplace. ‘Joseph doing laborious work.’”

Many people in the parish remember Rev. Canon Wilczynski “with deep fondness,” Rev. Canon Mikalajunas said, “and many of them, including some now in their teens, were baptized by Father Richard. He made a great impact here. He really did. And he learned the English language, and he did it well.”