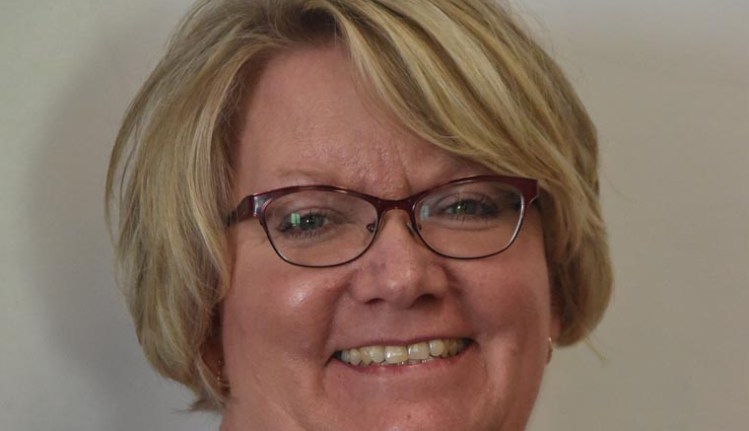 Nancy Wilson earned a master of science degree at SUNY Cortland, and she also completed the administrative program at the University of Rochester’s Warner School of Education. “I think being a good teacher and a learned person is important,” she says. -SUN PHOTO | KATHERINE LONG

The Wilsons have an impeccable background at diocesan schools in Rome.

Nancy attended grades nine through 12 at the former Rome Catholic High School on Cypress Street. That became Rome Catholic School, pre-K through 12, which  her daughter and son attended at the same time as Nancy worked there as an educator.

Now, in what she called a natural progression, the self-described “fun person” and “happy person” has moved up to the principal’s role at Rome Catholic, which is now in the former St. Peter’s School building on Floyd Avenue.

“I always had faith that it was the right place for my children,” Nancy said of the school, and she enjoyed watching her kids grow up in front of her rather than someplace else.

Wilson replaces Patricia Bliss, who left in June to pursue other things. “Nancy brings an attitude, creativity, and enthusiasm that is welcome to the Rome Catholic community,” said William Crist, superintendent of Syracuse Catholic schools. “She has been working as the interim principal during the summer and we are pleased to introduce her as the Catholic educational leader in Rome.”

Wilson comes from a “pretty much 50-50 military family,” including her father; early in life she attended schools all over the country (“you learn to adapt pretty quickly”): first grade in Kansas, second and third and perhaps part of fourth in North Carolina, fifth and sixth in a public military school in New Jersey, seventh and eighth at a Catholic school in New Jersey, and then to Rome for high school.

Her 20 years as an educator for the diocese have included stints at the former Transfiguration and St. Peter’s schools. She also taught in Oregon and Arizona. It was in Arizona that her husband was killed in an accident.

“You learn very quickly you have control of very little,” she said, “and what you do have control of you do with a happy heart. When things come along, I deal with them as pleasantly as I can. You may be the only happy person that someone meets that day; it doesn’t cost anything to be nice.”

Pleasantness helps when a pupil comes to school in the morning after a pet has died, or even after the breakfast corn flakes have run out.

“If you can relate to them about that and help them,” Wilson said, “then they will be able to move on that day, and that day will not be lost.”

She added: “I believe learning’s about relationships. … If you don’t love them, the children that you teach, you’re not teaching them anything.”

Her daughter, Maggie, entered Rome Catholic as a four-year-old, and she went on to play the role of Anna in Anna and the King; she also participated in mock trial, modified sports, and a dance group. Maggie now is finishing a master of fine arts degree at the University of Massachusetts Amherst. She is mostly a printmaker, and she will pursue a Ph.D. in art history and perhaps become a professor.

Nancy’s son, Sandy, entered Rome Catholic as a three-year-old and went on to play the title character in the school’s production of Oliver! Sandy is now a helicopter crew chief at Nellis Air Force Base in Nevada.

The kids at Rome Catholic use lots of tech, the principal said. She hopes to put a programmable robot into the hands of every pupil this year. Guiding those projects will be Sandy Engle, whom Wilson described as a gifted tech teacher.

Wilson also anticipates holding family nights with literacy activities, board games, and social time. “All that is good learning time,” she said.

Throughout her career, Wilson has baked for opening faculty meetings and other seasonal events. “I think baked goods make everybody happy, you know?” she said with a laugh. She has already sent “Monster Cookies,” with peanut butter, M&M’s and chocolate chips, to her son for his birthday. But because baking partner Maggie is in Massachusetts, Nancy will be baking pies alone for the first time in 10 years.

But, again, she chooses to be happy. “I’ve always loved school and going to school,” she said.