Service or serve us?

Talk offers view of vocation of laity in society 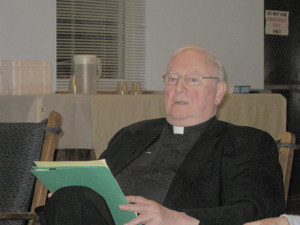 But the talk at Syracuse University’s Alibrandi Center focused on precisely these two topics, and the small group who gathered to hear retired Bishop Thomas Costello and Maxwell School Professor Margaret Thompson speak couldn’t have been more receptive.

Bishop Costello and Thompson appeared as part of the Msgr. Charles Borgognoni series at the Alibrandi Center.

Bishop Costello began the talk by listing the familiar foundations and principles of the U.S., such as justice for all, refuge for immigrants and the importance of the family.

But these ideas are increasingly coming under attack.

“These are challenges in public life, and our thesis tonight is that the church has something to say about these issues,” Bishop Costello said.

He argued that the church has a right, even an obligation, to participate in public debate.    “The question is: how does the church participate?” he said. “I’d like to suggest that that depends on how you define the church.”

Bishop Costello said that when he first became involved in the church, there was a much more hierarchical relationship between lay people and pastors.

“For parishioners, their role was to pay and to pray, and the clergy, they just took care of the rest,” Bishop Costello said.

But that system was easier to put in place when there were more vocations.

Bishop Costello said there were 20 other priests in his graduating class, but to get that same number for the Syracuse Diocese now, one would have to include all the priests who have been ordained since 1995.

That hierarchical model was changed with Vatican II, particularly with the evolution in ways of considering the significance of baptism.

“Baptism incorporates us into Christ, into the Church,” Bishop Costello said. “Vatican II said it’s not the clergy’s business, it’s the people’s business. And baptism makes everyone a part of that mystery.”

He said he would like to see an increasing emphasis on solidarity and efforts to solve problems at the local level.

“You have a role as lay people to make our values known and present. There are some places in this world where only your voice is the way of getting that done,” he said. “The role of the church in politics: the clergy’s it is to enunciate the principles, the values; the laity’s it is to take those values into the world and witness them, to make them known.”

Bishop Costello stressed the importance of casting votes which are based on one’s moral principles.

But, he said, the church must not tell people how to cast those votes.

“The church does not tell people for whom to vote or for whom not to vote. That’s a principle.” It is a principle, he said, which is occasionally and unfortunately violated.

“There’s probably never a perfect candidate. They all have their flaws,” Bishop Costello said.

He said that if a candidate puts forward a policy that goes against Catholic teaching, one should not vote for that candidate if the vote is meant to favor that policy.

“It’s not an easy process to decide for whom to vote based on our moral position,” he said. “Society’s just a whole lot more complex that just one single political issue.”

Thompson’s talk followed Bishop Costello’s, and she built on a number of issues he raised.

As examples to reflect upon, Thompson read the Beatitudes to those gathered and offered her own examples of people who she said she felt embodied the principles in each.

Her examples ranged from Dorothy Day to former President Jimmy Carter who, she said, may not have been a great president, “but I think he may have been our best ex-president in terms of devoting his life to peace-making around the world.”

“As Catholics, we’re taught that there are seven sacraments. But I think that’s wrong,” Thompson said. “I think there are eight sacraments. The eighth sacrament is service.”