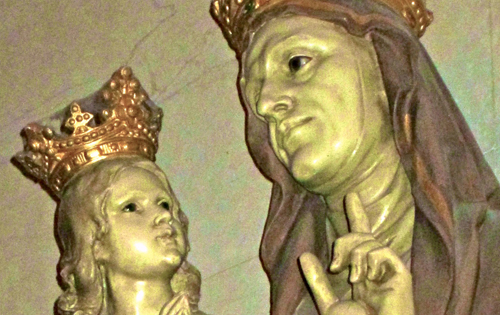 Several churches in the Diocese of Syracuse are offering triduums that will honor St. Anne in late July.

A triduum is a three-day observance. St. Anne is venerated by the Church as the mother of the Blessed Virgin Mary.

The triduum traditions at some parishes have roots from long ago. St. Vincent de Paul Church in Syracuse, for example, has celebrated this devotion to St. Anne for 121 years.

Here is a look at the triduum schedules for several churches in the Diocese of Syracuse:

The Triduum to St. Anne at St. Vincent’s dates to the 19th century.

Parishioner Chris Vaughn, who is in charge of the triduum, said Father Alfred E. Nortz told her about the diary of the first pastor of St. Vincent’s, Father William F. Dougherty, and she took notes.

“Legend has it,” Vaughn said, “that Father Dougherty requested an intention from St. Anne and she answered his prayers. He thanked her by promoting devotion to her which St. Vincent de Paul Parish still has today! Father [John F.] Rose has continued this tradition.”

Father Dougherty also conducted pilgrimages to Sainte-Anne-de-Beaupré Shrine in Canada for many years, she said.

Asked how long the triduum tradition will continue at St. Vincent’s, Vaughn said, “I don’t know. But as long as I’m here, as long as the pastor that’s here encourages it, we will have it. Father Rose has been very encouraging, and it’s a good thing.”

She said she has benefited from the triduums herself.

“I feel that it’s good for the parish,” Vaughn said of the triduum. “It’s good for people to participate in it. It’s good for them to know their faith. They know the Blessed Mother, but they don’t know her mother as well. Her mother is St. Anne.”

The observance starts with a 7 p.m. Mass each night in the air-conditioned church.

On July 24, Father Kenneth Kirkman will officiate at Mass. Father Kirkman serves as the parochial vicar of St. Mary’s Parish in Cortland together with the merged parish worship site at St. Anthony of Padua.

On the 25th, Father Thomas R. Servatius, pastor of St. Augustine Church in Baldwinsville, will officiate. The July 25 observance at St. Vincent’s will include a healing service.

The third day of the St. Vincent’s Triduum, the 26th, is St. Anne’s Feast Day. Deacon Michael Colabufo will preside over the blessing of the children at noon. If it’s a nice day, the blessing will be in the prayer garden.

That night at 7, there will be an outdoor procession with recitation of the rosary, weather permitting. Presiding at Mass will be Father Joseph J. Clemente, administrator of Our Lady of Peace in Syracuse and St. Cecilia in Solvay.

Church of the Holy Trinity,

said in an email that the traditional nine-day Novena to St. Anne was celebrated by St. Anne’s Church in excess of 70 years.

The tradition is continued by the Church of the Holy Trinity (a formation of St. Anne’s, St. Stanislaus Kostka Church, and St. Joseph’s Church, all of Binghamton, in 2003).

The nine-day event concluded on July 26, the Feast Day of St. Anne. The devotion was originally presented twice a day, once in Slovak and once in English. In 2012, the novena was shortened to a triduum, still concluding on the feast day with a reception following the evening Mass.

Hill said the church estimates that 150-175 people from the parish family and the community at large attend the triduum to gather in prayer, Eucharistic adoration, and celebration of the Eucharistic feast.

She said the attendees cite their devotion to St. Anne and family tradition as some of the reasons to attend the triduum. Many attendees also comment that the intercessory prayers to St. Anne, St. Joseph, and the Blessed Virgin Mary have eased their worries and left them in a more peaceful frame of mind.

A daily reflection on the Gospel readings of the day will be offered by Sister Brigid O’Mahoney of the Missionaries of the Heart of Jesus.

“Sister Brigid is a dynamic speaker who among other ministries, conducts Bible studies at various locations in the Southern Tier,” Hill said.

Church of the Holy Trinity is air-conditioned and accessible to people with disabilities, Hill said. Call (607) 797-1856 for more information.

The triduum will be a revival of sorts, said Patricia Barnett, director of faith formation and RCIA coordinator for both St. Joseph and St. Stephen the King. She has been there almost eight years and there has not been one in that time, she said.

The triduum is being revived, Barnett said, because the church’s St. Anne Society asked her to start it up again.

Each day the services will begin at 12:30 p.m. They will probably last no longer than an hour in the air-conditioned church, she said.

Barnett will lead the people in prayers, and there will also be a short reflection and a focus of the day. She might open up the session for a discussion on the second and third days, she said. Each day, the attendees will pause for reflections or intentions.

“You don’t have to be Catholic; it’s open to everybody,” Barnett said of the triduum. “Just come and listen. Come and see, as our Lord likes to say.”