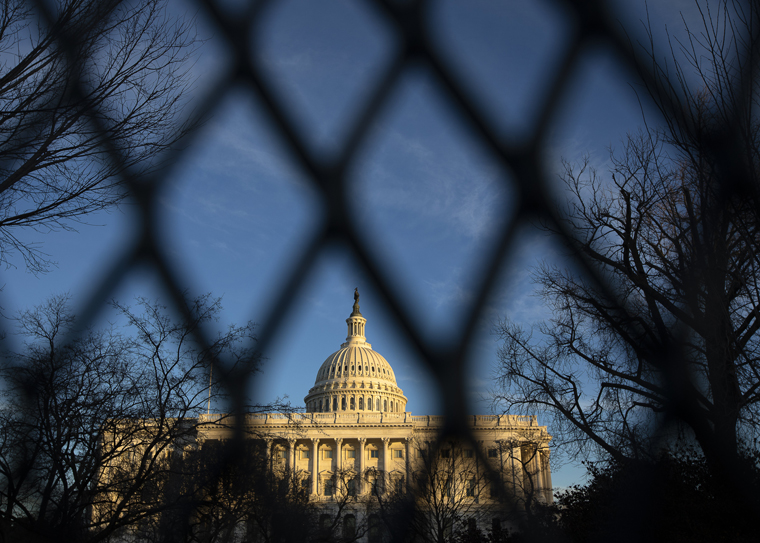 About two hours after pro-Donald Trump rioters overtook the U.S. Capitol in a thwarted attempt to overturn the results of the 2020 presidential election, the Sisters of St. Francis of the Neumann Communities posted the Prayer of St. Francis on their Facebook page. “Dear God, help us to heal as a nation,” the Franciscans wrote in a 4:18 p.m. Jan. 6 post that included the opening of their namesake’s famous prayer: “Lord, make me an instrument of your peace.”

Bishop Douglas J. Lucia echoed St. Francis of Assisi’s words that evening during a holy hour for the nation, livestreamed from Syracuse’s Cathedral of the Immaculate Conception. He called for peace and healing as the world reacted to a shocking, violent rampage that interrupted the count of electoral votes to certify Joseph Biden as U.S. president.

“I’m sure right now many of us would want to yell and scream and say a few choice words about what happened today,” Bishop Lucia said in a service that included Scripture readings, a rosary for justice and peace, a litany of peace, and a homily. “But what’s more important is that we once again remember the Word become flesh and his message, and be reminded that you and I are called to be God’s messengers here and now. That is what’s going to make the true difference in our world.” (Read Bishop Lucia’s homily in full on page 3 of this issue.)

The storming of the Capitol — unmatched since the British burned down the building in 1814 during the War of 1812 — threatened the lives of the vice president and top Congressional and Senate leaders; left at least five people dead; and caused anger and grief at the desecration of the symbol of the country’s democratic principles. By Jan. 11, dozens of rioters had been arrested on federal charges, the Democrat-led U.S. Congress had presented an article of impeachment charging Trump with “incitement of insurrection” for his incendiary remarks and false claims of election fraud, and the FBI was bracing for further violence in Washington and state capitals ahead of Biden’s Jan. 20 inauguration.

The bishop further condemned the violence in a Jan. 7 statement. “This mob scene was no mere act of civil disobedience for which fellow citizens have been jailed,” he wrote. “It was an outright attempt to subvert the democratic process on which this nation is built, and those who participated in it through their actions or instigating words need to be held accountable.”

He commended those who restored public safety amid the dangerous attack as well as members of Congress working together, and underscored the sacredness of all human life.

“Incoming President Biden said yesterday, ‘Enough is enough is enough!’ I couldn’t agree more!” Bishop Lucia said. “It is time for this nation to return to being ‘One Nation Under God.’” (Read the bishop’s statement in full on page 3 of this issue.)

A Le Moyne College statement linked the attack on the Capitol to rhetoric from the Trump administration, and condemned “the actions of the mob and the words of the president.”

“The mob of insurrectionists that stormed the Capitol shocked us all,” college leaders said in a Jan. 7 statement. “And yet, their brazen refusal to accept the outcomes of a free and fair election, and their assault on the workings of democracy, are an extension of an administration that has consistently used ugly words and carried out equally ugly deeds. The coming change in presidential leadership will not purge our nation of the hate and ignorance that has been unleashed during the past four years.”

The statement was signed by Linda LeMura, college president; Jesuit Father Joseph Marina, provost and vice president for academic affairs; and the presidents of the faculty senate and the Student Government Association.

“Our hearts ached as we watched these despicable actions that threaten not only to destroy the seat of our government but to rend the bonds that unite us,” the Leadership Conference of Women Religious (LCWR) said in a Jan. 7 statement.

The Sisters of St. Francis of the Neumann Communities — a community of about 300 women worldwide ministering in Syracuse since 1860 — on Jan. 7 posted a link to that statement. The LCWR represents about 80% of leaders of Catholic sisters throughout the U.S.

“In our increasingly divided nation, we renew our commitment to the common good and pledge to take up the challenge to use our energy to repair our democracy and contribute to the work of building a more perfect union,” the LCWR statement reads. “We invite all people of good will to join us and we call on our elected leaders to point the way.”

Archbishop José H. Gomez of Los Angeles, president of the U.S. Conference of Catholic Bishops, also condemned the violence and blasted the attack on democracy.

“The peaceful transition of power is one of the hallmarks of this great nation,” he said in a statement.

Cardinal Wilton Gregory of the Washington Archdiocese described the U.S. Capitol as “sacred ground” that welcomes diverse opinions. “We should feel violated when the legacy of freedom enshrined in that building is disrespected and desecrated,” he said in a statement.

Although Archbishop Gregory did not single out any person or political party, he called for a change in “the divisive tone that has recently so dominated our national conversations.” He added: “Those who resort to inflammatory rhetoric must accept some responsibility for inciting the increasing violence in our nation.”

“Violence is always self-destructive. Nothing is gained by violence and so much is lost,” the pope said after reciting the Angelus prayer Jan. 10.

The pope urged government leaders “and the entire population to maintain a high sense of responsibility in order to soothe tempers, promote national reconciliation and protect the democratic values rooted in American society.”