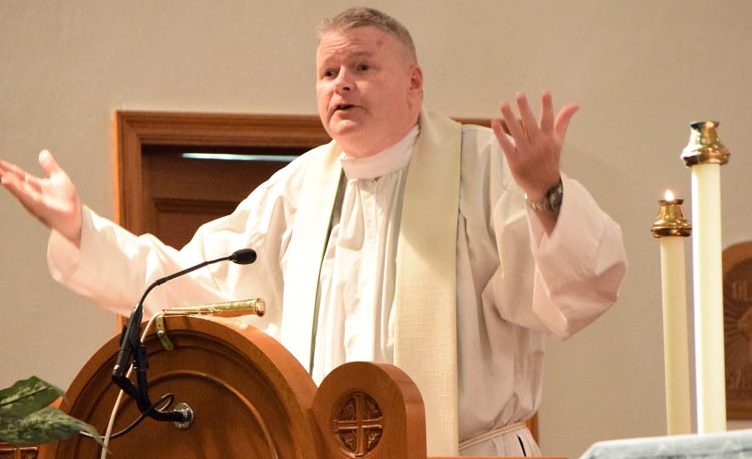 Hundreds urged to take love into the world

A Ministry Appreciation Day was held Sept. 30 at St. Paul’s. On Sunday Oct. 1, there was a concert at St. Mary of the Assumption. For the final three nights, the event at St. Francis of Assisi brought out more than 300 people for each session.

Father Ken Beale, a retired Air Force chaplain and priest of the Newark (New Jersey) Archdiocese, used gifts as a musician with piano, guitar, and voice during the presentations.

On Monday evening, the focus was “Faith” specifically related to baptism. Tuesday was “Hope” with a reconciliation service. Wednesday concluded with Mass centered on the “Love” from the Eucharist.

“It’s been a wonderful response of the folks. It’s a wonderful parish … St. Paul’s, St. Francis, St. Mary’s clustering together to pull together this mission. It’s great to just have that base when you come into a place,” said Father Beale prior to the concluding night.

Because of such tragedies, he said, “people are reminded as to the importance of faith and wanting to gather at a moment like this.”

“Our goal is to ignite that fire of faith and continue to let it burn as time goes on,” said Father Beale.

The focus on Faith, Hope, and Love is important, he said.

“It’s wonderful as well because we’re celebrating the feast of St. Francis celebrating this last Mass at St. Francis,” he said. “The greatest of these is love. And we know that the Eucharist is an expression of God’s tremendous love.”

During the closing Mass, some of the hymns focused on St. Francis as the mission concluded on his feast day. But Father Beale also highlighted the patrons of the other two parishes, St. Paul and the Blessed Mother.

“There have been people who reminded us of what it means to be a person of love.  Truly one who understood what it is that our God wants us to do,” he said.

Father Beale spoke of the love of St. Paul’s letters to the various communities.

“He encouraged … admonished.  He wanted to instruct them.”

And of St. Francis, Father Beale said: “He literally started to rebuild that church until he realized what ‘that church’ he was supposed to build was about.”

“We are here in the image and likeness of God. Each time we pray to that point of concentrating. May we be able to concentrate on that bread and wine,” Father Beale said.

He expressed hope that those present would continue to feel the faith “continue to burn day to day … next week and next month.

“Reignite the fire,” he said.  “That’s my prayer. That’s my hope, that we recognize a God who loves us.”

Deacon Tom Picciano is a journalist and longtime contributor to the Catholic Sun. He serves at St. Vincent de Paul Blessed Sacrament Parish in Vestal.