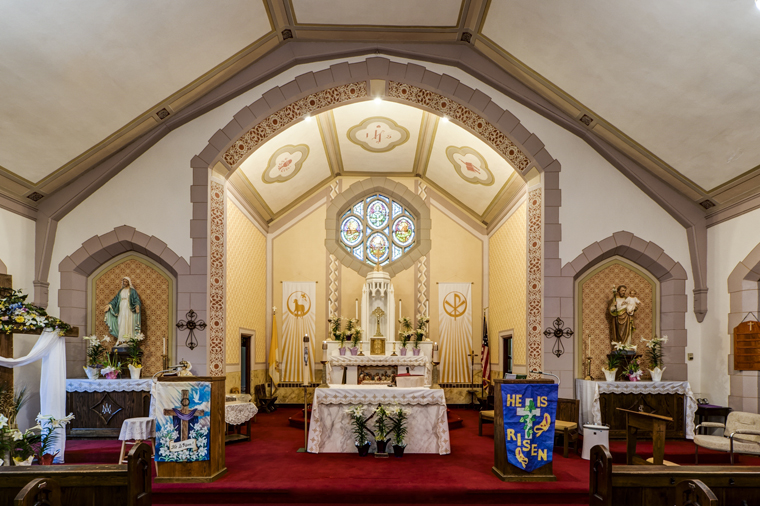 In 1870, before the Syracuse Diocese was formed and shortly after the Civil War, the Catholics of the bustling little village of Oriskany Falls came together with the intent to form a parish. A few years later, a beautiful church with a splendid steeple was completed on Broad Street and the first Mass was celebrated at St. Joseph’s in 1873. It was said that during Mass the gentle sound of the waterfalls could be heard — a pleasant atmosphere in which to worship God.

Several years earlier in 1862, the first Mass in Oriskany Falls was celebrated in a family home by the pastor of St. Mary’s in Clinton, Father Edward Bayard. Between then and 1872, Masses were held in the Village Hall every third Sunday of the month. Even without a church, the faith of the people was strong and the offering of the Holy Sacrifice of the Mass and receiving of the Holy Eucharist did not depend on a physical edifice.

Once the church was built in 1873, St. Joseph’s was a mission of St. Bernard’s in Waterville. In 1883 the first pastor, Father Simon Cannane, was appointed by the bishop of Albany. Father Cannane purchased a home for a rectory on Main Street in Oriskany Falls and served the parish for over 30 years through 1913. During that time the Syracuse Diocese was formed in 1886.

In 1913 Father Henry Hyland was appointed pastor. Land was purchased and a cemetery was established in 1916.

Fifty years after the original church became a reality and four priests later, the new St. Joseph’s Church standing today was built just a couple of doors from the rectory, in 1923. The parish was helped in this endeavor with a donation of $40,000, which was 10  times greater than the total cost of $4,000 for the original church.

During this time the church in Vernon Center, St. Agnes, was a mission church of St. Joseph’s. This relationship continued until the mid-1960s. Parishioners would transport the priests back and forth for Masses.

As the years progressed, improvements were continually being made on the church and rectory, but from 1955 through 1959, with the guidance of Father Willard Doherty, side altars were added with statues of the Blessed Mother and St. Joseph. In Father Frederick Cummings’ time at St. Joseph’s many improvements were made at the cemetery and it was greatly beautified.

Father Adolph Kantor served the parish from 1962 to 1964. Although pastor for a very short time, he was greatly loved by all in the village as well as the parish for his friendly and outgoing personality and his beautiful singing voice. He was the last pastor to celebrate the Mass in the Latin Rite. It was he who had the chimes installed and who initiated a summer school of religion for both children and adults.

In light of the Second Vatican Council, Father Matthew Luczycki (serving 1964-1969) emphasized and renewed education efforts through the Confraternity of Christian Doctrine, holding classes on Saturday mornings and Sunday evenings, and he even formed a Catholic Youth Organization (CYO) to assist in faith development. In addition, property adjacent to the church was purchased and a School of Religion built and then dedicated in January 1967.

Father Moritz Fuchs came to St. Joseph’s in 1970 and guided the parish through many of the changes that emerged from Vatican II, including the new and different kind of music ushered in with the ’70s; lines for Communion rather than altar rail; increased roles for the laity in the liturgies; more personal involvement in social concerns; and the renewal of the Parish Board into a working Parish Council. St. Joseph’s celebrated its centennial in 1970 with a beautiful Mass of Thanksgiving and banquet.

Father Fuchs was followed in 1978 by Father Robert Dwyer and then Father Walter Florczyk. Over the next 14 years, the social programs that had started earlier and the parish youth group flourished.

Father Vincent Kelly came to St. Joseph’s in 1992. He faithfully served the parish for 28 years right up until his death in 2021. He was greatly loved and appreciated in his steadfast support of the parishioners.

St. Joseph’s is now one of four churches comprising the newly formed Eastern Pastoral Care Area (PCA) or Route 20 Catholic, with Father Jason Hage at the helm. The future looks bright as parishioners from all four parishes join together to form a thriving new community, united through the Word and the Holy Eucharist.

Bishop Lucia will join Father Hage and St. Joseph’s parishioners for a Mass of Thanksgiving at 6 p.m. on Saturday, July 10. A chicken barbeque will follow. All are welcome.

Our thanks to Stella Cieslak and Father Kelly, now both deceased, for helping to preserve our parish history.

Barbara J. McNamara grew up in Oriskany Falls with St. Joseph’s as her hometown parish.