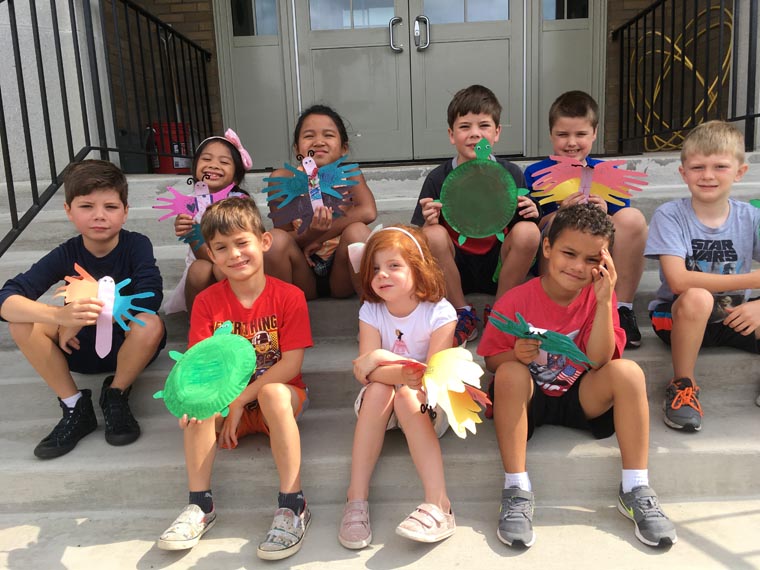 JOHNSON CITY — Ever seen an Ozobot in action? Picture a plastic mini-robot about the size of half an eggshell. Put it on a piece of paper with a printed black strip embedded with color and it reads the path. It’s able to make turns, spin around, and go in different directions all by itself.

That’s just one popular highlight for students at the Summer Super Saints Camp during the last two weeks of July at St. James School.

“They’re super saints because they came to camp this summer to take on the challenge of doing a little bit more than lazing around for the summer,” said coordinator Beth Kreeger.

The dozen or so young people who took part alternated between three areas: sports and games, art, and STEM (Science Technology Engineering and Math).

Adults might have a hard time understanding tech-speak that goes along with STEM, and the camp featured some different names for old games. Ever heard of Breakout EDU?

“That is a series of challenges, puzzles. Working together to solve each one of them leads them to a new clue and they solve the puzzle and it leads into another,” Kreeger said. “The ultimate goal is to get the key to unlock a box or get the code to unlock a lock and open up the box. The kids like that.”

It may look like a treasure hunt to older people. Young people eagerly search out clues in the form of words or math problems. When the group figures it out, they quickly head to another classroom to find a message — while the teacher reminds them not to run.

“I love being an educator right now. There are so many cool things that you can do, we have Chromebooks [laptop computers] at the school here,” Kreeger said. “We’ve given them a little more experience with Ozobot Blockly.”

Ozobot Blockly, by the way, is computer coding that allows the mini-robots move around the paper.

“It’s exciting. These kids…They’re digital natives. They use all this technology and we need to incorporate that into their lives because they’re the ones who are going to be using on a regular basis,” added Kreeger.

They also seemed to have a great time just playing outside on a sunny day when St. James’ new pastor, Father Charles Opondo-Owora, stopped by for a visit. The playground is just a few steps away from the parish garden where they helped pick a variety of produce including squash, cucumbers, and lettuce.

The garden became a lesson to help those in need. They’d previously toured the parish food pantry, just across Main Street from the school.

“We’re taking care of our community. It’s an extension of what we do during the school year,” Kreeger said. “We know they have a shortage in the summer. [In] so many families their kids aren’t getting lunches or breakfasts at school. So they rely heavily on the food pantry. So we knew we had to go ahead and stock it up for the summer.”

The Summer Super Saints learned much in two weeks. It’s possible some of the areas of focus could lead to clubs during the school year. One aspect included in the camp that’s an integral part of the school was prayer at the beginning of the day and before meals.

“We provided our students with a safe, fun summer growing experience in a faith-based environment.”