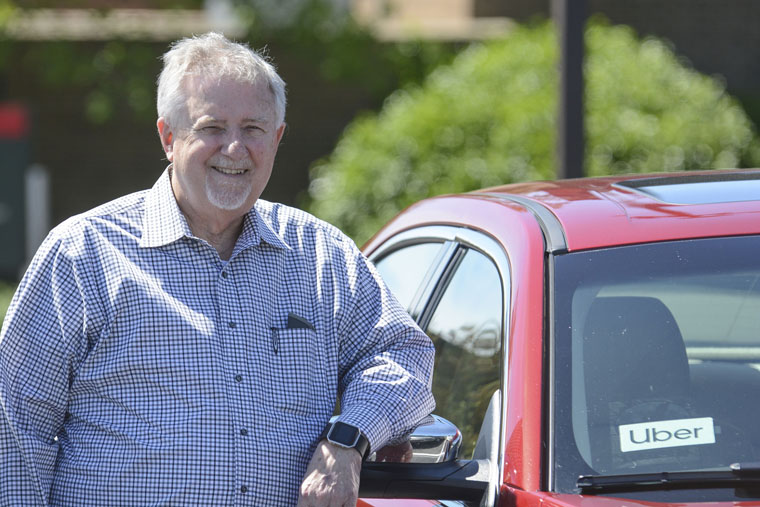 NASHVILLE, Tenn. (CNS) — Vice president of human resources, real estate agent and hospital chaplain are all part of Deacon Paul Brancheau’s resume. But his current job as a ride-hailing driver has arguably garnered the most attention from his fellow deacons and parishioners at St. Philip Church in Franklin where he serves.

Although his current job may seem like a large departure from his other work, Deacon Brancheau believes God arranged his previous employment history as a way of preparing him to be a ride-hailing driver.

“I attribute everything to him. I look back on my career and see I made mistakes. But, now I see how it all came together and all part of the purpose and plan he had,” Deacon Brancheau said. “I’ve had people get in my car concerned about their jobs and I discussed with them their options and helped them make plans. I’ve had people get in my car, not knowing their religious affiliation, but knowing they needed me to just tell them to just pray.”

That ended up being the advice he gave one customer.

“I picked up this guy … from Chicago. He’d never been married, never had a close girlfriend. And he was in town for something and he met this girl and he started telling me, ‘I’ve never felt like this before. It’s only been four days, and I can’t believe it,'” Deacon Brancheau said.

“But, she had all of the sudden been hospitalized. And he didn’t know what to do. … Then I just asked him if he knew how to pray. He said, ‘No,’ he had never prayed. And I said, ‘Well, you know how to talk to people, right?’ He said yes. Then I said, ‘Well then, talk to God. Tell him what’s on your mind,'” he said.

The deacon said the rider was “looking for advice so I went on and told him that since he felt so much for this girl … he should keep in touch with her and let her know that he was praying for her,” Deacon Brancheau said. “I finished up and he said, ‘I don’t know how this happened, but it was meant to be.'”

While this Uber driver turned life coach most often deals with people looking for a listening ear or advice, there are times where Deacon Brancheau has even given fallen-away Catholics directives they’d rather not hear.

He said when one passenger mentioned he was Catholic, “I took that as my chance to tell him that I was a deacon in the Catholic Church. He quickly clarified that he wasn’t a good, practicing Catholic. So, we got to talking. … We talked about church and things like that. And as he got out of the car, I pointed at him and said, ‘Get back to church.'”

The deacon has also ended up chauffeuring a large number of bachelorette parties around the city and giving some marriage advice along the way based on his 49 years of marriage.

He advises riders to take time to get to know the person they are marrying, make God a part of the marriage and never go to bed angry.

The driver credits the volume of faith-based interactions he has had to his willingness to allow the Holy Spirit to arrange his appointments and guide the words he shares.

“You’ve got to learn that all you’re doing is dropping a seed, and that’s all you can do. That’s all evangelization is, planting a seed.”

Sometimes those seeds even come by way of his silence.

“I know when to keep my mouth shut,” he said. “If someone gets in my car and doesn’t want to say anything, that’s fine. I often times just listen. Sometimes that’s all of the ministry that someone needs.”