‘This is what we do’: Catholic Charities committed to serve during pandemic 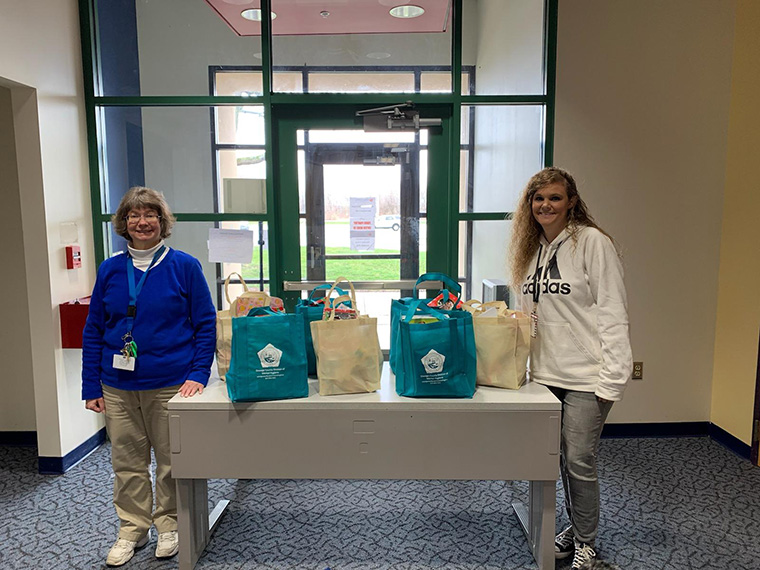 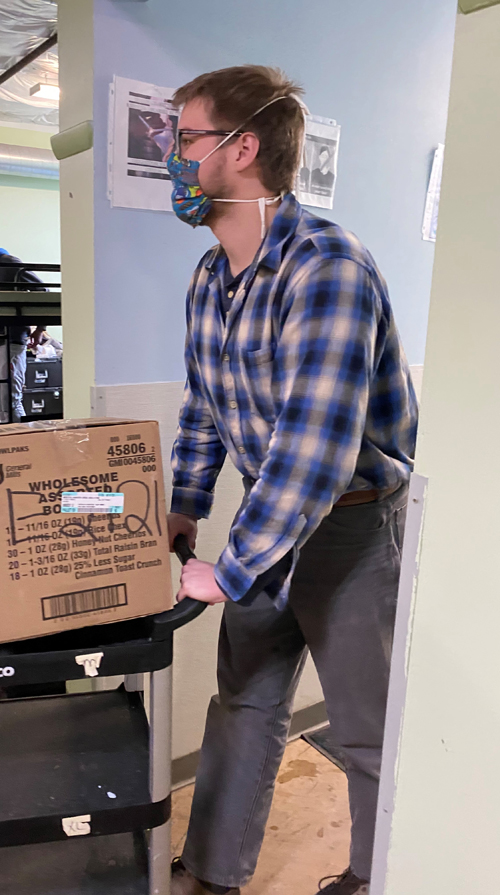 Chenango County Catholic Charities Director Robin Cotter called her staff together March 17 to discuss how the coronavirus pandemic would affect their agency, which serves a rural community southeast of Syracuse. “We wanted to be ready for what was coming,” she said.

Staff in the Syracuse Diocese’s six Catholic Charities regions were making similar plans as the public health crisis exploded, halting activities across the globe and raising questions about how health care and human services organizations would serve people.

At least 1,722 confirmed cases of COVID-19 had been reported in the diocese’s seven counties by April 27, according to the New York State Department of Health. At least 54 people have died of COVID-19 across the region; the largest number of deaths, 26, occurred in Onondaga County.

As the crisis continues, Catholic Charities staffs work to meet the unique needs of their communities. Following is a county-by-county look at how they are ministering during the pandemic. 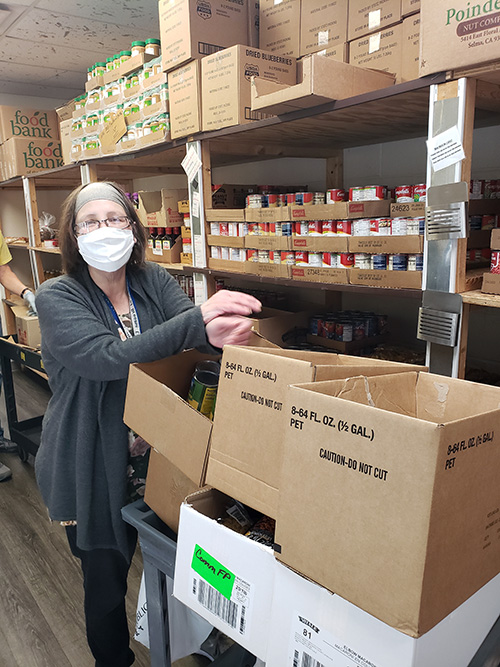 In the early days of the crisis, Catholic Charities of Broome County did not have enough personal protective equipment (PPE) for staff working with residential clients. The programs serve youth and adults with chronic medical conditions, behavioral health conditions, or intellectual/developmental disabilities. Some residents are medically fragile.

Accardi’s staff has suspended its Four Seasons Club and is providing telephone support for people with mental illness.

Its drop-in pantry now prepares boxes of healthful food for clients to pick up outside or to deliver. “We’re coordinating across the county with other feeding programs to maximize opportunities,” Accardi said. “We’re getting donations from local farmers who can’t sell their milk.”

“We’re having lots of people turn to us that don’t usually use the pantry,” she said. “We’re anticipating a growing need as people continue to be unemployed.”

Catholic Charities colleagues in other regions made similar observations about increased food requests. Another shared experience among several regions: People have donated their federal COVID stimulus checks to Catholic Charities.

“I continue to be astounded by the generosity of people in our community,” Accardi said. “A lot of people who have never supported us before have donated.” 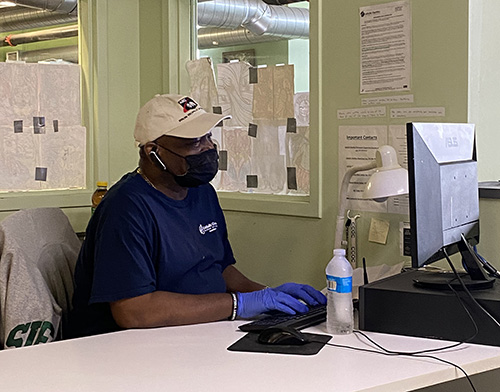 After a June 2006 flood ravaged the region, Catholic Charities of Chenango County and other community organizations created the Chenango Area Recovery Team (CART). As it became clear the region would not escape the pandemic, CART reconvened. “We anticipated we would need the same level of services,” Cotter said. “We got together to get us ahead and come up with a countywide plan.”

That approach is typical. “We work together with our partners,” Cotter said. “We have to because we’re rural.”

She and her staff held a daylong training so all staff could work in the agency’s residential programs. “We identified that as a strong need,” she said. “Our fear was one of our residents or staff would get sick.”

The agency’s Roots and Wings food pantry is handing out food packages. They’re also delivering food packages and have partnered with St. Paul’s Soup and Sandwich in Oxford to deliver warm meals.

The agency has doubled its food packages from three- to six-day supplies. “If you need the food, we bring you food,” she said. Clients “don’t have direct contact, but they know someone cares.”

Catholic Charities is also partnering with United Way and other agencies and using donations to provide emergency assistance for housing, utilities, and prescriptions.

Staff are using phone or video calls for interviews and counseling. They’re also starting a warm line so that people who need a friendly voice can talk with someone.

“On that very first Monday before social distancing, I sat the staff down and showed them the mission,” Cotter said. “This is the responsibility of our agency. This is what we do, and this is what we’re going to do.”

Marie Walsh had a lot of questions about how Catholic Charities of Cortland County would operate during the pandemic.  Topping the list: “How do we keep people in licensed residences fully staffed, 24/7?”

She also wondered: How do we deliver emergency services and keep everyone safe? How do we let staff manage their own situations? How do we manage services where you have 25-35 people walking in?

The staff is talking to clients by phone when possible. “It’s very minimal face-to-face contact right now, but a lot of phone calls,” Walsh said. “For some folks the anxiety and being cooped up has been tough on them.”

They’re delivering food and have collaborated with Cortland County and the Salvation Army to allow furloughed drivers to deliver food every day — including to some very rural, isolated areas. The agency is now delivering masks, including a 1,000-piece donation from Cortland County.

“We really know the people we work with well,” Walsh said. “Helping them survive is the kind of work we do every day — responding to whatever comes your way.”

The crisis has highlighted poverty and hunger, she said. It also highlights the lack of internet access in rural communities. “We had people who didn’t have phones, so we got them phones and minutes,” she said, adding that limited internet increases isolation.

As for staff, “they’re coming in less,” Walsh said. “They’re very diligent about handwashing and masks.”

Staff communication is key. “We update each other frequently,” she said. “I keep saying it like a  broken record: ‘We will get through this, week by week, day by day, whatever we need. We’re not going to rush. We’re not going to take on unreasonable risks.’”

“We’re trying to keep our own staff safe. We’re essential,” said Director Denise Cavanaugh. “We’re kind of like a hospital. We house people 24/7 with mental health issues. We can’t not staff them.”

They have ordered cots in case they need to move residents. They also have reduced face-to-face services and changed schedules so people can rotate in and out of residential duty. “It’s challenging,” Cavanaugh said. “But I get more pushback to stay at work than to go home.”

She acknowledges that staff and clients share “a certain level” of anxiety. “We’re aware there are physical risks,” she said. “I’m equally concerned about the emotional risks of being isolated. Some of our folks (clients) probably don’t actually understand what’s going on. We see them as our families.”

The agency runs a food pantry in Rome and offers community assistance and counseling in Madison County. Cavanaugh expects a spike in food requests should schools stop supplying food.

“We think there is going to be a lag,” she said. When assistance and forbearance on rent and utilities run out, “people are going to still be unemployed.”

From the first days the Syracuse Diocese began implementing policies to prevent spreading the coronavirus, Onondaga County agency Executive Director Michael Melara worried about Catholic Charities’ 99-bed men’s shelter in Syracuse. As of April 27, “we are very blessed and fortunate” no guest or staff member has tested positive for COVID-19, he said. Two men in Syracuse Rescue Mission housing died of COVID-19 and several more tested positive, according to news reports.

Any guest who shows COVID symptoms is evaluated onsite and, if necessary, referred for testing, Melara said. A physician is at the shelter Monday through Friday. Guests being tested are quarantined off site.

If a guest tests positive, the Onondaga County Health Department would investigate to determine which staff and guests need to be quarantined. “We have a plan in place to then move the guests to a confidential location for up to eight hours while the shelter is deep cleaned,” Melara said. “Then we would reopen the shelter.”

Early in the pandemic, a group of guests called a meeting, Melara said. They worked with staff to develop an agenda, then brought about 30 guests together to talk about how to stay safe.

“It was a very productive meeting,” Melara said. “It challenges some of the assumptions people have about homeless people. They were attentive to what was going on. They ran their own meeting.”

In 1997, at least nine guests at the Oxford Street Inn, predecessor to the current shelter, tested positive for tuberculosis, and one man died. “One positive case led to multiple cases,” Melara said. “That obviously is our biggest fear.”

“The concern is always when a refugee isn’t feeling well they don’t always call their doctor,” he said. “They are more likely to contact their caseworker to find out what they need to do. They’re hardwired to come into the office.”

Much of the staff is working remotely. This week Melara launched Catholic Charities Connects, two weeks of daily presentations via Microsoft Teams. “We’re very intentional about making Catholic Charities feel like a small organization,” he said. “The core of our culture is this idea of connecting to the people we serve and connections to each other. This is a highly depersonalized work environment now. We want to maintain those connections.”

Catholic Charities of Oswego County Director Mary-Margaret Pekow and her staff serve rural communities with high poverty. “There are a lot of issues around transportation. People can’t get around,” she said. The county’s sole hospital is in Oswego. “If you live farther out, it could take an hour and a half to get there,” she said.

Oswego is the only diocesan Catholic Charities with no residential programs. Its programs include care management, mental health services, child and family services, and a food pantry.

About 12 of the 75-member staff work in the office these days. “The rest are doing phone checks and video checks from home,” she said. “We repurposed drivers who typically drive people to appointments to deliver food.”

From March 16 to April 22, the agency served 698 families — about double their typical amount.

The agency has also given out masks, baby products, and hygiene products. “We’ve seen a lot of people who have never had to ask for help,” she said.

One surprise was the need for cell phones. “We’ve given out more than 60,” she said. “People ran out of minutes on their phones and some kids have no internet. There’s some rural spots where there’s nothing. They typically would go into town once a week. Now they cannot even call because they’re not supposed to go out.”

This week, her staff is distributing family entertainment bags. They hope the arts and crafts, card games, and Rice Krispies Treats ingredients will keep kids’ attention while they’re out of school.

“The unknown is the difficult thing for people,” she said. “A larger outbreak here would scare them, but what’s scaring them is the economic.”

For now, Pekow and her staff are taking challenges one at a time. But she’s already thinking about lessons learned. “Even though we have decent collaboration, we can always do better,” she said. “Maybe there’s a better way to use our resources. Maybe there’s better ways we can work together across the borders.”

Catholic Charities by the numbers

• Broome County: 379 employees, 500 volunteers, and the agency works with 36 parishes