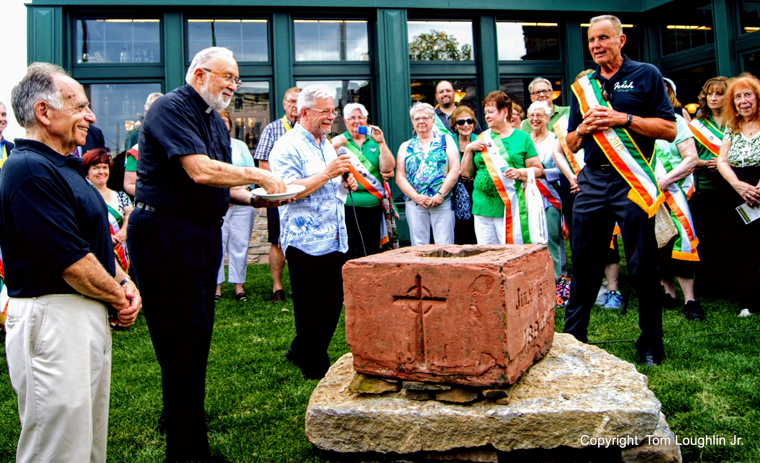 Father Richard Dellos of St. Joseph–St. Patrick Church in Utica and Father Joseph Salerno of Our Lady of Lourdes in Utica and Our Lady of the Rosary in New Hartford blessed and dedicated the center, with a procession, ribbon-cutting, and declarations by local and state officials.

During the blessing ceremony, the holy water vessel rested on the cornerstone that had been placed by Bishop Patrick A. Ludden at the old St. Patrick’s Church, which stood on the site from July 15, 1894, until it was razed in 1968.

The 21,211-square-foot facility, completed 13 years after the project start, includes an Irish history museum, an event center with a 300-person capacity, and nearest the corner of Columbia Street, the center’s aptly named “Five Points Pub.”

The ICC sits at a five-point intersection similar to the Five Points neighborhood in New York City to which the pub name gives a nod and a wink.

The bar, accoutrements, and furnishings were assembled and custom-fitted in Ireland, taken apart, shipped, and reassembled here.

Lang, developer of the Cultural Center project, said the facility and operations would soon be open to the general public and would not require a membership.