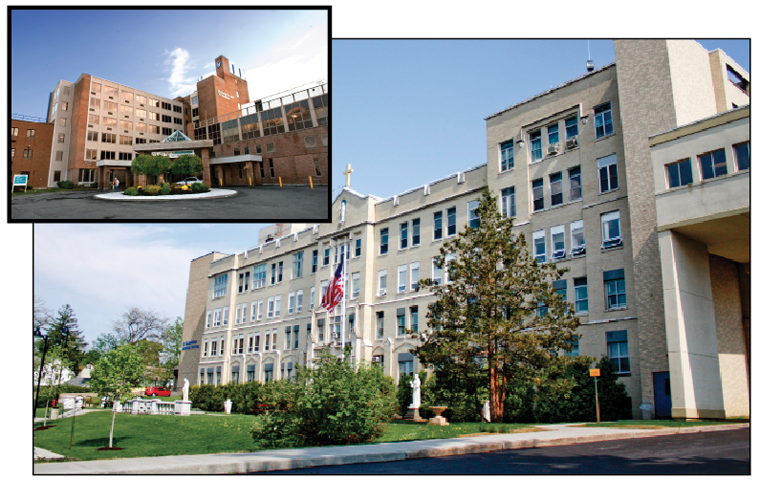 MVHS moving ahead with plans for new hospital

It’s a medical mystery — of the benign and welcome kind.

As of now, no one knows what the name of Utica’s new $480 million hospital will be. And although NBBJ, an international architectural firm that has produced many stunning designs, has begun to engage with MVHS and the community to test concepts for the new hospital, it is still in the very early stages of the design process, and there is no hint what the hospital’s exterior will look like. Groundbreaking is expected in early 2019.

In the alchemy of progress, St. Elizabeth Medical Center and Faxton-St. Luke’s Healthcare — which are already affiliated under the Mohawk Valley Health System (MVHS) — will further combine into one modern hospital. As one observer said, it’s a “new build” that will add efficiencies, boost acute-care services, help the economic development of Utica, and improve the well-being of the community. 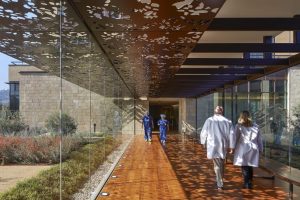 The Palo Alto Medical Foundation San Carlos Center is an example of design work done by NBBJ, the international architectural firm that is working on the MVHS project in Utica. – photo courtesy NBBJ

“Our approach will be to design a building that supports the mission and vision of MVHS, brings the staff from both of the current hospitals together into one cutting-edge facility, and is also appropriate for the development of the downtown location in Utica,” said Jonathan Wilch, a health-care principal based in NBBJ’s Columbus, Ohio, office. In order to create an understanding of what MVHS needs to provide for the region, and to develop planning concepts that support the most efficient delivery of health care, the NBBJ design team has been meeting with doctors, nurses, medical-support staff, and community members.

Wilch indicated that MVHS wants to make sure the hospital is highly flexible, highly efficient, and technologically advanced. The community members, he said, desire state-of-the art health care, provided locally, for the Mohawk Valley region. One concern voiced thus far is how the new hospital “will provide a positive impact on downtown Utica, and relate to its surroundings,” he said.

“The design team will continue to collaborate with MVHS and the community to develop the design of the new downtown hospital for the next year and a half,” Wilch said as he prepared to travel to Utica for more consultations.

Earlier this year, New York State awarded a $300 million Health Care Facility Transformation grant to the project, and a current effort to secure the additional $180 million from lending institutions is going well, said Robert Scholefield, chief operating officer for MVHS. Also, from a donor-support and philanthropy perspective,  fundraising will commence in the next few months, he said.

Asked for examples of how the new hospital will improve health care in Oneida County, Scholefield said patients will all have private rooms, which makes the environment more comfortable for patients and their families. It also reduces the possibility of transmitting infections, he said. 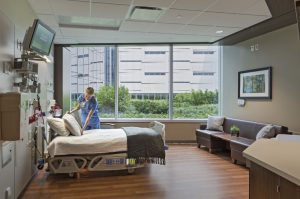 This room at the OhioHealth Riverside Methodist Hospital Neuroscience Center was designed by NBBJ, the same firm working on the MVHS project in Utica.

He noted that currently, physicians have to go back and forth between St. Elizabeth and Faxton-St. Luke’s to care for patients. Having services centered in one building will be an enticement for physicians and other health-care providers to join the staff, he said.

Scholefield and Wilch also gave these particulars on the project:

• It will have 390-400 beds and cover 750,000 square feet on 25 acres, with 3,000 parking spaces that will be shared with the downtown community. Private investment in the parking structure helped reduce the cost of the overall project.

• About 3,000 employees, physicians, and visitors will be on the campus daily. MVHS has about 4,700 employees but not all of them work on the hospital sites. Scholefield does not foresee an overall reduction in the number of employees.

• As many as 600 tradespeople or other construction workers could be involved in the project, and MVHS anticipates $17 million worth of expenditures by them in Oneida County while the project is going on.

• It will help revitalize a portion of Utica that can benefit tremendously from the new downtown hospital.

• It will generate development of the area surrounding the hospital, and it will connect some of the growing neighborhoods.

• MVHS will put together an electronic historical library of the current facilities so that the tradition is not forgotten. 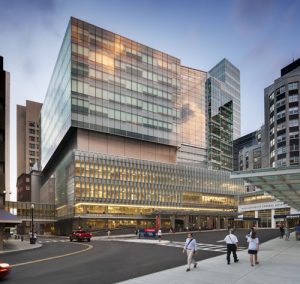 The Massachusetts General Medical Center Lunder Building was designed by NBBJ. The design of the new Utica hospital will be dictated by the needs in the community.

• More than 50 properties sit on the 25-acre site. It is not yet determined how many of the properties will be required for the development, but MVHS has been communicating with the property owners to discuss the purchase process. Once the overall financing is completed, MVHS anticipates providing property owners with purchase offers in the third quarter of this year.

• MVHS is planning the flow of patients through the facility. Once that is done, work will commence to design the departments themselves. Goals include submitting a Certificate of Need, a regulatory requirement, to the state Department of Health by the end of October.

• When Faxton-St. Luke’s and St. Elizabeth affiliated, it involved Bishop Robert J. Cunningham and the Sisters of St. Francis of the Neumann Communities. “We agreed to continue to maintain the Catholic perspective on abortion and that is built into our agreement,” Scholefield said. The values are still the same, he said, but MVHS is “acting on them and fulfilling them in a new location.” MVHS is an active parent governing model with a 19-member board of trustees that includes a representative of the Sisters of St. Francis.

Partners in Franciscan Ministries (PFM), which makes sure the goals of the Sisters are represented in their incorporated ministries, is a member of the board of St. Elizabeth Medical Center. Asked about the new hospital, Susan Crossett, president and CEO of PFM, said, “Our interest is that we were able to form a great partnership with Faxton-St. Luke’s and we’re very supportive they’re going to get a new hospital in the region. It’s a positive thing.”

“I think it’s a great idea,” added Thomas Dennison, chairman of the board for PFM and professor at Syracuse University’s Maxwell School of Citizenship and Public Affairs, where he teaches health policy. He noted that the Herkimer and Utica areas used to have six hospitals; now there are two; Syracuse used to have eight; now there are three.

The new Utica hospital, he said, will “help physicians and acute-care services in Oneida County for the future. The Sisters’ mission is service and this enables that service to continue.” He said the facilities will not be engaged in physician-assisted suicide or abortion.

The hospital facilities in Utica now are old, he noted, and the “new build” will offer state-of-the-art quality. The MVHS website says the project is estimated to take four to six years to complete.

Crossett summed up the benefits:

“How often do communities get brand-new hospitals?”