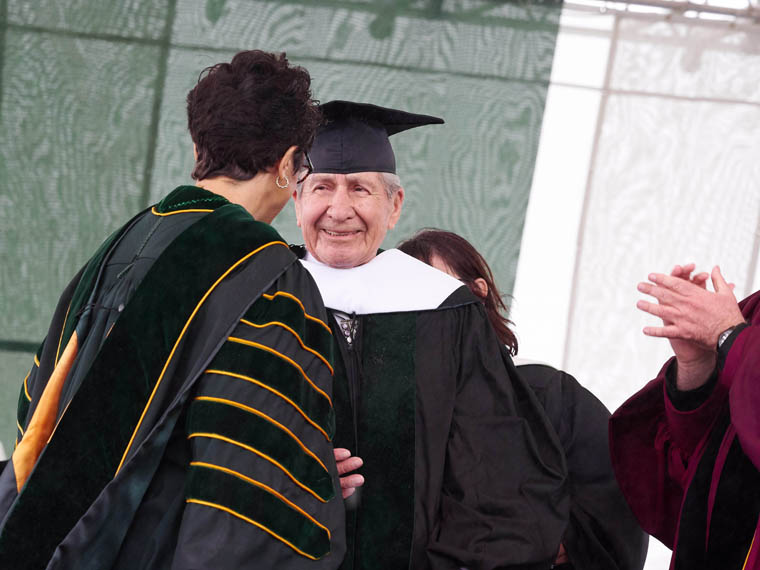 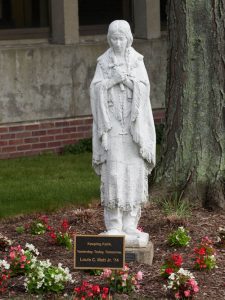 A statue of Kateri Tekakwitha, a Mohawk convert to Catholicism canonized in 2012 as the first Native American Catholic saint, stands on the Le Moyne College campus.

When Le Moyne College’s Holly A. Rine teaches Native American history, she sends her class on a scavenger hunt. As students explore campus, they see the statue of 17th century Jesuit Father Simon Le Moyne above the door of Grewen Hall. Nearby, they’ll find a statue of Kateri Tekakwitha, a Mohawk convert to Catholicism canonized in 2012 as the first Native American Catholic saint. They’ll also see Dablon Hall, a dormitory named after another Jesuit missionary, and six student townhouses named after missionaries killed by Native Americans. The Catholic Church considers the latter martyrs who died in defense of their faith.

Le Moyne’s campus holds numerous references to the Jesuit missionaries from New France (Canada) who sought to convert the Haudenosaunee, or Iroquois, as they called them, to Catholicism. The college seal, for example, features five arrowheads representing the original five nations of the Haudenosaunee. Grewen Hall houses Simon’s Pub, and Le Moyne’s yearbook is the Black Robe, the Haudenosaunee nickname for the Jesuit missionaries. Even the college’s location on Salt Springs Road evokes Jesuit history: Simon Le Moyne is said to have “discovered” salt water at Onondaga Lake, a site central to Haudenosaunee history and spirituality.

Although the campus community passes those names and sites daily, their context as part of the complicated relationship between the Jesuits and the Onondaga Nation is “new to all students, no matter their level,” said Rine, who joined Le Moyne’s faculty in 2006. “If we’re going to use the name and have the arrow points in our seal and name things after Jesuit martyrs, we’re going to have to deal with this history. We do have a responsibility to teach this more. How, I’m not sure.”

The Jesuits who founded the college in 1946 intended to honor the Jesuits’ role in bringing Catholicism to the region. Simon Le Moyne (1604-1665) made his first of several visits to Iroquois territory in summer 1654. He made arrangements for a Jesuit mission near Onondaga Lake. Seven Jesuits lived at Sainte-Marie de Gannentaha from 1656 to 1658. They learned Mohawks planned to attack the mission and fled.

A broader understanding of the colonial era now raises questions about the long-term impact of the Jesuits’ initial contacts with indigenous peoples. Many Native Americans, allies and historians say that missionaries disrespected indigenous history and spirituality and squelched language and culture. They blame Europeans for bringing disease and for racism and greed that led to colonization, genocide, and destruction of the land.

“We didn’t need them to convert us,” Onondaga Nation faithkeeper Oren Lyons said in a May interview. “We knew who our creator was. … They’re responsible for ecocide and ethnocide. They came in and our nations were lost.”

Le Moyne College made its first public acknowledgement of the Jesuits’ role in harming the Onondaga people at its May 2018 commencement, when it presented Lyons with an honorary degree that cited his “clear and respected voice for the Haudenosaunee and for indigenous people around the world.” Lyons, 88, accepted the award on behalf of all  Haudenosaunee people. 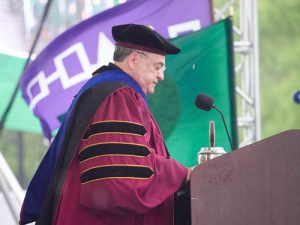 The Haudenosaune flag flew on the Le Moyne campus for the first time at the college’s May 2018 commencement. It is seen here, alongside Le Moyne’s flag, behind Jesuit Father Joseph Marina, provost and vice president for academic affairs.

At commencement, the purple and white Haudenosaune flag flew alongside Le Moyne’s flag, which includes the college seal, complete with arrowheads. For the first time, a college official stated, “We honor the Onondaga Nation, the indigenous people on whose land Le Moyne College stands.”

Le Moyne is planning a symposium for academic year 2018-19 on the relationship between the Jesuits and the Onondaga Nation. The symposium, and a senior seminar Rine is developing, will also address the Doctrine of Discovery, a concept that emerged from 15th-century papal decrees and condoned the conquest of the Americas and other lands inhabited by indigenous peoples.

These issues highlight that “for Native Americans, the past is very present in day-to-day cultural life,” Rine said. “The Onondaga have their point of view and the Jesuits have theirs. We have to talk about it.”

Historic context is crucial, she added. “Students are here at Le Moyne, but what does that mean? We are on Onondaga land, so someone occupied this land before. This is not something that happened, like the Cherokee Trail of Tears. It’s still happening. What is the part you play and how can you challenge this perspective?” 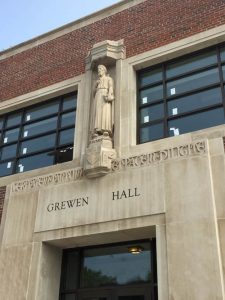 A statue of 17th century Jesuit Father Simon Le Moyne stands above the door of Grewen Hall on the Le Moyne College campus.

That includes discussing whether the college should change the names of buildings, events, or awards that invoke Jesuit missionaries, Rine said. That issue came up in 1990, when Le Moyne named six new student townhouses after the Jesuit martyrs John de Brebeuf, Noel Chabanel, Anthony Daniel, Charles Garnier, Isaac Jogues, and Gabriel Lalemont. They are six of the eight North American martyrs, canonized in 1930.

Students and faculty members objected to naming the buildings after the martyrs, noting that the move reinforced stereotypes of Native Americans as savages and missionaries as innocent victims. In response, the college canceled classes for a day and students were required to attend seminars on Iroquois history and culture.

When the college dedicated the townhouses that day, members of the college community planted a tree symbolizing peace and friendship between Jesuits and Iroquois. The late Mary MacDonald, former religious studies professor, suggested the tree of peace. Rine and college officials credit MacDonald with initiating discussions about indigenous cultures and Le Moyne’s relationship with the Iroquois.

In the early 2000s, Le Moyne removed from the entryway to Grewen Hall a mural some considered insensitive. “History in a Nutshell” by local artist G. Lee Trimm (1912-1976) was completed in August 1947 for Le Moyne. The mural depicts Simon Le Moyne and several Iroquois. Trimm painted Le Moyne much larger than the Iroquois, who appear subservient to the missionary.

Jesuit Father David McCallum, Le Moyne’s vice president for mission integration and development, said this year’s symposium will guide the college on next steps toward healing the relationship with the Haudenosaunee. Father McCallum, who has been meeting with Onondaga leaders for about two years, agrees that Le Moyne’s dialogue parallels Georgetown University’s Slavery, Memory, and Reconciliation project in some ways. Jesuits in 2016 apologized for the Jesuits in Maryland who sold 272 enslaved people to Louisiana plantation owners in 1838. The university also renamed two buildings that had been named for Jesuits involved in the sale.

But Father McCallum said the Georgetown case is more cut and dried: Those Jesuits were directly involved in slave-trading. “In the 17th century, when the Jesuit missionaries came from France, their intention was to share the Gospel with indigenous peoples, not to oppress or exploit them, but to ‘save their souls,’” he said.

“Catholics of those times thought this kind of selfless missionary work by the Jesuits was heroic,” Father McCallum added. “On the other hand, the Haudenosaunee experiences of Jesuits were mixed — mostly negative in the long run, as was the case with any Europeans directly or indirectly involved with the colonization of the ‘new world.’”

Companions on the journey

Jesuit Father Donald Kirby, rector of Le Moyne’s Jesuit community and a religious studies professor, said he and his brother Jesuits are open to the dialogue. Criticism about the harmful effects of Jesuit missionaries on the Haudenosaunee — intentional or not — is valid, he said.

Listening to others’ perspectives on such a nuanced issue fits into Le Moyne’s mission of intellectual rigor and social justice, he said. It also fits the mission the Jesuits articulated in the 2016 General Congregation — that Jesuits act as brothers in faith, justice, and reconciliation.

Father Kirby who has been at Le Moyne 42 years, isn’t ready to rename the college’s buildings, but he agrees the discussion is valuable. “We clearly don’t have all the answers,” he said. “The indigenous people in this area have so much to teach us.”

Renée K. Gadoua, a freelance writer and editor who lives in Manlius, graduated from Le Moyne College. Follow her on Twitter @ReneeKGadoua.