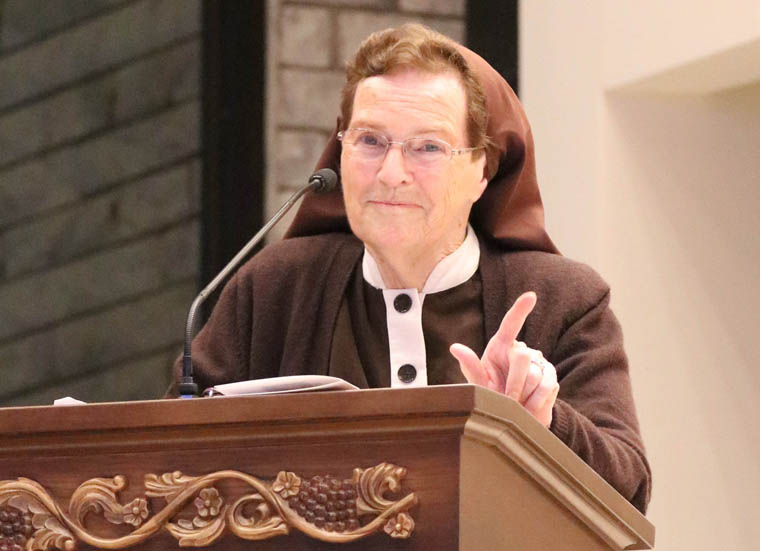 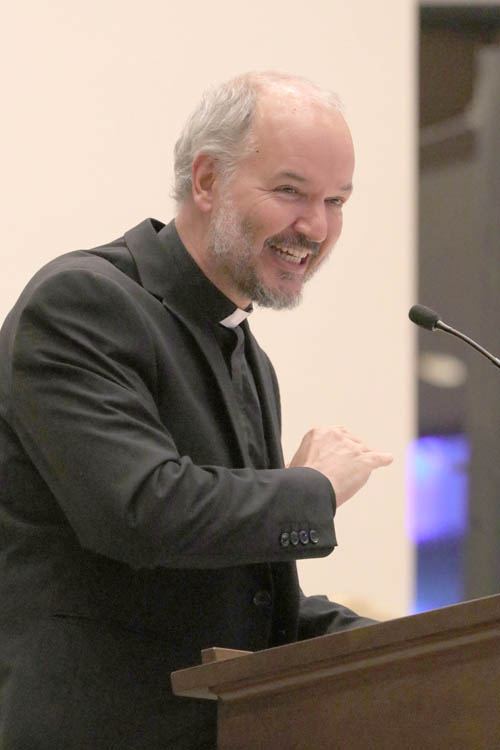 More than 150 sisters in Christ gathered at the Syracuse Catholic Women’s mini-conference Nov. 6 at St. Thomas Aquinas Church in Binghamton.

The morning began with the recitation of the rosary, followed by the Holy Sacrifice of the Mass celebrated by Bishop Douglas J. Lucia with concelebrants Father Thomas I. Ward and Father Pablo Escriva de Romani.

In his homily, Bishop Lucia encouraged those present to look at their lives as treasures to God and to ponder how we use and care for these treasures, keeping in mind that “our true treasure is a relationship with Christ.” He explained that St. Paul lived and ministered with friends within a larger family of believers whose names are immortalized in Scripture, and challenged the women to be like them, pointing others toward Christ and helping them to encounter him.

The featured speaker for the mini-conference, Sister Briege McKenna, captivated the women with the stories of her miraculous healing from rheumatoid arthritis 50 years ago, her gift of healing that she received shortly after, and her greatest gift, an hours-long spiritual revelation on the priesthood. She asked the women to pray for vocations to the priesthood, and to affirm and encourage priests. In her ministry to priests, Sister Briege teams with Father Pablo Escriva de Romani, who spoke briefly to the women. He told them that “the poorest of the poor are priests, because we have the biggest gifts and we don’t even know it.” He held up his hands, saying, “These are Christ’s hands.”

Drawing from her personal experiences, Sister Briege then outlined four stages on the path to discovering Jesus. First, make a decision to seek Jesus, and realize that he is a living person. Even though she entered the convent at 15, she only consciously sought the Lord years later, and when she did, her miraculous healing of both body and soul happened. “My seeking came to a beautiful resurrection.”

Sister told the attendees that the second stage is to look for him in the Blessed Sacrament, to receive him frequently in the Eucharist and to spend time in Adoration. She advised, “To find his peace and joy, come and sit with him.”

The third stage is getting to know the Lord as a person. During Adoration, she once had a vision of an “enclosure,” a space in which “to pray alone with Jesus and to listen to him.” She suggested praying the family rosary or praying in front of the Divine Mercy image. The final stage is loving Jesus by placing him first in your life. Sister Briege concluded with a prayer that every woman present would seek Jesus, find him, know him and love him.

The morning retreat ended with Adoration of the Blessed Sacrament, Benediction and Confession.

Nancy Huffaker is a member of the Diocese of Syracuse’s Commission on Women in Church and in Society.