Instrument will ring in a renaissance for diocesan music 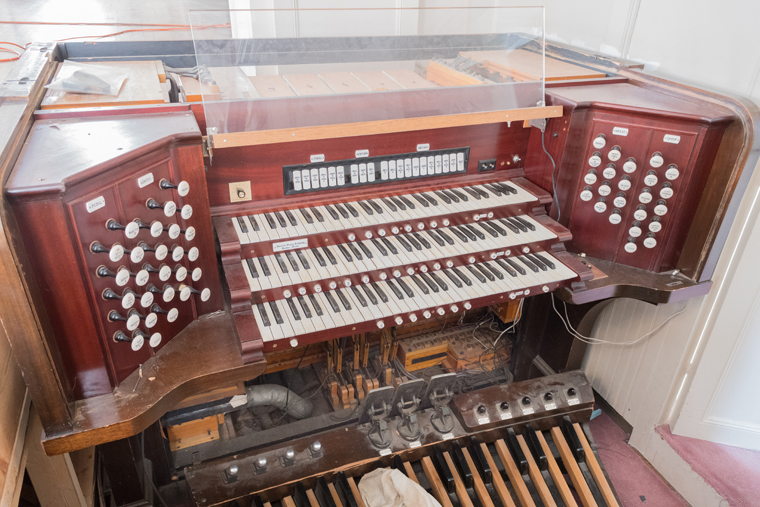 Only in a make-believe show, generally, can a pipe organ deliver its own encore.

“When you’re playing a full organ at a wedding or at the end of a grand celebration, the organ’ll die,” said Francis Schultz, director of music at the basilica. The air reservoirs collapse and make a sigh of doom — a grand expiration more than a grand celebration. “So it’ll just go, ‘E-h-h-h-h-h-h-h’ — make this horrific sound,” he said. It actually did that before a wedding, and Schultz had to switch to the piano.

Starting on April 9, the quirky old M.P. Moller instrument will be disassembled to make way for a gem of a pipe organ: 1927’s Ernest M. Skinner Opus 669. The Moller has 1,600 pipes; the donated Skinner, 2,431. It is, Schultz said, like going from an old-time Ford Galaxy to a Rolls-Royce. Gone will be the “incessant buzzing that drives me nuts,” he said.

“So right now the organ has its limits,” he said. “We can only use about half of the organ at one time today.”

GET READY FOR ‘MESSIAH’

When he started in 2015 as the permanent organist at the basilica, Schultz told Father Andrew Baranski, the basilica’s rector, that he wanted to make the basilica a “musical center of the diocese.”

That’s the point of the Skinner, which will be restored at a cost of about $470,000. A new organ would cost about $1 million. Installation of the Skinner will begin in late August, after a lot of work to make room for it, and end just before Easter 2019. “It’s a lot more than just a new organ,” Schultz said. “It’s a whole new music program that we hope to get going.”

Schultz would like the basilica to host a concert with three or four choirs from the diocese performing their favorite Christmas pieces. Also, Schultz belongs to the Syracuse Pops Chorus, and he said its music director, Lou Lemos, has told him he will bring a production to the basilica once the restored Skinner is installed. Schultz envisions a beefed-up number of singers for the Christmas portion of Handel’s Messiah. Schultz also has spoken with a representative of Syracuse University’s organ program about basilica programming.

A refurbishment that the Moller underwent in 1978 has worn off. A combination of dust and plaster has fallen into the pipes, “which is really making the organ have to work twice as hard as it should,” Schultz said. But thanks to the air conditioning and heating in the basilica, further damage was limited. Schultz still uses the Moller every week.

He gave a visitor a tour of the Moller, which is immensely complex. A wooden shed, or “box,” houses the pipes for the swell organ (upper manual or keyboard). The shed looks like a tree house, and it even has its own four-and-a-half-foot wooden ladder, along with a spinning wooden door latch and a wooden-block handle. The narrow wooden walkway inside rivals a ledge running around the deck of a ship. A long skinny spring operates the shed’s shades, which open and close to control volume. Old furnace ducting and PVC pipes help to supply air. Years ago someone accidentally stepped on a low horizontal PVC pipe, so now it is duct-taped and propped up with old booklets.

Schultz has known the Moller organ since he was an altar boy who lived a block and a half away from the basilica. He remembers the music director, the late Louis J. “Prof” Synakowski, letting him “climb into the box”: “‘Yeah, go ahead, just don’t fall on anything.’” Or the kids would ask “Prof”: “‘Can we go up in the steeple and see the bells?’

“So we opened up the top and there’s the big bell sitting there, it was impressive, and all of a sudden: ‘Bong!’” A ceremony had started, requiring the tolling of the bell. “We scattered down there … and you could see him at the organ just chuckling away,” the former gullible altar boy said.

Schultz figures the Moller is probably in the top 20 in Syracuse as far as size. More than 10,000 Mollers were built over the course of more than 100 years before the Hagerstown, Md., company went out of business, he said.

The Skinner that is coming ranks somewhere around No. 7 for size in the city, according to Schultz’s research. “Like I told Father Baranski,” Schultz said, “if we’re going to get something, let’s get something to put the basilica on the map musically.”

Schultz had looked around the United States and Europe for a replacement organ; nothing suitable or in the right price range. Then one day, Ed King, the facilities manager for the Syracuse Diocese, mentioned to basilica Trustee Phil Felice that he was just in a building that contained an organ: the former First Church of Christ, Scientist on East Genesee Street in Syracuse.

Schultz held talks with the building’s owner, a Long Island partnership called 728 EGSU LLC, which agreed with Schultz’s request to donate the organ.

Of the about 700 instruments that Mr. Skinner oversaw himself when the company was his, Dr. Poovey said, perhaps 100 of them have been taken care of or restored. He would like to visit and play the basilica’s Skinner after the installation.

Dr. Poovey said the Skinner is very effective for orchestral transcriptions and character pieces that evoke seasons of the year or particular emotions. An organist in 1927, he said, might have played music from a Wagner opera, like the prelude to the opera Tristan und Isolde; the overture to the opera Tannhauser; the largo from Dvorak’s From the New World symphony; Andantino by Edwin Lemare; and the famous Toccata in D minor by Bach.

The new organ, Dr. Poovey said, will be a wonderful addition to the basilica, the diocese, and the whole area. It “will really sing into the basilica beautifully,” he said. “So I think you all are very, very fortunate to have that instrument coming your way.”

Alan Lynch, the music director and organist for the Cathedral of the Immaculate Conception in Syracuse, played the Skinner before it was taken apart at First Church of Christ, Scientist.

Schultz recalls Lynch’s reaction: “‘You’re one lucky son of a gun. … That thing is phenomenal.’”

“This kind of organ can play most music in the organ literature,” Lynch said in an email, “although it particularly excels at accompanying or playing transcriptions of orchestral music.”

Sitting down to play it, he said, is a “connection to history and the thousands of people that enjoyed listening to it over the years. The first thing an organist does when he or she sits down at a new organ is to find the beauty. I went through each sound to find the voices and combinations of voices that really sing.”

Lynch works part time for Kerner & Merchant Pipe Organ Builders, the East Syracuse company that will restore and install Skinner Opus 669. He has spent two weeks working to regulate the pipes for proper speech, volume, and character. And he will spend many more weeks this summer and fall doing more of the same.

“This organ is unlike any other in Syracuse,” Lynch said. “Skinner organs are sought-after instruments which are uniquely American. Many organ builders of the 19th and 20th century were either influenced by or descendants of European organ builders. This organ is different because it doesn’t try to be Germanic or French in character; it’s an unabashed American Symphonic organ.”

A. Hawley Arnold, co-owner of Kerner & Merchant, said the Skinner’s character is warm and rich, not particularly brilliant and bright. He explained that some organs have pipes that are very, very small and very high-pitched. The majority of the Skinner’s pipes, he said, are bigger and lower-pitched sounding; there are some high-pitched pipes, but they are voiced mildly and not overbearing. Sometimes high-pitched organs can give a brilliant sound, he said, but “often they lack the gravitas that the Skinner has.”

The Skinner will work well on just about any music, he said, especially orchestral transcriptions and late-Romantic-era music. He expects fine performances of works by the likes of César Franck, Josef Rheinberger, Leo Sowerby, and Healey Willan, and he said Bach will work satisfactorily.

Arnold, who is an organist himself, figures the restored Skinner should be good for another 85 or 90 years.

“It’ll be a fine recital instrument,” he said. “And it actually should sound better in its new location than it did in the former location because the acoustics are better.”

As for the venerable Moller and its eccentric — if not eerie — habits, it’s available gratis, in whole or in parts. Anybody need a tree house?