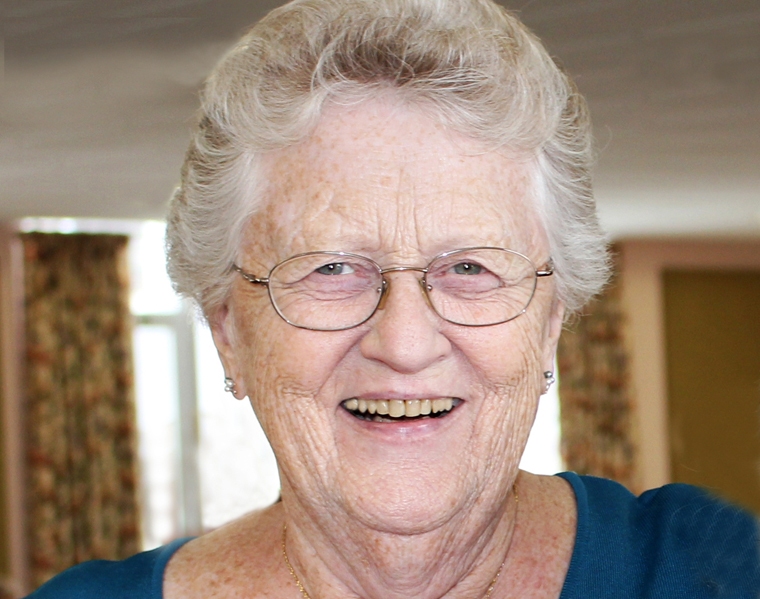 Sister Sara was born in Troy, N.Y., on September 17, 1934, daughter of the late J. Howard and Margaret Riely Cannon. After graduating from Catholic Central High School, Troy, she worked for a year at the New York State Department of Education in Albany. On March 19, 1954, Sister Sara entered the novitiate of the Sisters of St. Joseph; she professed final vows on August 15, 1961.

Sister Sara received a bachelor’s degree in Spanish from The College of Saint Rose and a master’s degree in Spanish from Middlebury College and pursued post-graduate studies at Andover Newton Theological School. In addition, Sister Sara completed the program at The Center of Alcohol and Substance Use Studies at Rutgers University to prepare for certification as a credentialed alcoholism and substance abuse counselor.

Sister Sara taught for 24 years in schools of the Albany and Syracuse dioceses and was an instructor in Spanish at The College of Saint Rose. In the Diocese of Syracuse, she taught at St. Anthony’s School, Syracuse; St. Aloysius Academy, Rome; and Bishop Grimes High School, Syracuse. After completing her certification in substance abuse counseling, Sister Sara served as a bilingual alcoholism counselor at St. Mary’s Healthcare, Amsterdam, and Leonard Hospital, Troy. She also served as a pastoral associate in St. Mary’s Parish in Little Falls; the Spanish Center in Amsterdam; Holy Cross Parish in Indiantown, Fla.; and St. Paul of the Cross Parish in North Palm Beach, Fla. For the last five years of Sister Sara’s active ministry, she volunteered at El Sol Neighborhood Resource Center in Jupiter, Fla., and St. Ann Place, West Palm Beach, Fla. In 2013, Sister Sara retired to St. Joseph’s Provincial House.

Sister Sara was a woman whose life centered on faith, family, friendship, and fun. Perhaps reflecting the legacy of her Irish ancestors, she possessed a keen wit that shone through adversity; an irrepressible love of laughter that gave perspective to her life; a vivacious, feisty spirit that drew people to her wherever she went; a genuine sense of self that resulted in her unique understanding and acceptance of human frailty in others; unusual adaptability skills that led her to an openness to a variety of ministries; and a passion for justice that directed her to be a voice for those who are least able to advocate for themselves. Sister Sara leaves a legacy of the beauty of a life lived in service to others, and she will be missed dearly.

Sister Sara is survived by her beloved sister, Sally Dorn, of Niskayuna; her sister-in-law, Beverly Cannon, of Wilmington, Del.; 17 nieces and nephews and their families; many friends across the country; and the Sisters of St. Joseph of Carondelet. In addition to her parents, Sister Sara was predeceased by her brothers: Jack, Joe, Father Bill, and Paul Cannon; by her sister, Joan O’Hearn; by her brothers-in-law, Bill O’Hearn and Roger Dorn; and by her sisters-in-law, Janet and Olga Cannon.

Due to the continued health concerns regarding the COVID-19 pandemic, there will be no public visitation or funeral services for Sister Sara at this time. A Memorial Mass will be scheduled at a later date.