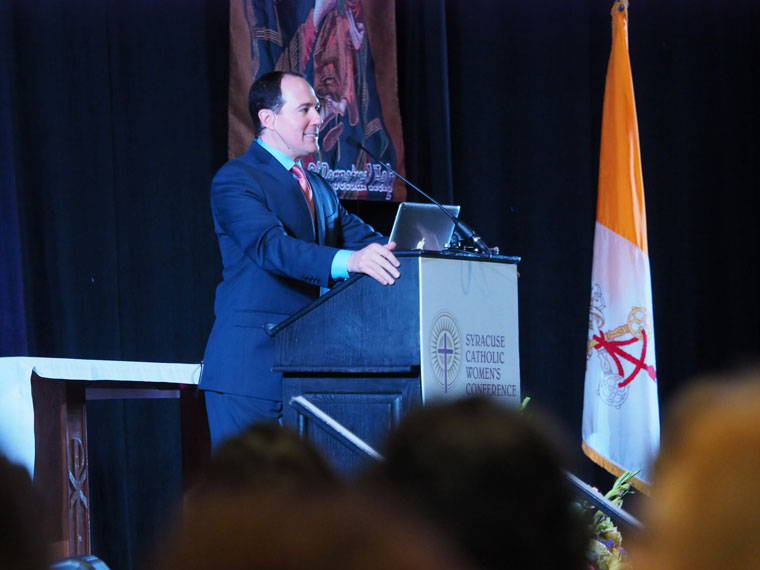 The 7th Annual Syracuse Catholic Women’s Conference on Oct. 29 touched the hearts of the nearly 900 women in attendance. As one noted, “Thank you for a very enriching day. I didn’t know how much I needed this day until I was here. God is good!”

Carla Coon, from the Southern Region, gracefully emceed the day, beginning by introducing the keynote speaker, Raymond Arroyo, the popular news director for EWTN and host of “The World Over Live,” a weekly news program that combines faith, reason, and culture. Arroyo has written five books about Mother Angelica including his latest, Mother Angelica Her Grand Silence.

Arroyo spoke movingly about Mother Angelica’s life and legacy: She was born in Canton, Ohio, a child of divorce, abandoned by her father, and left to live in poverty. She suffered stomach problems, swollen knees, shattered vertebrae, and debilitating asthma. Arroyo believes that the unfolding of her remarkable vocation was shaped by the physical and emotional suffering of her early life.  He described her complete dependence on God’s divine providence trusting that He would take care of everything.  Arroyo noted that Mother Angelica “knew how to offer up suffering to God better than anyone I know.”

The trust, love, and mutual respect shared by Arroyo and Mother Angelica ares obvious. He called her “Mama,” and his imitations of her charmed the audience. For him, his association with her, especially during her last years, counts as one of the greatest privileges of his life. She taught him many things, he said, but the most important is to live in the present moment. Mother’s mission was to pray for souls, to intercede for humanity, and to bring hope to those who had none. She was bold in order to accomplish God’s work — calling boldness “the Eleventh Commandment.”

Mother Angelica demanded Arroyo “Tell the full story; don’t sugarcoat my life. I wish you forty years in purgatory if you sugarcoat my life.”  She wanted everyone to know that holiness is possible for everyone, even an ordinary girl. She knew that pain can be instructive and suffering offered up to God can create astounding results. One day, according to Arroyo, she spotted him visiting the chapel four or five times. Calling him aside, she asked, “What are you doing?” “I’m praying,” he replied. “That’s my job,” she said, “yours is at the desk.” The audience laughed, recognizing the words spoken like a true mother.

Mother Assumpta Long, O.P., Prioress General of the Dominican Sisters of Mary, Mother of the Eucharist, from Ann Arbor, Mich., spoke on “Becoming like God: Virtue in Mercy.” Mother Assumpta compared Eve to Mary, Mother of the Divine Mercy. She explained that God wants to make all of us to be like Him, but we have to let Him do it His way.  He loves us so much that He sent His Mother to help us; there is no salvation for us without Jesus. We are so much in need of God’s mercy and the good news is He wants to give it to us. Since God has been merciful to us, we in turn need to be merciful to others. It takes great courage to instruct the ignorant or admonish the sinner, but we need the essentials we find in the Spiritual and Corporal Works of Mercy in order to help each other achieve the holiness God wants for us. Mother Assumpta invited us to adore, love, and receive Jesus into our hearts.

Before breaking for lunch, the attendants experienced a Healing Holy Hour of Mercy with Exposition of the Blessed Sacrament. Annet O’Mara, a member of the Diocesan Women’s Commision, led meditation and recitation of the Litany of Trust.  Throughout the day priests were available to hear confessions.

After a delicious lunch, Emily Wilson, a recording artist and author of I Choose the Sky, a scriptural reflection on Biblical women, spoke about Jesus’ encounter with the Woman at the Well. The woman represents all of us who are trying to satisfy the longing in our hearts that we have for God. The woman leaves her jar at the well because she has found the One who can fill her heart, and ours, with everything we need. Wilson sang a beautiful prayer of thanks to God for the beauty of womanhood and femininity.

The Conference concluded with Holy Mass with Bishop Robert J. Cunningham and music by the Holy Trinity Choir from Fulton.

The attendees enjoyed the many vendors who sold gifts, religious items, books, and music throughout the day.

Next year’s conference will take place on Saturday, Oct. 28, at the Oncenter.

Ellen Benton is Evangelization Coordinator at Utica’s St. Joseph & St. Patrick Church, and is a recent appointee to the Diocese of Syracuse Commission on Women in Church and in Society.