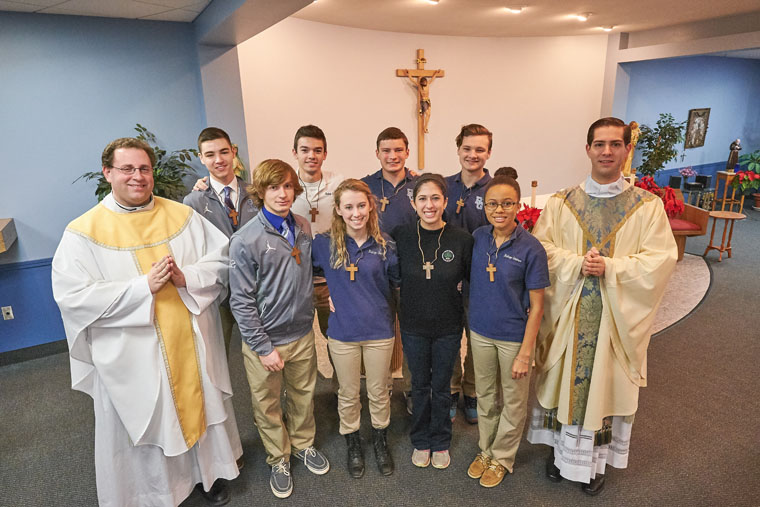 Mark’s Gospel for the day said Jesus “was amazed at their lack of faith” when he came back to his native Nazareth.

Two diocesan priests came back to Bishop Grimes Jr./Sr. High School Feb. 1 and found the exact opposite: an uplifting kind of faith.

Eight Grimes seniors were commissioned as Extraordinary Ministers of Holy Communion at a Mass attended by up to 500 people.

Father Christopher R. Seibt — a Grimes graduate — presided at the Mass with concelebrant Father Peter Tassini, Jr., who had instructed the new Eucharistic ministers in their formation.

“I have to say — as I have often said — that I am where I am today, a very happy priest, in large part because of the formation that I received here at Bishop Grimes,” Father Seibt said in his homily. He was addressing students, faculty, staff, and the special people who had been invited by the student body in observance of Catholic Schools Week — grandparents, aunts, uncles, and others.

Father Seibt called the eight ministers-to-be up to the altar set up in the gym. No one had talked them into this ministry; they had come up with the idea themselves. Around their necks were leather cords holding impressive wooden crosses. To the students’ left stood the Bishop Grimes Concert Choir.

As he commissioned the eight, Father Seibt said:

“Bless our brothers and sisters. May they faithfully give the bread of life to your people. Strengthened by this sacrament, may they come at last to the banquet of heaven. We ask this, through Christ our Lord.

Father Seibt then asked the five boys and three girls: “Are you resolved to administer the Holy Eucharist with the utmost care and reverence?”

The ministers received Communion first, and then they fanned out to distribute Communion to the crowd. There were some nerves mixed in with the strong sense of joy in the gym.

New Minister Alex Moran was wondering, What’s going to happen? Nothing to worry about, though — he was still smiling afterward.

“I was raised in a Catholic household … and it’s just grown onto me,” he said. “This is my life, this is who I am. And just doing this, I feel like [I’m] taking one step closer to God.”

Father Seibt had said that these eight ministers are called to live differently in the world. Part of Moran’s future service to humanity may include a different and interesting career: pastry chef. He said he bakes a sensational “Snickerdoodle” cookie.

His classmate Jonah Cummings smiled as he gave out Communion, a “great experience.” His assignment: the younger students. “You never feel better than when somebody’s smiling and greeting you,” Cummings said.

“I think the best piece of advice that I got when I was getting into this training to be an Extraordinary Minister … was to keep a positive attitude,” he said.

New Minister Zach Schell said the eight seniors decided to become ministers because “we can basically change the world” by bringing a sense of togetherness.

Asked for examples of how he can continue to be different and extraordinary, he cited daily prayer — including blessings before eating, nightly prayer, and saying the rosary with his family. The little things count too. “Just opening a door for someone and giving a smile,” he said, “saying good morning; anything just little can really impact someone’s day greatly.”

Minister Sara Hopkins noted that the people who received Communion from her “really liked it. I think that they thought it was really nice to see students at their school taking part in the Church and being ministers of Communion.”

Catholics are called to do more, she said, so she does a lot of volunteer work at St. Margaret’s School in Mattydale, where her mom, Amanda Hopkins, is the principal. Sara cleans up the school in the summer and helps get the textbooks ready. Also, she became a lector at St. Margaret Church last year.

To Lily Rogers, being a Eucharistic Minister means she has to honor Jesus and fully resemble him by caring for and serving others.

Her brother has autism, she said, so she helps the non-profit organization that her mother, Bobbi Rogers, set up: Families for Effective Autism Treatment of CNY. She likes to “help those kids and make them feel like they’re included, and make them have a good time and feel loved.”

For Lucas Burnette, being a new Eucharistic Minister is a continuation of some “awesome things. I’ve gotten to be a godfather of my baby cousin, and I’ve gotten to be confirmed with my uncle.” Of his faith in God, he said, “I feel that it brings me peace.”

Grimes senior Paul Cifonelli was commissioned with his classmates, although he has been distributing Communion in his parish, Blessed Sacrament, since he was confirmed.