A reflection on St. Joseph 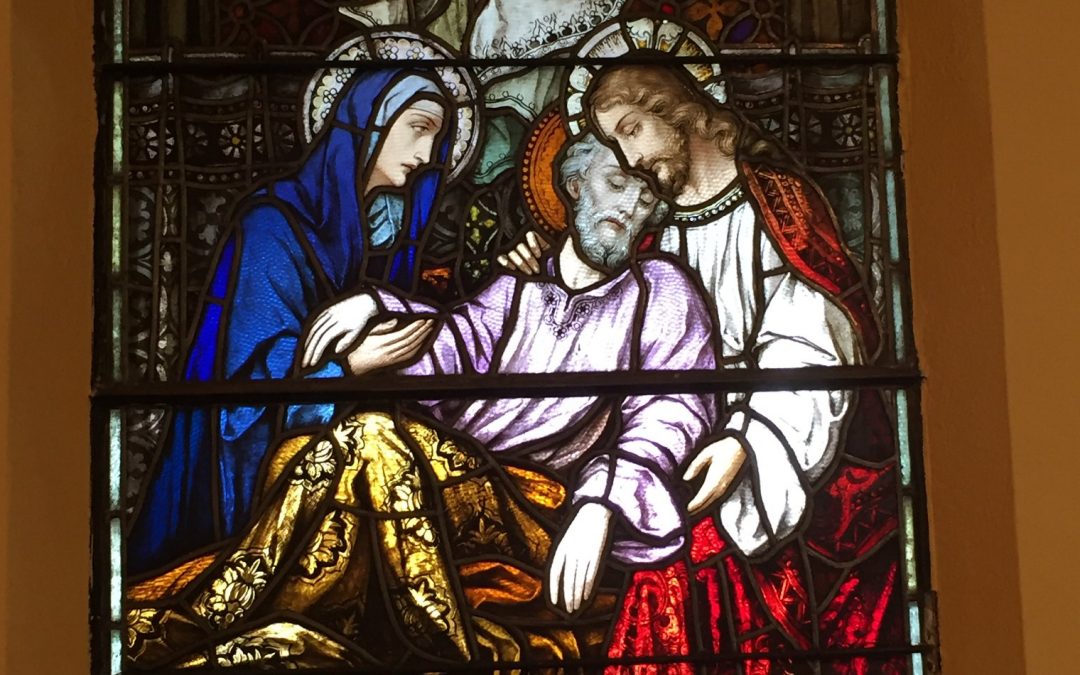 Editor’s note: In advance of today’s feast of St. Joseph, Father Ken Kirkman posted the following reflection on his Facebook page. Father Kirkman was generous enough to share his reflection with the Sun. It has been edited for length and clarity.

By Father Ken Kirkman | Special to the Catholic Sun

St. Joseph is the foster father of our Lord and the protector of the universal Church, and so is an important saint to celebrate. I wanted to share these photos of one of the windows from our chapel in the Parish Center. 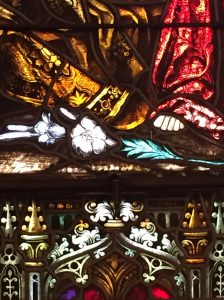 There is a grammar to sacred art. What that means is that when we learn some of the symbolic rules behind it, we can understand it on a deeper level, and not only appreciate it more, but also gain more from what it offers us. So this stained glass window portrays something you usually do not see: the death of St. Joseph. You’ll notice that this event is not mentioned in the Gospels, so we don’t have a canonical source which tells us this story. This has permitted the artist a certain amount of freedom, which he uses to great effect here. So the central figure is St. Joseph, an older man, between Mary and Jesus. Jesus here is an adult, which is helpful as we more easily recognize him by adult characteristics in art: in most Western Christian art, that means long hair, beard, and often dressed just as He is here, a white tunic and a red cloak. At Joseph’s feet is a lily; lilies have multiple different meanings in sacred art, often connoting purity and innocence, as they do for Mary. There are also a number of legends which build on that symbolism, including ones that hold that when Joseph first was betrothed to Mary, the staff he was carrying bloomed into lilies like this, indicating that he had been chosen by God to be wedded to Mary. At any rate, in many other images of St. Joseph, including statues, you’ll often see him holding lilies like these, and often holding a carpenter’s square, a symbol of his trade. 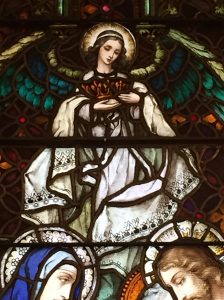 Above Joseph is an angel holding a crown. One of the qualities of great art is that it is often polysemous- it means or signifies different things simultaneously. We know Joseph is descended from the line of David, the King. Here, at the end of Joseph’s life, we are reminded of his origins in the great monarchical line of Israel, however much it had declined by Joseph’s day. At the same time, we are also reminded of the “crown of righteousness” which awaits the blessed in Heaven. The angel bearing that crown attests that Joseph has earned precisely that. With Joseph, the earthly line of David comes to a noble end; in Him who was known as Joseph’s son, however, the line of David endures eternally. 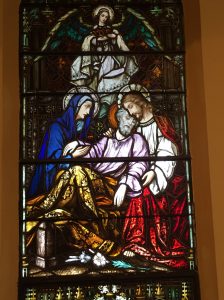 Finally, take a look at the positions of the central figures. They’re easily recognizable by their clothing, with Jesus as I have indicated above, and Mary dressed in blue and white as she so often is. You can see by his hands, held by Jesus and Mary, that Joseph has breathed his last, or is just about to. But with his head and body leaning against Jesus, notice how much the moment looks like the more famous Pietà, with Mary cradling the dead body of her son. (I’ve included the most famous one by Michelangelo, but also one by Giotto of the same subject which illustrates the point even better.) Jesus is performing the same duty of love for Joseph. And in that, the artist is making a huge Christological point: here, the Incarnate Word is participating to the full in the cycle of human sadness. He not only honored his earthly father but deeply loved him. Far from being unmoved, Jesus does not hold Himself back in the least from the pain we suffer. And that brings meaning and redemption in everything we suffer too.

Father Kirkman serves as parochial vicar of St. Mary and St. Anthony of Padua in Cortland.