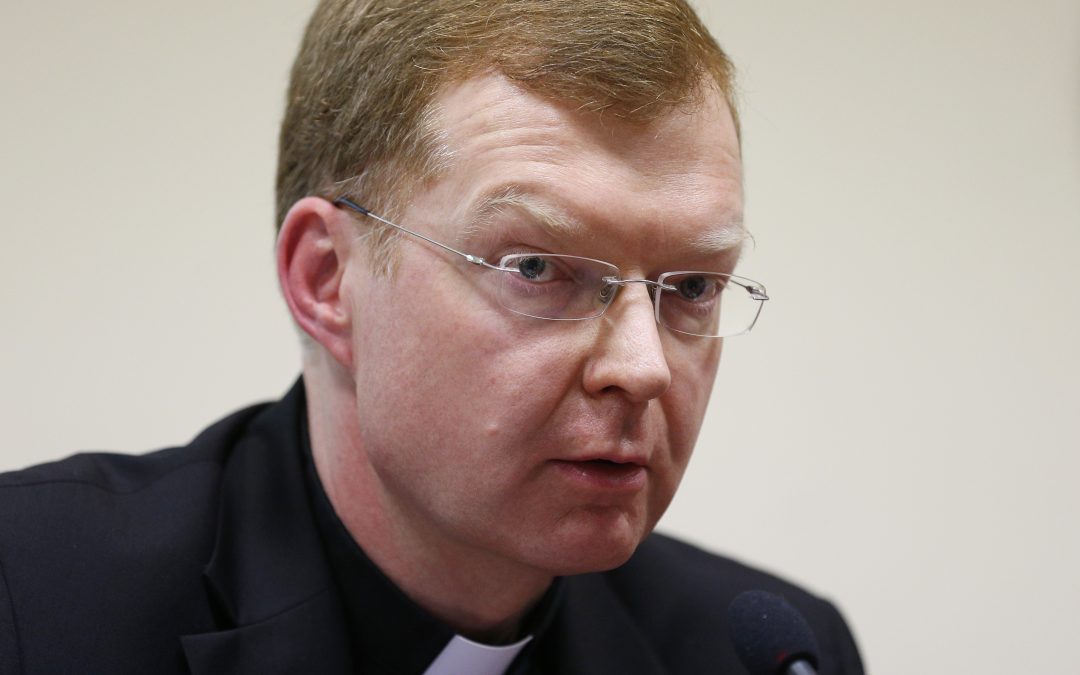 Jesuit Father Hans Zollner, a professor of psychology and president of the Center for Child Protection at the Pontifical Gregorian University in Rome, is pictured in a 2015 photo. Father Zollner has been on the frontlines of advocating for survivors of clerical sexual abuse and developing detailed programs to prevent abuse. He said the crisis unfolding again in the United States is a summons to a new way of envisioning the church and taking responsibility for it. (CNS photo | Paul Haring)

VATICAN CITY (CNS) — A member of the committee organizing Pope Francis’ February summit on the sexual abuse crisis said the meeting should include discussing ways to hold bishops accountable for handling cases correctly.

Addressing members of the Roman Curia before Christmas, Pope Francis said the meeting Feb. 21-24 of the presidents of the world’s bishops’ conferences, the heads of the Eastern Catholic churches and leaders of religious orders will reaffirm the church’s “firm resolve to pursue unstintingly a path of purification.”

In addition, he said, with the help of experts, the meeting will examine “how best to protect children, to avoid these tragedies, to bring healing and restoration to the victims, and to improve the training imparted in seminaries.”

Jesuit Father Hans Zollner, a member of the committee organizing the February meeting, told Vatican News Dec. 27 that in addition to the goals outlined by the pope, “we want to see how we also can put on the table the question of bishops’ responsibility, so there would be greater clarity about who must do something and who checks if the things the Holy Father and the church — the dicasteries — have ordered be done are, in effect, done.”

Father Zollner, president of the Center for Child Protection at Rome’s Pontifical Gregorian University, said the pope’s commitment to not undervaluing or covering up any case of abuse will require “a clarification of procedures, which aren’t so clear, especially when we are talking about the co-responsibility of a bishop or a provincial or head of an Eastern church with respect to what other bishops, provincials and superiors are doing.”

And, second, he said, there must be a change of attitude. “The rules, the laws as such, will not change hearts. We see this not only in Europe, but throughout the world. So, we must see how we can reinforce throughout the church this attitude of openness and attention to the protection of minors because that is the attitude Jesus teaches us.”

Father Zollner said he hoped the February meeting would help everyone in the church, everywhere in the world, realize “the urgency of making the protection of minors and bringing justice to the victims a priority.”

Vatican Media also spoke to Jesuit Father Federico Lombardi, former papal spokesman, who published an article in mid-December saying that church leaders who continue to believe clerical sexual abuse is a problem only in some countries or cultures must open their eyes and take action, otherwise “the church will continue to find itself facing one crisis after another.”

People have great expectations for the February meeting he said, but they also should take time to look at all the church has been doing to face up to the crisis and protect children.

“This isn’t something that began today or yesterday, but decades ago,” he said.

Bishops’ conferences in many countries “have undertaken important initiatives, have tried to understand what really happened, how to help the victims and how to establish a culture of prevention,” Father Lombardi said. And, beginning with Pope Benedict XVI, the universal church has strengthened its norms and procedures for dealing with cases.

“We must understand that the problem is very serious, very important for society and for the church,” he said, and that “there is a real renewal needed in the church, there is a long road to travel, but, at the same time, we are not starting from zero.”