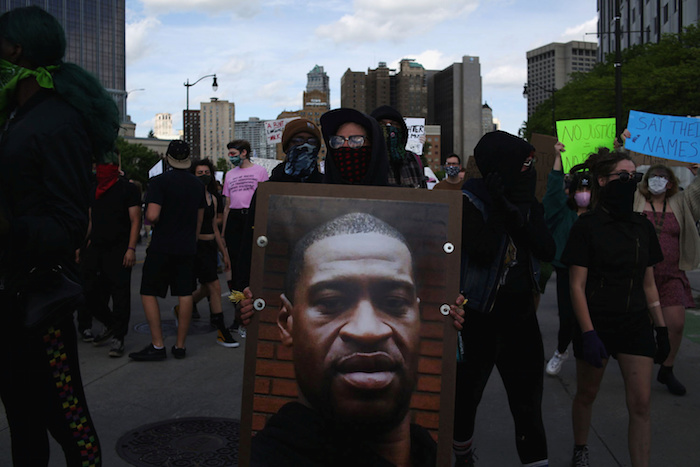 A protestor in Detroit holds a photo of George Floyd May 29, 2020. Demonstrations continue after a white police officer in Minnesota was caught on a bystander’s video May 25 pressing his knee into the neck of Floyd, an African American, who was later pronounced dead at a hospital. (CNS photo | Sylvia Jarrus, Reuters)

WASHINGTON (CNS) — Justice is what George Floyd and his family and friends deserve, and justice “through equal and fair treatment under the law is what every person in this country deserves,” said the U.S. bishop who is president of the National Black Catholic Congress.

He decried the racism on display in graphic detail in the now widely circulated video of a white officer “who refused to acknowledge a fellow human being’s cries of distress” while he had Floyd, an African American, pinned down on a Minneapolis street by holding his knee on Floyd’s neck for nearly nine minutes May 25.

“I can’t breathe,” Floyd gasped several times as he was held down. He appeared to lose consciousness or die and was later declared dead at the hospital. That officer, Derek Chauvin, and three other officers involved in the arrest of Floyd over a suspected counterfeit $20 bill were fired.

Chauvin was initially the only officer charged and faced third-degree and manslaughter charges, but by midday June 3 the murder charge was upgraded to second degree. The same day the other ex-officers — Tou Thao, J. Alexander Kueng, and Thomas Lane — were charged with aiding and abetting second-degree murder, and aiding and abetting manslaughter.

Bishop Campbell said the National Black Catholic Congress “joins the nonviolent calls and protests for a complete and transparent investigation of the killing of Mr. Floyd in Minneapolis.”

The congress also echoes, he said, the words of Archbishop Bernard A. Hebda of St. Paul and Minneapolis in calling for prayers for Floyd’s “grieving family and friends, peace for a hurting community and prudence while the process moves forward.”

“We need a full investigation that results in rightful accountability and veritable justice,” Bishop Campbell added, quoting the archbishop.

Justice and equal treatment for all under the law is what nation’s Founding Fathers “tried to promote in the Constitution and what this nation fought a Civil War to uphold, that ended 155 years ago, Bishop Campbell said. “However, the racism brought on by the enslavement of black Americans in the years leading up to the establishment of the United States of America to the Civil War, still exists and all too frequently displays its ugly effects today in racist attitudes and actions that discriminate one people from another.”

He quoted the Rev. Martin Luther King Jr, who once wrote: “Discrimination is a hellhound that gnaws at Negroes in every waking moment of their lives to remind them that the lie of their inferiority is accepted as truth in the society dominating them. … Law and order exist for the purpose of establishing justice and when they fail in this purpose, they become the dangerously structured dams that block the flow of social progress.”

Other national organizations of African American Catholics have joined their voices in urging justice for Floyd and calling for a reckoning of the nation’s systemic racism and concrete ways to bring about change.

“The National Black Sisters’ Conference condemns the viral disease of systemic racism that America has legitimized and practiced for over 400 years! We will not remain silent! There is more than one pandemic affecting our nation!” the organization said in a statement.

“If this country is to reclaim it moral stature, we must confess and atone for our original sin, or America will self-destruct as a nation,” it said.

Without justice there can be no peace, the sisters said, adding that “justice demands” that law enforcement be “held accountable for their willful negligence and compliance in racist activities and actions”; choke-holds and other life-threatening forms of physical restraint not be used when a suspect is not resisting arrest, and/or is already in custody; and “when justified, as in the death of Mr. George Floyd, law enforcement officers are held accountable for their actions, and when warranted, arrested and prosecuted to the full extent of the law.”

In its statement, the Knights of Peter Claver and Ladies Auxiliary, the nation’s only historically black Catholic fraternal order, said Floyd was “a man, a human, a being. Not a stat.”

“We call on all who are sworn ‘to protect and to serve’ — to carry out the that very motto. We call on all leaders elected to serve — to listen, to act, to legislate,” it said. “We call on all of God’s children created to love — to do just that — love.”

Anger, emotions, and outrage “must be followed by effective solutions that do more than just penalize murderous actions, but eliminate future ones,” it added. “The ink has run dry on writing statements, and it is now time to write laws, to write policies, to write sentences.”