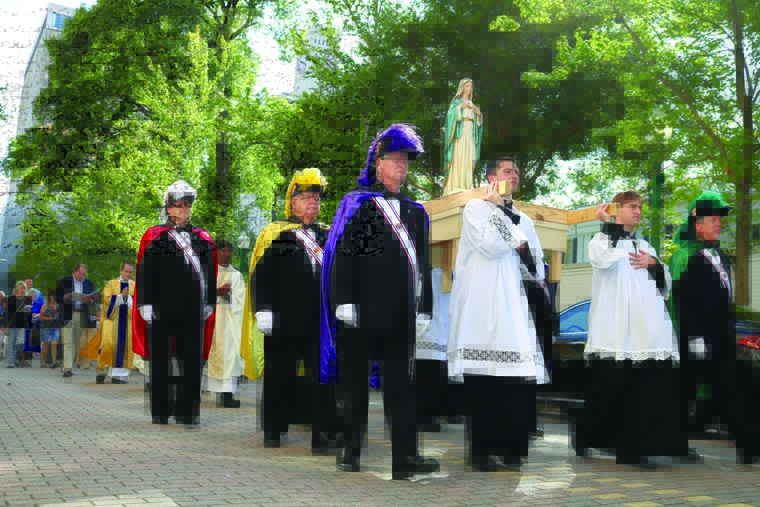 JACKSON, Miss. (CNS) — In a state where the Catholic population hovers at 3 percent, a Mississippi bishop in a very public way made the community aware that he was consecrating the Diocese of Jackson to Mary.

Bishop Joseph R. Kopacz led a procession through the streets of downtown Jackson at the end of an afternoon Mass at the Cathedral of St. Peter the Apostle and before the consecration.

Seminarians carried a statue of Mary as part of the procession and more than 100 Catholics joined in. The crowd then returned to the cathedral for a litany and the prayer of consecration written by Deacon Aaron Williams.

The act marks two events, the 100th anniversary of the appearance of Our Lady at Fatima and the official liturgical launch of the diocese’s pastoral priorities.

Bishop Kopacz and his pastoral team have been working for almost two years to get the priorities written and introduce them to the parishes. The process included listening sessions in each deanery of the diocese and a year of prayer, reflection and work with a consultant from Catholic Leadership Institute.

This fall, the bishop has asked the pastors to have teams in the parishes write local goals and priorities aligned with the new diocesan plan. The consecration places this work in Mary’s care.

Overall, the diocese has outlined three main priorities, namely to create inviting and reconciling communities; to facilitate lifelong formation “of intentional disciples”; and to “proclaim Jesus Christ and our Catholic faith.”

Deacon Williams included phrases from the new plan in the prayer of consecration. The weekend started with a rosary at the cathedral Oct. 7. More than 100 Catholics joined for the public prayer, led by diocesan seminarians.

People came from across the diocese to be a part of the Mass and procession. Tanya Britton, former secretary at Christ the King Parish in Jackson, retired to Tupelo several years ago, but returned to the cathedral for this event.

“I wanted to be a part of honoring the mother of Our Lord, to acknowledge her and to show my gratitude to her,” Britton told the Mississippi Catholic, Jackson’s diocesan newspaper. “Mary took me by the hand and gently drew me to the bosom of Jesus when I was so far from Him that I couldn’t imagine ever being reconciled. A mother’s love is what I needed.”

Britton praised Bishop Kopacz for carrying out the consecration in a “communal way.”

“Such a public witness reaffirmed my love for our bishop and my local church,” she added. “It was also a way for me to stay connected and remind myself we are not ever really isolated from either our local diocese or Rome. We’re all on this ‘pilgrimage’ together in a world in desperate need of a mother’s love and guidance.”

Elsa Baughman, retired editor for Mississippi Catolico, the diocese’s Spanish-language newspaper, has had a special devotion to Mary since she was a child. She said the procession appealed to her heritage.

“As a Hispanic, I loved the procession. In our cultures, processions are very important. We feel like we should raise Mary up on our shoulders and take her out into our neighborhoods — or into the streets of Jackson as we did here,” she explained.

The day before the consecration, Hurricane Nate made landfall in South Mississippi. Organizers had to watch the weather and come up with contingency plans for the liturgy in case the storm brought high winds and rain to the area. Bishop Kopacz praised diocesan chancellor Mary Woodward for all her work on the consecration, but quipped that she is “no meteorologist.” The day was breezy and a little hot, but not stormy.

“The weather was beautiful,” said Baughman. At one point, “the sun shone so brightly into the cathedral, and I thought, ‘This is God, smiling at us for doing this,’” she added.