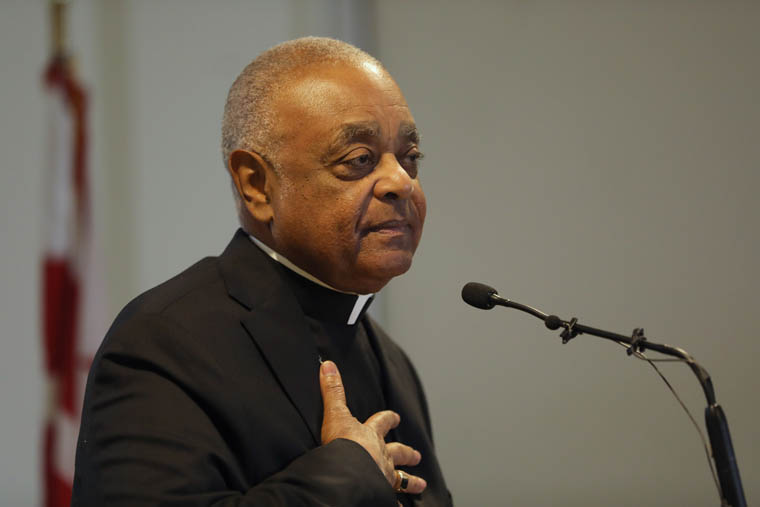 HYATTSVILLE, Md. (CNS) — Archbishop Wilton D. Gregory, set to become the new head of the Archdiocese of Washington, promised to serve with truth, love, and tenderness in a region where he acknowledged “unrest and anger,” after the downfall of former Washington Cardinal Theodore E. McCarrick and the church’s current sex abuse scandal.

“I want to offer you hope. I will rebuild your trust,” Archbishop Gregory said during an April 4 news conference. “I cannot undo the past, but I sincerely believe that together we will not merely address the moments we’ve fallen short or failed outright, but we will model for all the life and teaching of our Lord Jesus Christ and we will reclaim the future for our families, for those who will follow us. That is my greatest, indeed, it is my only aspiration.”

Archbishop Gregory was introduced to media gathered for the announcement at the Archdiocese of Washington’s pastoral center in Hyattsville by Cardinal Donald W. Wuerl. Pope Francis accepted Cardinal Wuerl’s resignation as Washington’s archbishop in October and named him apostolic administrator. The cardinal, now 78, had submitted his resignation, as is mandatory, to the pope when he turned 75, but it had not been accepted until last fall.

Cardinal Wuerl had faced pressure to resign following an Aug. 14, 2018, grand jury report detailing past sexual abuse claims in six Pennsylvania dioceses, which showed a mixed record of how he handled some of the cases when he was bishop in Pittsburgh from 1988 until 2006.

Cardinal Wuerl also recently faced questions about what and when he knew about past accusations involving McCarrick, who was stripped by Vatican officials of his clerical status Feb. 16 after months of accusations that he may have sexually molested minors and abused seminarians at various times and places in his 60 years as a priest.

Cardinal Wuerl remains apostolic administrator until the scheduled May 21 installation of Archbishop Gregory, who offered kind words for his predecessor while acknowledging shortcomings.

“It’s difficult to come into a situation where there is unrest and anger,” Archbishop Gregory said. “I’ve known Donald Wuerl for over 40 years. He is a gentleman. He works very hard for the church. He’s acknowledged that he’s made mistakes. That’s a sign of the integrity of a man. If I can shed light on what I think we need to do in response to some of the mistakes that he’s acknowledged and asked forgiveness for, I’ll do that.”

As he begins his tenure in Washington, following a 14-year stint in Atlanta, Archbishop Gregory said he wants to spend time “in the field.”

“For the foreseeable time, I’m not going to spend too much time in the office,” he said. “I have to be in the parishes, I have to meet with my priests. Why? Because I can’t be their archbishop if I don’t give them an opportunity to tell me what’s in their hearts, to come to know me and to establish a bond.”

He said he wanted to communicate to them his support, affection, and yearning to work for Catholics of the region. He acknowledged that Washington, as the country’s seat of political power, may ask for political savvy from its archbishop.

“I see this appointment to be the pastor of the Archdiocese of Washington, I was not elected to Congress and so I intend to speak and promote the church’s moral and doctrinal teaching that comes with the job, but I think my involvement with the political engines that run here has to be reflected through that prism,” he said. “I’m here as pastor. The pastor must speak about those things that are rooted in the Gospel but I’m not going to be at the negotiating tables. That’s not my place. My place is in the pews with my people.”

Archbishop Gregory, 71, who will become the first African American to head the Washington Archdiocese, fielded questions about civil rights icon the Rev. Martin Luther King Jr., how he would handle dissatisfaction in the pews, about him becoming Catholic when he was a teenager, and about clericalism and its role in the sex abuse scandal. He spoke of advice he had received from a priest before he went to study in Rome.

In some cases, clericalism manifested itself by “circling the wagons, so the episcopacy wouldn’t call one another to task,” he said.

“I think this moment has shown the folly of that approach to episcopal governance and episcopal collegiality,” he said.

And while “technical and structural responses” are necessary to combat the abuse scandal the church is facing, “they alone will never heal the heart of our people,” he said.

In the Archdiocese of Washington, which he called “home to the poor and the powerful,” he promised transparency and truth and said that during a time when the church had given the people in the pews many reasons to leave, “I want to give them a few reasons to stay.”

Rebuilding trust during a moment fraught with challenges throughout the church is not an easy task, he said, but added that he would rely on the grace of God to do so at the local level.

“When my service to you has ended, you will know I came to serve you with love, truth, and tenderness in the name of the Lord Jesus,” he said.

Catholic Church chronicler Rocco Palmo, who writes the popular blog “Whispers in the Loggia,” was sitting in the press area for the announcement. He called the archbishop the “healer-in-chief” and a calming presence, who would serve well the uneasy waters of Washington.

On the day of the announcement, Sister Patricia Chappell, executive director of the Washington-based Pax Christi USA, who has worked with Archbishop Gregory on various initiatives in the past, said “there’s good news today.”

“We’re rejoicing,” she said in a phone interview with Catholic News Service.

Sister Chappell, a member of the Sisters of Notre Dame de Namur, said that with his penchant for transparent communication and accountability, “I’m hoping we can move through this.”

“We welcome and congratulate him,” she said. “Our prayers and support are with him as he provides reconciliation and healing to a church deeply wounded.”