All around America, ‘itinerant prophet’ caught on 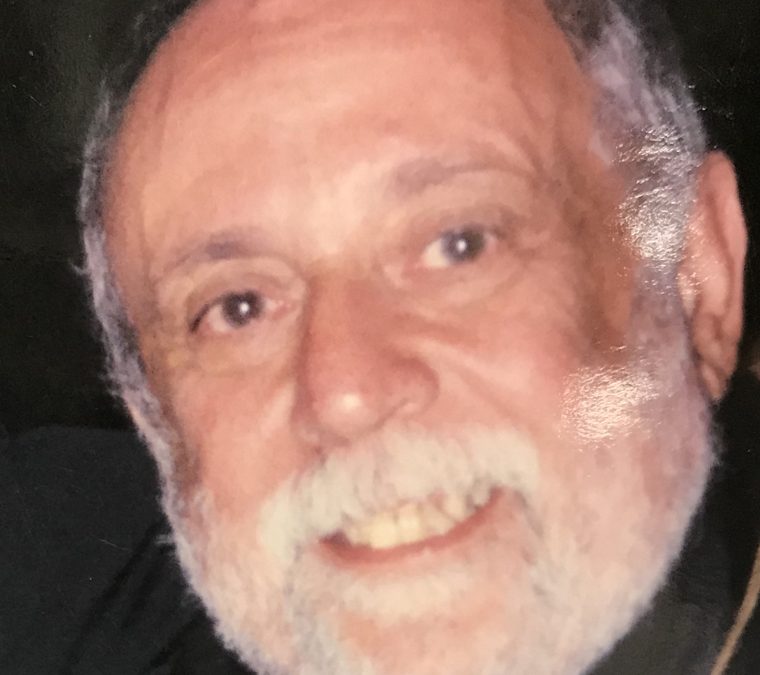 The priest who “always saw something more” rallied for one last look.

Long suffering from kidney cancer, Father Frederick A. Pompei, “itinerant prophet and preacher,” had aimed to drive from Florida to North Syracuse to be with his sister, Trish Pompei, and brother, Father Francis Pompei, OFM, in time for Holy Saturday.

“And that’s the last I heard his voice,” Trish said. She and Father Francis flew to Florida, praying on the entire flight to their parents (Felice and Santa) and to Jesus that God would keep their brother, the eldest sibling, alive in the hospital’s ICU.

“‘We’re here! Your sister and brother are here.’ … He immediately opened his eyes and squeezed our hands. And we just had to give glory and praise to Jesus because he answered our prayers. We were with him, and he knew we loved him, and he was with us.”

Hours later, the two visitors were holding Father Fred’s hand and hugging each other. “We saw Fred take his last breath and go into the Kingdom of Heaven,” Trish said. “And we — Francis and Fred and I — we all call it: He graduated. There’s no death. He graduated from this earth into the real home. And that’s what happened.”

“The Lord had chosen him to become an itinerant prophet and preacher,” Father Francis said April 17 at Father Fred’s funeral Mass at the Church of Our Lady of Pompei–St. Peter in Syracuse. Bishop Robert J. Cunningham was the main celebrant.

Father Fred is buried in St. Peter’s Cemetery in Oswego, the town where the Pompei siblings grew up.

“When our mother was pregnant with Fred,” Father Francis said, “she was so grateful to God for her first child that if it was a boy, she would dedicate him to the Lord. That she did.”

But two priests in the same family?

“She was unconventional,” Father Francis said of their mother, Santa. “She would say the rosary and then she would go to charismatic meetings. She taught us the Holy Spirit is not something to believe in; he actually can communicate with us, and he does. He can lead us, guide us IF we have that kind of relationship with Jesus; only then. … Oh, my mother was a real inspirational force with my brother, and then also with us; but my brother, he led the way. … [Msgr.] Ronnie Bill inspired my vocation to be a priest, but my brother taught me how to do it, what kind of priest you should be.”

Father Francis is a Franciscan friar of Holy Name Province. His many assignments have included overseas postings, a soup kitchen in Philadelphia, Pa., called St. Francis Inn Ministries, and duty in Buffalo. But as his brother’s health deteriorated over the last year and a half, he has lived at Blessed Sacrament Church in Syracuse.

Early in 1977, Father Francis said, his brother was at a crossroads in his priesthood: “He told me it was like the ‘Dark Night of the Soul’ described by St. John of the Cross.”

So that summer, Father Fred went to Mount Saint Francis Hermitage on the border of Endicott and Maine, N.Y. “He spent 40 days and nights in a tent by the pond, rain or shine, asking the Lord to reveal his will to him,” Father Francis said.

As a result, Father Fred met with then Bishop Frank J. Harrison and asked to be released from parish ministry. “The Lord had chosen him to become an itinerant prophet and preacher,” Father Francis said. “Like all prophets, there were those who didn’t understand or accept his new life and ministry, and this caused him great pain his whole life, feeling isolated and alone.

“Then he would go to his sacred place by Oneida Lake to say Mass, talk to the fish, as he always said, and let Jesus; the Blessed Lady, as he called her; and St. Anthony heal him. Then the phone call to his spiritual brother and friend, [Msgr. Frederic F.] Elkin, telling him what people said or were doing to him, knowing [Msgr.] Elkin would … put him back on the path with Jesus.”

‘Must be doing something right’

Msgr. Elkin would say to Father Fred: “So people are attacking you? Then you must be doing something right, so get off your butt and keep doing it.”

“I always told him,” Father Francis said, “‘Bro, I have a Franciscan habit, but you’re living it.’”

Father Fred once gave a weeklong retreat to Native Americans in southern Montana. “As the word spread to the whole reservation, the tribal chief attended to hear the man in the woven gray robe,” Father Francis said.

“On the last night of the mission, the chief led a solemn tribal ritual,  and proclaimed Fred as a ‘Holy Man of the Great Spirit,’ presenting him with a leather pouch, a sign that the Great Spirit walked with him.

“From the day Fred knelt before the crucifix at Mount Saint Francis, Jesus was Fred’s Lord and friend, St. Anthony was his companion, and the Holy Spirit was his strength and guide.” 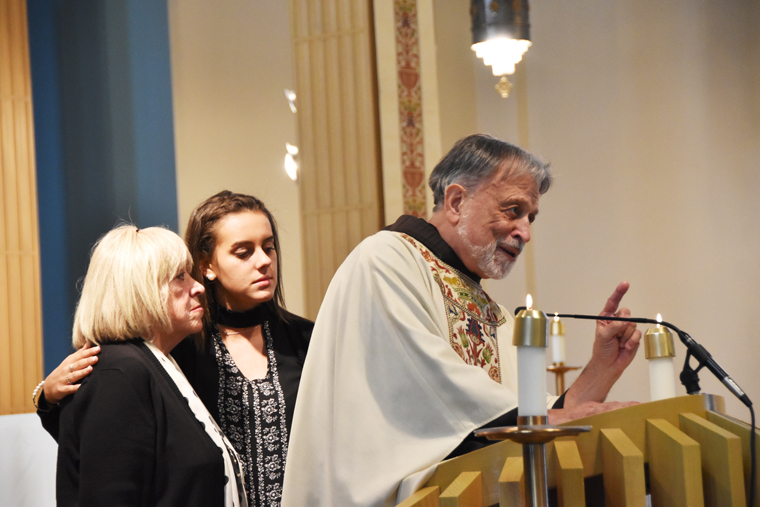 Delivering a remembrance April 17 at the Church of Our Lady of Pompei–St. Peter in
Syracuse is Father Francis Pompei, OFM, the brother of the late Father Fred Pompei. Other
speakers included Trish Pompei, left, the sister of the priest-brothers; and, next to Trish, Maria Mirizio, goddaughter to Father Fred. (Sun photo | Tom Maguire)

Msgr. Elkin, who also grew up in Oswego, was Father Fred’s great friend for over 38 years. The monsignor, of Virginia Beach, retired as a Navy chaplain in 2003 but still helps out at a Navy hospital and at military bases. When he served in Italy and Spain, Father Fred would visit him.

Father Fred “always saw something more,” Msgr. Elkin said. And his buddy rarely took no for an answer.

In Naples, Italy, the two buddies visited the Pontifical Shrine of the Blessed Virgin of the Holy Rosary of Pompei. Father Fred couldn’t wait to tell a very distinguished looking monsignor at the shrine that not only was his name “Pompei,” but also he lived at Our Lady of Pompei and here he was now in Pompei, Italy.

The monsignor made a gesture as if to say, So what? Msgr. Elkin then wanted to leave, but Father Fred said, “‘No, no, no, wait a minute.’ He was always like that.”

Father Fred found a janitor who set up a side altar for them, and the two priests ended up saying Mass at the shrine. “He got some rosaries, and he got some medals and holy water, and he brought it back to this parish,” the monsignor said.

‘He could sense things’

“I guess he could sense things, you know?” he continued. “And he did that a lot with people as he ministered to people.”

Father Fred “impacted many people,” his sister Trish said. She said the “wonderful kind words” spoken to Father Francis and her at their brother’s wake will always be held in their heart.

For 22 years, Father Fred spent winters at St. Gregory the Great Parish in Plantation, Fla.; then he came home for Easter.

At St. Gregory’s, Trish said, her brother “said Mass, heard confessions. Later when he started to get sick and the cancer kind of started to take over, he couldn’t say Mass, so he heard thousands of confessions; so they kind of called him ‘Padre Pio’; they loved him, and he always made them feel wonderful coming out of confession. And he knew that God gave him that calling later in his life to be the forgiver.”

The day after Father Fred died, she said, the people of St. Gregory’s held a memorial Mass in the packed church, including Confirmation and First Holy Communion students. “They had a program, prayer card with his face on it,” she said.

St. Gregory’s now has a plaque in its spiritual garden: “Fr. Frederick Pompei: Thank you for your many acts of selfless giving. You presence lives on forever.”

The people of St. Gregory’s had never met Father Francis and Trish. “We said, Why did Fred die in Florida and not here?” Trish said. “We know why. My brother planned this. He wanted to die in the place that he loved — that Francis and I could go down and meet these people, how much love they had for him for all he did for them.”

Father Fred also was greatly loved by his goddaughter, Maria Mirizio, of Cicero. Her parents, Sharon and Anthony Marizio, were close friends of Father Fred.

“He was like a grandfather to me,” Maria said.

“Throughout my years growing up,” she said, “his favorite quote to me was, ‘Don’t let school interfere with your education.’ … A quick phone call would turn into an hour-long conversation.”

Father Fred always found a special gift for her birthday. “When I turned 12,” she said, “he treated it like the 12 days of Christmas. But every year no matter how old I was turning he would always send me a pair of crazy Halloween socks.“Father Fred also taught me a lot about my faith, along with the guidance of St. Anthony. He taught me how to be mature and grown up. He did have his off days, but that never stopped him from trying to have a smile on his face.”

One year they went to a store for her birthday but the parking lot was full. “He said, ‘Pray to St. Anthony’; and sure enough, a parking spot came up. He was such a strong believer in St. Anthony.”

“He always joked around with me becoming an occupational therapist,” she said, “because he considers it as ‘other torture.’ He’s probably looking down laughing since he missed the opportunity for me to treat him.”

For his 50th jubilee in 2016, Father Fred told the Sun that a highlight of his priesthood came during a weeklong mission in Florida. Instead of having breakfast at the parish, he felt that something was off and instead went to McDonald’s.

A young woman came up to him and asked if he was a priest. She sat down and told him she had had an abortion, and she asked for forgiveness.

“I gave her absolution there in McDonald’s,” Father Fred said. After that experience, he said, “I knew why God sent me to Florida.”