‘All these courageous people … stand for the unborn’ 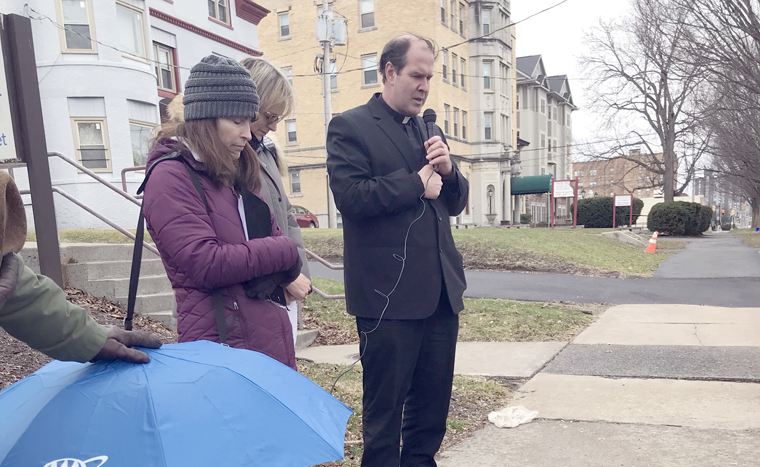 The pro-lifers deflect the drive-by barbs with prayer.

The 40 Days for Life Syracuse Campaign held a midway-point prayer service March 23 on the public right-of-way in front of Planned Parenthood on East Genesee Street in Syracuse.

Among the more than 20 attendees was Father James A. Schultz, who heard a passerby say, “Get a life.”

“We ARE trying to get a life,” Father Schultz said. Similarly, in October 2017 Father Christopher Ballard heard someone yell “Get a life!” at the people praying in front of Planned Parenthood for Respect Life Month.

“When you preach the Gospel you’re not going to be … loved by everybody,” Father Schultz said in an interview after leading a prayer at the midway point of the 2022 campaign.

In his prayer to the Lord he cited “all these courageous people who stand for the truth, stand for the unborn, which is so pleasing to you.” He also prayed that God would bring abortion to an end in this country and all over the world.

Anybody have a good voice?

Toward the end of the ceremony one of the leaders asked, “Anybody have a good voice here?”

A woman came up and sang a sweet song into the microphone, and then the ceremony concluded with a sing-along of “God Bless America.”

As he left the ceremony, Father Schultz said, “We’re not here to throw stones, that’s not what it’s about. It’s about forming a conscience collectively.” And he spoke of the regret and the depression caused by abortion: “You try to get into understanding how bad it is, you have to kind of go into that. You have to kind of … meditate on it and take it in more deeply.”

40 Days for Life says on its website that it is an “internationally coordinated 40-day campaign that aims to end abortion locally through prayer and fasting, community outreach and a peaceful all-day vigil in front of abortion businesses.”

Shannon Guy, co-coordinator of the 40 Days for Life Syracuse Campaign with Jeanie Owens, said, “We bring all the different denominations together in prayer.”

“So far I feel we’re doing pretty well out there on the sidewalk,” Guy said. “We’ve been able to reach some women that were in crisis pregnancy and we’ve been leading them to get free sonograms over to New Hope.”

Even when the 40 Days for Life campaign is not running, she said, many regulars, including those from different denominations, pray every week year-round in front of Planned Parenthood.

On March 11, Brenda and Bob, of Bridgeport, who declined to give their last name, did a shift in front of Planned Parenthood. Asked why she opposes abortion, Brenda said: “Well, because all life is precious including the babies in the womb. From conception they’re life. God created them and so they’re precious and they should be protected.”

“God even knows us in the womb,” said Bob, a pastor at Life Church in East Syracuse. “So really, God is pro-life, and we’re here praying, simply praying, and then at times we advocate when women are going into the clinic; we’ll encourage them to think about something else other than an abortion. And we offer … the alternative of helping the woman through birth, possibly helping them to parent or adoption. And both Brenda and I have adopted two children. So we’re here because we’re pro-life. … I believe it’s wrong to kill and to take a life.”

Also that day, Marcia Moran, of Syracuse, held a sign saying, “Pray to end abortion.” She is with Syracuse Alliance Church. Asked why she is against abortion, she said, “It’s the murder of babies.”

Fulton resident Gen Watson, of Fulton Alliance Church, was there too. “My mother lost a lot of babies,” she said, “and I know how precious human life is. I have a son that I miscarried at five months, so to me, every human life counts. … To me if I make any kind of difference here, I feel like my son hasn’t died in vain.”

Gen worked with her daughter Ashley Watson to create a sign with their pro-life message; Ashley is a  “20-year-old female conservative” and an art student in college.

“I’ve always been pro-life but I didn’t believe we could make a difference until I saw ‘Unplanned,’ Gen said. “That’s what brought us out here. But for her [Ashley], the reason she’s out here, is because she doesn’t have her brother. To her that matters. That’s a human life.”