Archbishop calls for peace after verdict, asks community to come together 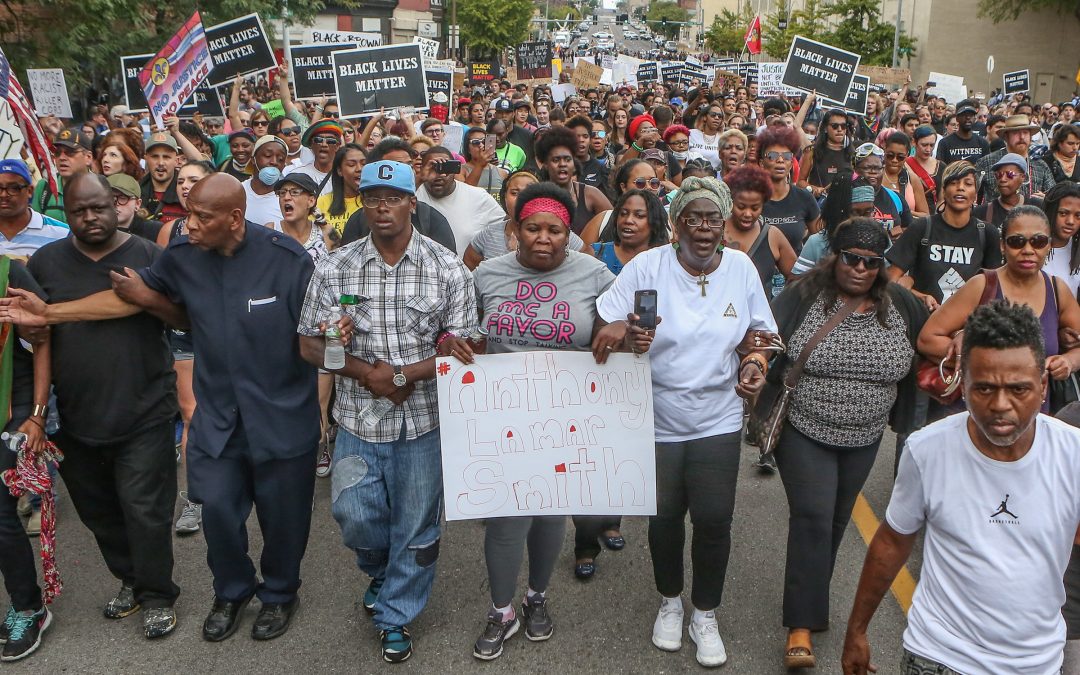 Stockley, who is white, was charged with first-degree murder in the shooting death in 2011 of Anthony Lamar Smith, an African-American. St. Louis Circuit Judge Timothy Wilson issued the ruling after Stockley waived his right to a jury trial.

“If we want peace and justice, we must come together as a community through prayer, mutual understanding, and forgiveness,” Archbishop Carlson stated. “While acknowledging the hurt and anger, we must not fuel the fires of hatred and division. We must ask God for peace in our own hearts and share it with those around us.”

Protesters began gathering in downtown St. Louis soon after the ruling was made public on the morning of Sept. 15. Media reports had warned of threatened disruptions if Stockley was found not guilty.

Protests turned violent, and more than 120 people were arrested Sept. 17 as protesters attacked police and broke windows, according to CNN, which also reported that a peaceful protest took place Sept. 18, not too far from the site of the previous night’s violence.

“Violence does not lead to peace and justice — they are opposing forces and cannot coexist,” the archbishop said in his statement. “I implore each of you to choose peace! Reject the false and empty hope that violence will solve problems. Violence only creates more violence. We must work together for a better, stronger, safer community, one founded upon respect for each other, and one in which we see our neighbor as another self.”

Archbishop Carlson was to join other faith leaders from St. Louis for an afternoon interfaith prayer service for peace and solidarity Sept. 19 in downtown St. Louis.

Two Catholic churches in St. Louis — St. Margaret of Scotland and St. Nicholas — opened for prayer and conversation after the verdict was announced. An invitation was extended to a regular peace and justice vigil held every Sunday at 7 p.m. on the stairs of St. Francis Xavier (College) Church.

At St. Nicholas Church, about half a dozen people came for the regular 12:15 p.m. Mass. Father Art Cavitt, who is the pastor and also director of the St. Charles Lwanga Center in St. Louis, said he kept the church, located just north of downtown, open throughout the day Sept. 15 for anyone in need of a place to pray or seek pastoral care.

The tensions that arose from Ferguson and what’s happening now, Father Cavitt said, “say something about us, and our country and humanity and our needs. There’s this festering that has been happening — in our communities and in ourselves. It’s more reflective of that, than a specific case that pushes a button.”

Reflecting on the Sept. 15 feast of Our Lady of Sorrows, Father Cavitt said that there are people who, like the Blessed Mother, have been heartbroken time and time again, but yet keep saying “yes” through the lens of faith.

It was “a chance to join together as God’s beloved coming to pray for our metro area and all cities (and) to resist situations that can pull us apart,” said Amanda Suchara, media coordinator for the parish.

Four Catholic high schools in St. Louis closed in anticipation of the verdict.

By mid-afternoon Sept. 15, several hundred people were assembled at a downtown intersection near City Hall. Students and staff from St. Louis University were present at different points during the day.

Father Christopher Collins, the university’s assistant to the president for mission and identity, started the day at St. Louis University’s School of Law, just a couple of blocks from the protest site. He and several other clergy members went to the street to pray for about half an hour.

As a Jesuit, “you want to follow in a pastoral way — to be where people are hurting and to be present,” he said. “We called on God’s love for all of us.”

A group of several dozen St. Louis University students connected on GroupMe and went downtown after their morning classes.

“I came because it’s the right thing to do. I want to stand with my community and protest what’s going on here. It’s not right,” said junior Michael Winters, who is studying economics.

“The sense of complacency that people have, in that these sorts of things happen and some people come down to protest, but then we just sort of let it slide. I think I’m guilty of this as well, at times,” said junior Charlie Revord, who is studying sociology and economics.

“Today is just a reminder that we have to keep up the pressure to try and make change,” he added. “It’s only going to come through coming together, having dialogue and really standing in solidarity with the people who are suffering.”

Kenny and Brinker are staff writers at the St. Louis Review and Catholic St. Louis, publications of the Archdiocese of St. Louis.