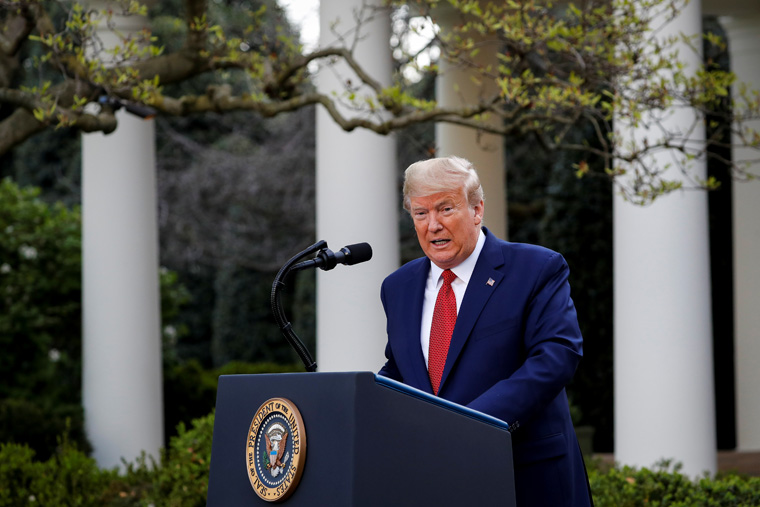 U.S. President Donald Trump speaks during a news conference at the White House in Washington March 29, 2020. On March 27 he signed into law a bill providing $2.2 trillion in relief in response to the coronavirus. (CNS photo | Al Drago, Reuters)

WASHINGTON (CNS) — Citing provisions of the $2.2 trillion federal relief package that will aid poor and vulnerable people as well as workers, Archbishop Paul S. Coakley of Oklahoma City thanked Congress and President Donald Trump for putting the law in place.

Expenditures mandated in the Coronavirus Aid, Relief and Economic Security Act, or CARES Act, also will help people with immediate relief who have been laid off and will have difficulty in finding a new job, the archbishop, chairman of the U.S. bishops’ Committee on Domestic Justice and Human Development, said in a March 28 statement.

Congress negotiated the relief measure under a relatively quick timeframe as the U.S. economy has ground to a halt in recent weeks as the new coronavirus has swept through the country. The Senate passed the measure late March 25 and the House of Representatives followed March 27. Trump signed the law soon after the House vote.

Archbishop Coakley also pointed to other provisions of the CARES Act, such as the $1,200 in cash assistance to low- and middle-income people and aid to hospitals and charitable agencies, “which will be asked to do more than ever during this crisis.”

In his statement, the archbishop said he expects the federal government to adopt another measure to respond to the worsening economic crisis as unemployment claims continue to increase.

“There are some areas where aid and relief can improve,” he said. “We will continue to advocate for those most in need, for food security, for the homeless, for prisoners, for the sick who have large medical bills, for all Americans who are struggling to make ends meet, and for those who have lost friends and loved ones.”

In addition, Archbishop Coakley expressed disappointment that “certain aid and relief was not extended to the undocumented” and said it was “extremely concerning that testing and access to health care coverage was denied to certain immigrants.”

“The health and well-being of all in this crisis is threatened if anyone is categorically excluded from getting help,” he said.

The statement also cited Pope Francis’ reflection on the Gospel of Matthew in which Jesus calmed the stormy sea. He said Lent offers the faithful “a time to return ever more so to our faith, to trust in the Lord, even in the midst of all this trouble.”

Bill O’Keefe, executive vice president for mission, mobilization and advocacy at CRS, said in a statement March 27 the law includes key emergency funding to assist with the international response to COVID-19.

He cited $2.3 billion allocated to the Department of State and the U.S. Agency for International Development, $350 million for migration and refugee assistance, and $258 million for international disaster assistance as important expenditures.

“As Martin Luther King said during troubled times, the world is a ‘single garment of destiny.’ We are in this together as a global family. What affects one of us affects all of us. Supporting vulnerable populations now and into the future is the American way, and in our own best interest,” O’Keefe explained.

He added that CRS continued “ramping up to prevent the spread of the virus.” The U.S. bishops’ overseas relief and development agency is working with local partners in more than 15 countries in responding to COVID-19 to support refugees, migrant people and other vulnerable people, he said.

Among the efforts was the evacuation of 250 people from a tent city in the Philippines, O’Keefe said, “before, a lockdown would have made them a prime target for infection.”