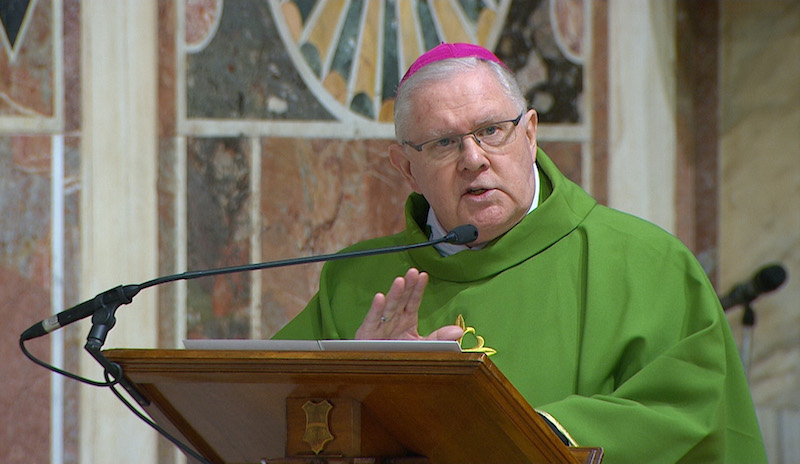 Archbishop Mark Coleridge of Brisbane, president of the Australian bishops’ conference, gives the homily during a Mass on the last day of the four-day meeting on the protection of minors in the church, at the Vatican Feb. 24, 2019, in this image taken from Vatican television. (CNS photo | Vatican television)

VATICAN CITY (CNS) — The Catholic Church needs a true conversion that places survivors, and not the institution, as the focus of its concern as it enacts measures to combat the sexual abuse of minors and vulnerable people, said Australian Archbishop Mark Coleridge of Brisbane.

Like Nicolaus Copernicus’ discovery that the earth revolves around the sun, the church is need of a “Copernican revolution” where “those who have been abused do not revolve around the church but the church around them,” Archbishop Coleridge said in his homily Feb. 24 during the closing Mass of the Vatican summit on child protection.

“In discovering this, we can begin to see with their eyes and to hear with their ears; and once we do that, the world and the church begin to look quite different,” he said. “This is the necessary conversion, the true revolution and the great grace which can open for the church a new season of mission.”

While Pope Francis presided over the final Mass of the four-day summit in the Sala Regia (literally, “royal room”) of the Apostolic Palace, Archbishop Coleridge gave the homily.

Built in 1573, the palatial antechamber features frescoes depicting critical, and even tumultuous, moments in the church’s history, such as the Battle of Lepanto of 1571 and the St. Bartholomew Massacre of 1572.

Through the art, the room becomes “a place where earthly and heavenly powers meet, touched at times by infernal powers as well,” Archbishop Coleridge said. In that place, God “invites us to contemplate power.”

“Power is dangerous because it can destroy,” he said. “And in these days we have pondered how in the church, power can turn destructive when separated from service, when it is not a way of loving, when it becomes power ‘over.'”

Archbishop Coleridge warned the bishops that in giving priority to a desire to protect the church’s reputation, “we will not go unpunished.”

Those who abuse or cover up abuse use their power “not to create but to destroy, and even in the end to kill” the ones who are anointed by God, “even the weakest and most vulnerable of them,” he said.

Jesus’ command to “love your enemies” in the Sunday Gospel reading, he added, is a reminder for the church to not view as “the enemy” those who have exposed abuse and cover up in the church.

“At times, however, we have seen victims and survivors as the enemy, but we have not loved them, we have not blessed them,” he said. “In that sense, we have been our own worst enemy,”

The church, the Australian archbishop said, has a mission that demands “not just words but real concrete action” that brings justice and healing to survivors, strengthens the formation of those entering the priesthood and religious life and eradicates abuse from the church.