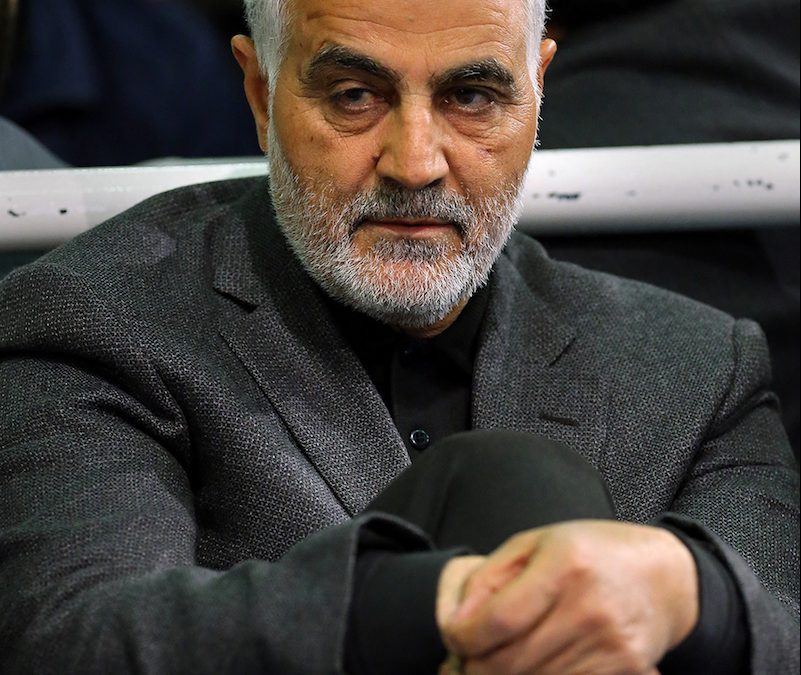 AMMAN, Jordan (CNS) — Iraqis fear their country, already weary from years of war, may be dragged into a conflict between the United States and Iran, following the U.S.-targeted killing in Baghdad of Iran’s top general, Qassem Soleimani.

“We prayed during the days of Christmas for peace on earth, and the timing of this revenge from America creates in us a big anxiety about what will happen,” Chaldean Catholic Archbishop Yousif Thomas Mirkis of Kirkuk, Iraq, told Catholic News Service by phone.

“This can also divide the population. Some are against. Some are for,” Archbishop Mirkis explained, but warned that the assassination of Soleimani, known as the architect of Tehran’s proxy wars in the Middle East, could spark further sectarian divisions in Iraq between Sunni Muslims and Shiites.

Many of the recent demonstrations rocking the capital, Baghdad, and southern Iraq were against the growing influence of Iran and Soleimani’s al-Quds Force inside Iraq. Soleimani was widely seen as the second-most-powerful figure in Iran, behind Ayatollah Ali Khamenei, Iran’s supreme leader. Soleimani is believed to have been responsible for hundreds of U.S service member deaths in Iraq. He was also Iran’s main strategist in the Syrian conflict.

“We only pray that the situation can be calm and peaceful. We are waiting to see,” Archbishop Mirkis said. “The situation in Baghdad and the South is more troubled. But Kirkuk and Kurdistan region is still calm. Until now, this is all that we can say.”

The drone attack was the lead news story in L’Osservatore Romano, the Vatican newspaper, Jan. 3: “The raid last night was only the latest episode in a long escalation of tensions culminating in the attack Dec. 31 of a crowd of demonstrators on the U.S. Embassy in Baghdad.”

“I think tensions have reached a level never seen before, and this is worrying and further complicates the situation in the region, which truly appears to be intensely heated,” he said.

Meanwhile, the U.S. Embassy in Baghdad issued a security alert telling Americans to “depart Iraq immediately, via airline while possible, and failing that, to other countries via land.”

The Soleimani killing was sparked by a series of escalating attacks between the U.S. and Iranian-backed forces. It began with the Iranian-backed Iraqi Shiite militia Kataeb Hezbollah’s firing of 31 rockets into a base in Kirkuk province Dec. 27. The attack killed an American contractor and wounded several U.S. and Iraqi servicemen. In response, the U.S. bombed five of the militia’s sites in Iraq and Syria. Militia supporters retaliated by setting fire to the wall and attacking the U.S. Embassy in Baghdad.

Fawaz Gerges, professor of international relations at the London School of Economics, said many are now anxious about what action Tehran will take against the U.S. and its interests.

Former U.S. Ambassador Matthew Bryza, now of the Washington-based Atlantic Council, said he believes Iran may use one of its proxies, such as the Lebanese Shiite militia, Hezbollah, to carry out a retaliatory attack, possibly against Israel, a U.S. Mideast ally.

Analysts expect an emergency session of the Iraqi parliament Jan. 4 may seek to end the longstanding U.S. military presence in Iraq. They believe such a move would have disastrous consequences for the fight against Islamic State militants.

Adel Abdul-Mahdi, Iraq’s outgoing prime minister, called for the emergency session, saying the U.S. presence there is limited to training forces to fight terrorism. He described the attack that killed Soleimani as a “violation” of conditions for the U.S. troop presence.

The World Council of Churches appealed for all sides to “exercise maximum restraint, to refrain from further escalation, and to give priority to the welfare of all people of the region, and their right to peace and stability after so many years of violence and bloodshed.”

“Gen. Soleimani was no innocent victim of war, having been the architect and promoter of armed violence in many parts of the region, but this attack and anticipated reactions to it threaten even wider and more disastrous conflict in the region,” said the Rev. Olav Fykse Tveit, WCC general secretary. “As destabilizing as Gen. Soleimani’s activities have been, the consequences for the people of the region of more intensive conflict are incalculable.”