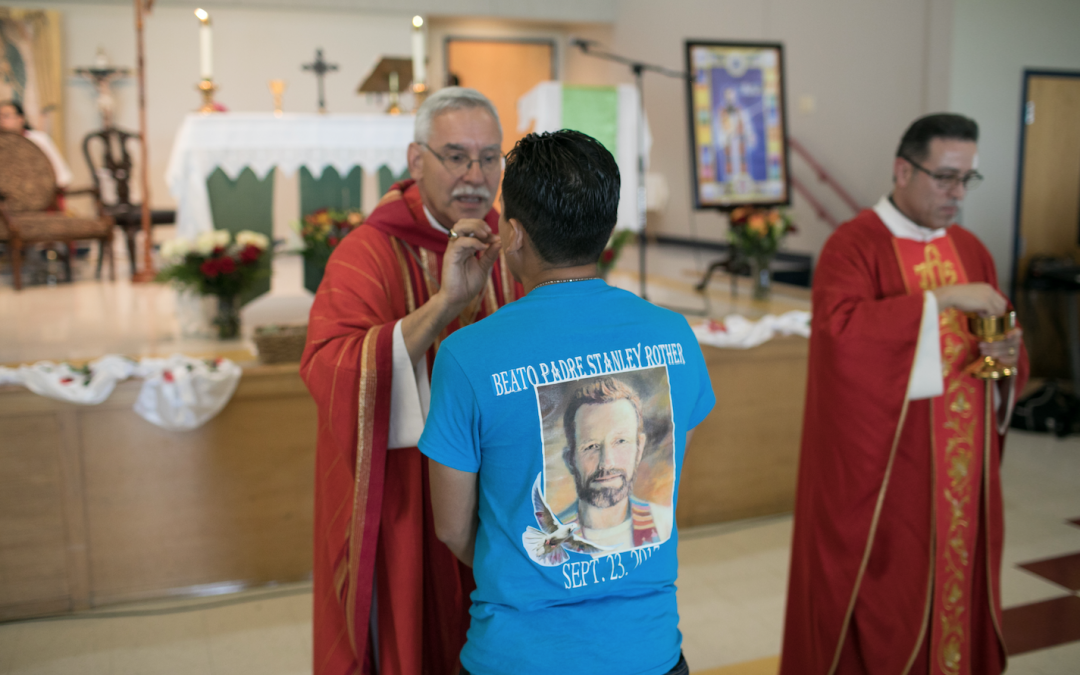 DECATUR, Ark. (CNS) — Only a day after the first officially recognized U.S.-born martyr was beatified in Oklahoma City, a new Spanish-speaking mission 200 miles away in the northwest corner of Arkansas became the world’s first Catholic community named for Blessed Stanley Rother.

“Today is a happy day for you, the Catholic community of Decatur,” said Bishop Anthony B. Taylor of Little Rock in his homily during a Sept. 24 Mass of dedication for the mission. “You are now a mission under the patronage of Blessed Stanley Francis Rother. This will make you the first church anywhere in the world bearing his name.”

The Catholic community began to meet in people’s homes for weekly prayer four years ago. In March 2014, Father Salvador Marquez-Munoz celebrated the first Spanish Mass in a community center. He is now the pastor of Blessed Stanley Rother Mission as well as St. Mary Parish in Siloam Springs.

Since April, the community has been renting a small, former Baptist church for a weekly Spanish Mass, but the dedication Mass was held in the local elementary school because the small church could not accommodate the number of people who came to the liturgy.

The mission numbers about 80 parishioners, members of roughly 20 families who are immigrants namely from Guatemala, El Salvador and Mexico. Many of them work in the local chicken-processing plant or in construction.

“Your becoming established formally as a mission,” Bishop Taylor told the community, “is due in large measure to your commitment to Jesus Christ and the initiative that you have taken to live your Catholic faith in a place where previously there have been very few Catholics.”

He emphasized, “We are not dedicating a parish building today. What we are doing is establishing formally as a community. After all, the church is the people, not the building. And it is you who are being established as a quasi-parish not the building.”

He added, “I am impressed by how much you have grown so far. And I believe some of you are already working on figuring out how to get a more adequate building for your community.”

Bishop Taylor has a great devotion to the new mission’s patron. Like Blessed Rother, he is a native of Oklahoma. Before becoming Little Rock’s bishop, he served as vicar of ministries in the priest’s home diocese, the Archdiocese of Oklahoma City, sponsor of the Guatemalan mission where the martyred priest served.

He was the first episcopal delegate for the archdiocese’s sainthood cause for Father Rother, and in that role conducted many interviews, mostly in Guatemala, for documentation about his life and ministry that was sent to Rome.

In a presentation about the martyred priest before Mass, Bishop Taylor told the gathering that Father Rother was “a missionary who gave his heart to his people and whose heart literally remains with his people 36 years after he loved them to the end. This is the story of a man who challenges me to ask what my response would be if the Lord were to ask me, ‘Do you love me this much?’”

Working on his cause “was one of the greatest privileges of my life,” Bishop Taylor said. “Father Rother captured my heart the day he died, and I have drawn on his witness ever since to find the courage I need to do what is right when the situation is difficult.”

In his homily, he noted that in addition to serving two parishes in Santiago Atitlan and Cerro de Oro, Guatemala, Blessed Rother “also served many small and isolated communities in the villages and the plantations of the area, sort of like you here in Decatur, who are a long way from anywhere.”

During the Mass, Tim Muldoon, the director of mission education for Catholic Extension, told the community, “The occasion of naming a community after Blessed Stanley Rother is an opportunity for us to highlight the importance of mission to the life of your faith community as well as to the entire church in the United States and the rest of the world.”

Catholic Extension is supporting the new community. The Chicago-based organization is the leading supporter of missionary work in poor and remote parts of the United States.

Muldoon was in Decatur to present the mission a $2,500 grant from Extension, called a “Francis grant” after Father Francis Clement Kelley, founder of Catholic Extension, who in 1924 became the second bishop of Oklahoma City.

In the 1950s and early 1960s, Catholic Extension donors helped pay for the seminary education of Blessed Rother and other seminarians of what was then the Diocese of Oklahoma City-Tulsa. (In 1973, Tulsa became its own diocese and Oklahoma City was elevated to an archdiocese.)

Catholic Extension also was a sponsor of the Sept. 23 beatification ceremony in the Cox Convention Center in Oklahoma City.

Bishop Gonzalo de Villa Vasquez of Solola-Chimaltenango, Guatemala, the diocese where Blessed Rother served for 13 years, confirmed that no churches there have yet been named for the martyred priest. “Not yet,” he said, “but they’re coming.”