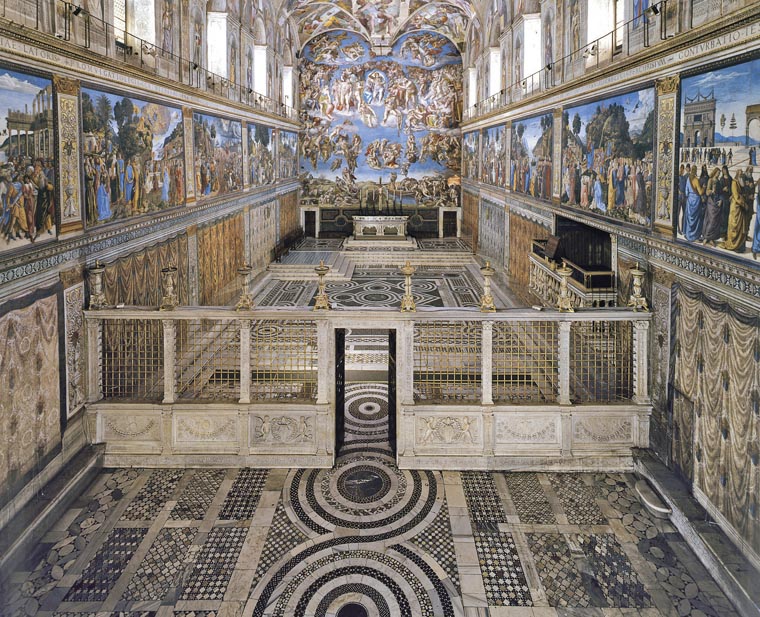 VATICAN CITY (CNS) — What do the Sistine Chapel, a used car with 186,000 miles on the odometer and a statue of Our Lady of Lujan made out of metal from an abandoned factory have in common?

Besides being found in the Vatican Museums’ collections, the 1984 Renault, the Renaissance frescoes and the recycled scrap all help showcase Pope Francis’ concept of art, according to museum officials.

But not many people know about Pope Francis’ love of film, literature, music and the role he believes art can play in evangelization, social change and spiritual transformation. A new documentary produced by the Vatican Museums and Vatican City State aims to fill that void.

Titled “My Idea of Art,” the 45-minute film is based on the book of the same name, authored by Pope Francis after Italian journalist Tiziana Lupi transcribed it from a sit-down interview with the pope in May 2015.

While the book is available only in Italian, the documentary film aims for a global audience, with subtitles in six languages and yet-to-be-announced theatrical releases worldwide. The Vatican also approved plans to submit the film for the Academy Awards’ consideration for 2018.

Like the book, the film presents “the ideal art gallery” of Pope Francis, offering stunning visuals of selected masterpieces in the Vatican’s collections to colorfully illustrate the pope’s vision for art.

The images are layered with insight from Lupi, explanations of the artwork by Sandro Barbagallo, curator of historical collections at the Vatican Museums, and snippets of Pope Francis speaking about the culture of waste and how art and evangelization exalt the beauty of God’s creation and seek to recover what others have thrown away.

For example, one of the 11 works chosen as exemplifying Pope Francis’ “gospel of art” is the “Belvedere Torso,” from around the time when Christ lived. The contorted and damaged marble figure is missing arms, head and lower legs, which prompted Pope Julius II to ask Michelangelo to fix it.

But Michelangelo was so taken by its beauty, he dared not touch it, making it, instead, his model for the Sibyls in the Sistine Chapel, Barbagallo said in the film’s narration. Many other artists saw beauty in this nude’s brokenness, too, and Auguste Rodin’s “‘The Thinker’ was inspired by this rejected piece of marble,” the curator said.

“The artist is a witness of the invisible,” Pope Francis says in the film’s narration, “and works of art are the clearest proof that the incarnation is possible.” Which is why, the pope says, artists can counteract today’s throwaway culture and evangelize, because art reveals “what cannot be seen; for some it’s an illusion. Instead it is hope which we all can believe in.”

“Pope Francis thinks like an artist, without a doubt,” Argentine sculptor Alejandro Marmo told Catholic News Service at the documentary’s debut at the Vatican Museums in late June.

The same way artists find beauty in and shape the materials right there before them, Pope Francis welcomes and gives form or direction to the malleable heart in his midst, he said. It’s a hands-on, artist’s approach in offering pastoral care, he said.

“He combines intelligence, humility, human labor and his closeness to people who have no power. For me, this is the way to create real beauty,” said Marmo, who got to know the pope when he was archbishop of Buenos Aires.

Then-Cardinal Jorge Bergoglio and Marmo — at the time a troubled and disgruntled young man — found they were both alarmed by the culture of waste and hopelessness in their city, which was facing severe economic and social crises, Marmo has said.

Marmo approached other church leaders with a desire to use art as a way to have a positive impact on people and society, but Cardinal Bergoglio “was the first bishop who listened” to his angry and “abstract” rantings, Marmo told CNS.

While church leaders are usually very well-educated and cultured, “to speak with an artist, listen to his ideas is difficult, and I believe that this was what was so important for me, because he opened up the spiritual world for me,” Marmo said. He said the cardinal showed him that Jesus — broken and discarded — was present in the real world, “in the peripheries.”

The pope took Marmo, also a son of immigrants, to the outskirts where art usually has no place, and told him to create a “bridge” and dialogue with the people there. Marmo soon began the kind of initiatives he still runs today, involving young people discarded by society to sort through and use materials thrown away by the economy and then to breathe new life into both.

After the cardinal was elected pope, he and Marmo kept in touch, with Marmo creating a crucified “Christ the Worker” and “Our Lady of Lujan” for the pope. Now in the Vatican Gardens, the two pieces were built with scrap metal culled from junk piles at the papal summer villa and farm in Castel Gandolfo.

“My testimony is a young man who once spoke with his bishop, he listened to him and he healed him of a disease called sadness, of being absent in life, of missing a spiritual life,” Marmo said.

“I believe this is the art of a bishop. Because a bishop’s art can’t be seen in an office. You see it out there,” he said, pointing to the peripheries.fea