As Cardinal Pell awaits sentence, his appeal is fast-tracked to June 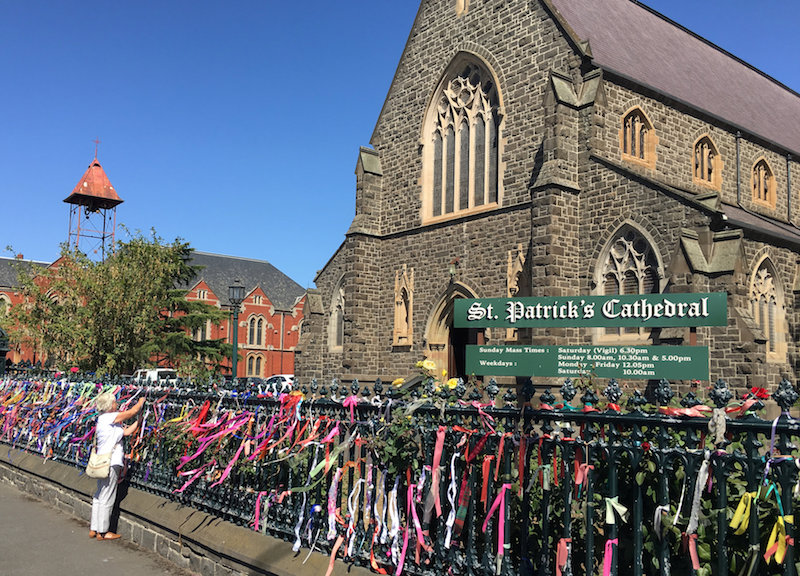 A woman puts a ribbon on the fence of St. Patrick’s Cathedral in Ballarat, Australia, Feb. 27, 2019. The ribbons raise awareness and show support for victims of abuse. (CNS photo | Jonathan Barrett, Reuters)

SYDNEY (CNS) — Australian Cardinal George Pell, the highest-ranked Catholic clergyman to be found guilty of child sexual abuse, has had his appeal process fast-tracked and might spend only three more months behind bars before it is heard.

The Victorian Supreme Court has set June 5 and 6 for the bid for an appeal to be heard and any subsequent appeal hearing over which three justices of the Australian state’s highest court will preside.

Lawyers who spoke who Catholic News Service on the condition of anonymity said the appeal date was unusually soon given most appeals hearings are set a year or more in advance. They also noted it was unusual for an appeal date to be set before a sentence has been handed down.

Cardinal Pell is in jail in Melbourne awaiting his March 13 sentencing after being found guilty in December of five historic sex offenses against two choirboys, including oral rape. The sentence was revealed Feb. 25 after a gag order on the case was lifted when a second trial of the former senior adviser to Pope Francis was pulled by prosecutors. Cardinal Pell withdrew an application for bail during the period between his sentence and appeal.

Prominent Sydney lawyer Bret Walker will replace Cardinal Pell’s original defense counsel, Robert Richter, who has been criticized for mismanaging the cardinal’s defense and drew criticism for remarks at the sentencing hearing Feb. 28. The following day, Richter issued a lengthy written apology after he appeared to denigrate the severity of the abuse that saw one victim commit suicide at 35.

Beyond his appeal, Cardinal Pell is facing a civil trial after a man alleged the cardinal sexually assaulted him Ballarat, Australia, during the 1970s. The complainant, who has not been named, was one of those who was due to appear for prosecutors in Cardinal Pell’s second trial, scheduled for April but withdrawn by prosecutors Feb. 25.

The plaintiff was a ward of the state at the St. Joseph’s Boys Home in Ballarat at the time of the alleged incident; he is suing Cardinal Pell; the trustees of Nazareth House, which ran the home; the state of Victoria; and the Archdiocese of Melbourne.

The lawsuit was lodged a day after Australia’s bishops and priests addressed Cardinal Pell’s conviction for sexually assaulting two 13-year-old choirboys when he was archbishop of Melbourne in 1996.

Archbishop Anthony Fisher of Sydney told the congregation at Sydney’s St. Mary’s Cathedral March 3 not to be “too quick to judge” the cardinal.

“As the cardinal’s matter is ongoing in the courts, I cannot comment on the substance; I urge people not to draw any final conclusions until the appeal judges have had their chance to review this matter. Amid the heated emotions of the present, I also pray for public calm and civility,” said Archbishop Fisher, who added he saw “serious questions for the appellate court to examine.”

“If we are too quick to judge, we can end up joining the demonizers or the apologists, those baying for blood or those in denial.”

The verdict has been questioned publicly by Cardinal Pell’s supporters in the church and in the Australian media.

Australia’s former prime minister, the Jesuit-educated, one-time seminarian Tony Abbott, who ran the country from 2013 to 2015, also weighed in.

Melbourne Archbishop Peter Comensoli told his parishioners that the soul of the Catholic Church “has been grievously wounded from the evil of sexual abuse.”

“It feels like we have reached Golgotha (the place where Christians believe Jesus was crucified), where the smell of death is thick in the air and the sense of panic and confusion is pervasive.”

Archbishop Comensoli pointed to the “vastly divergent positions” people had taken on Cardinal Pell’s conviction, “from cries of condemnation to cries of injustice.”

“What has spoken to me in all these posts and tweets is that they express something of the point of desolation at which God’s church in Melbourne has arrived,” he said.