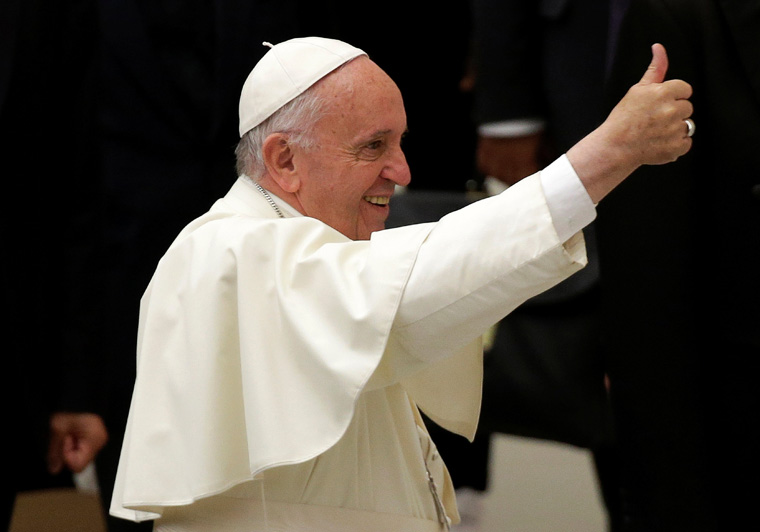 VATICAN CITY (CNS) — Life is a long series of hellos and goodbyes, so don’t be afraid to let go of the past; remember old friends, but keep moving and be open to the new, Pope Francis told students as the school year was coming to an end.

“We have to learn to see life by seeing the horizons,” not the walls that can make people afraid because they don’t know what is on the other side, he told thousands of adolescents during a 45-minute encounter at the Vatican June 2. The middle-schoolers were part of Communion and Liberation’s “The Knights of the Grail” educational initiative.

In the informal Q-and-A, a teen named Marta told the pope how scared she was to be leaving middle school and most of her best friends as they head on to high school next year. “Why do I have to change everything? Why does growing up make me so afraid?” she asked him.

“Life is a constant ‘Good morning’ and ‘Farewell,’” he said, with the goodbyes sometimes meaning forever.

“You grow by encountering and by taking your leave,” he said. “If you don’t learn to say goodbye well, you will never learn how to encounter new people.”

This moment of change in life is “a challenge,” he said, but “in life we have to get used to this journey of leaving something behind and encountering something new.”

Noting that Marta had used the word “afraid” a number of times in her question, the pope said the risk that comes with the challenge is that fear will render a person immobile, “too serene” and unable to grow.

Those who give up, settle down and say, “Enough,” close off the horizons that are out there waiting for them and do not grow.

“But if you go outside, to the countryside, what do you see?” he asked. “I see everything,” she replied.

“Everything! You see the horizon,” the pope said. “We have to learn to see life by looking at the horizons” that are always open, always lying ahead, by meeting new people and having new experiences.

Instead of framing the future with terms like “fear” or “afraid,” he added, try “using the word ‘a challenge’ more” and remembering, “I will win this challenge or I will let this challenge defeat me.”

“Look at the wall and think about the horizon that lies in the countryside,” he said. The more a person journeys toward the horizon, the farther, longer and wider that horizon becomes.

Remember to call and visit old friends, he said, “but live and journey with the new ones.”

When asked how kids their age could change the world when it has so many problems, the pope told them they have to begin with the people and situations in their daily lives.

One’s heart has to be like the hand that is responding in a positive, generous way, not the negative, self-centered approach, he said.

“You can begin to change the world with an open heart,” the pope said, and by listening to others, welcoming others and sharing things.

Pray for everyone, including one’s enemies and “those who make you suffer,” he said. “Never return evil with evil.”

Don’t bad-mouth, insult or wish bad things would happen to others, he said. “That’s how you can change the world. There is no magic wand, but there are little things we can learn to do every day.”

Pope Francis suggested that the kids meet up to openly discuss the right and the wrong ways to respond to the many difficulties or choices that have to make each day.