‘Asking God to intervene … and save lives’ 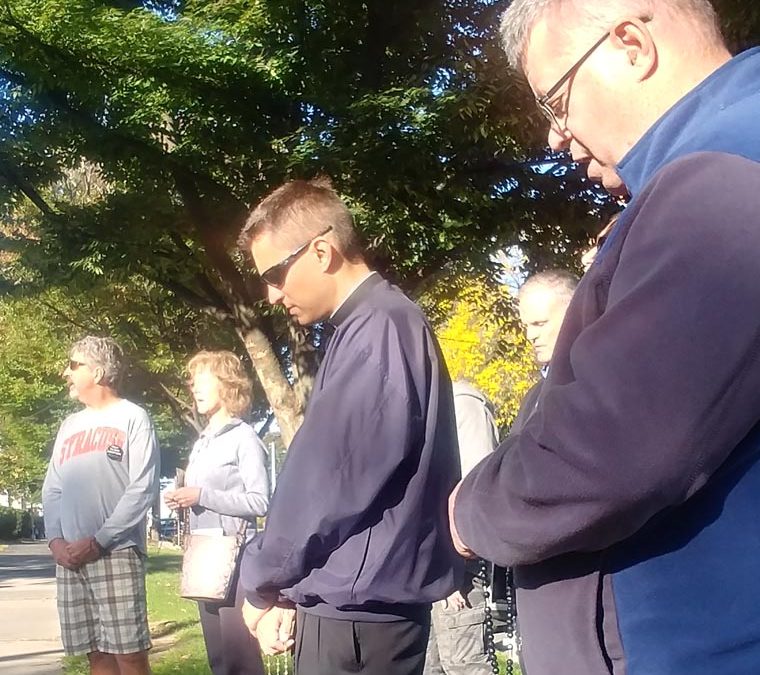 Quicker than the bee that buzzed around in the sunshine by the sidewalk, Father Christopher J. Ballard pivoted and faced the road.

Someone in a car had just driven by and yelled, “Get a life!”

Father Ballard replied: “We’re trying to help them get a life!”

By “them,” he meant unborn babies. He was among more than a dozen people from six parishes who prayed the rosary on Saturday, Oct. 21, in front of Planned Parenthood in Syracuse. Respect Life Month is observed every October by the Church in the United States.

Father Ballard, pastor of Our Lady of Hope Church in Syracuse, was praying with the group from his church when the thought occurred that someone might drive by and utter an insult. “So I had a response right away,” he said.

The morning was pleasantly cool as the group stood on the sidewalk near an elm tree. “We come out and pray and fast,” said Our Lady of Hope parishioner Kathy Cizenski, “and try to get people aware of the fact that abortion is very harmful for women, and that there are other options.”

As an example, she mentioned Joseph’s House, the Syracuse facility that says on its website: “We promote the sanctity of life and the dignity of women by providing a nurturing home for mothers facing an unplanned pregnancy.” Other options include Catholic Charities of Onondaga County Expectant Parent Services.

“A lot of times women will pray that they have a sign from God that they don’t have the abortion,” Cizenski said, “so if somebody’s standing out here and praying in the pouring rain and they’re walking in, they’re like, Oh, my goodness, I’m not supposed to have this abortion.

“And there are people that have written us letters saying that they wanted to thank the people that stood out here because they have a granddaughter now who’s five years old, and she’s the joy of their life … because somebody was standing out here.”

She said the prayer group does not protest or condemn. “All we do is pray and offer help,” she said.

“Everything that Kathy said I echo,” said her husband, Dave, a member of the Our Lady of Hope Men’s Group. He stressed that “we don’t condemn, we don’t judge, we’re not here to protest; we’re here just to pray, and let the will of God really be done. … We’re just asking God to intervene here and save lives. … The desperate act of abortion is just that — so desperate that I just think that [there are] so many other options.”

The Cizenskis, he said, have raised four children. “It’s a blessing, above and beyond everything else,” he said.

Paraphrasing Matthew 18:20, Men’s Group member Tom Sexton said, “Wherever two or more are gathered, his will be done.”

“It’s just something I felt called to do for years,” he said of joining the rosary session, “and I finally did it. And I’m here to pray for life.”

Another member of the group, Steve Kenyon, said, “We’re showing people in the neighborhood somewhat of what we’re about, and showing that we’re trying to effect a change in the hearts of people.” Kenyon said he also attended because he wanted to get closer to God.

Men’s Group member Peter Tassini, Sr. said, “I believe, as the church teaches, in the dignity of all life, from conception to death. So: All life is a gift from God, and is precious, and it should be respected.

“What I hope to accomplish is that people come to understand that God, our creator, has given us so many gifts, including life, all our lives, and we should honor and respect that.”

Men’s Group member William Dussing participated with the hope that “people will change their hearts towards abortion. … It’s hideous; if this isn’t wrong, what is? … If killing a child is not wrong, what’s wrong?”

As the Our Lady of Hope group was wrapping up, another church group started arriving. Kenneth Gray, of St. Mary of Assumption Church in Minoa, is part of a group that prays the rosary in front of Planned Parenthood at 10:30 a.m. every Saturday. “We’re praying that the people will change their minds in here,” he said.

Timothy Young, of St. Daniel Church in Syracuse, has prayed with the group since 2008. “It is a good thing to do, praying for life,” he said.

Mary Callahan, also of St. Daniel’s, used to pray at abortion clinics in New York City when she lived there. “It matters — all lives matter,” she said. Helpless children, she said, “need the chance to shine before God, just like we do. And we rob them of that when we rob them of their life.”

“I came here today not only for the babies but for the mothers because they suffer anguish,” said Bill Huntley, of St. Rose of Lima Church in North Syracuse. Unborn babies can’t defend themselves, he said. “They don’t even have the opportunity to speak for themselves, so we’re the only ones that can speak for ’em. That’s why I’m here too, because I can’t change the laws, but at least I can help one baby at a time and one mother at a time.”

Also hoping to save unborn babies’ lives through peaceful prayer was Sharon Bubniak, of St. Margaret Church in Mattydale. “If somebody doesn’t like it, I’ll just keep praying,” she said. “And it’s my duty, it’s my obligation to the love of God, to love those who are in the death game and pray for their souls as well as the souls of the babies.”

“As Christians we believe that prayer is powerful,” Father Ballard said, “that prayer changes us, and it changes the world around us.”

He added: “People see us standing here and they wonder, What’s going on there? Abortion has become so mainstream that it’s no longer in many ways in our culture even questioned, and so I think for people to … see us still making a witness, even into the 21st century in this day and age, it just raises awareness about this issue.

“We’re not going to let it go away because we believe in life, at all stages, starting with conception.”