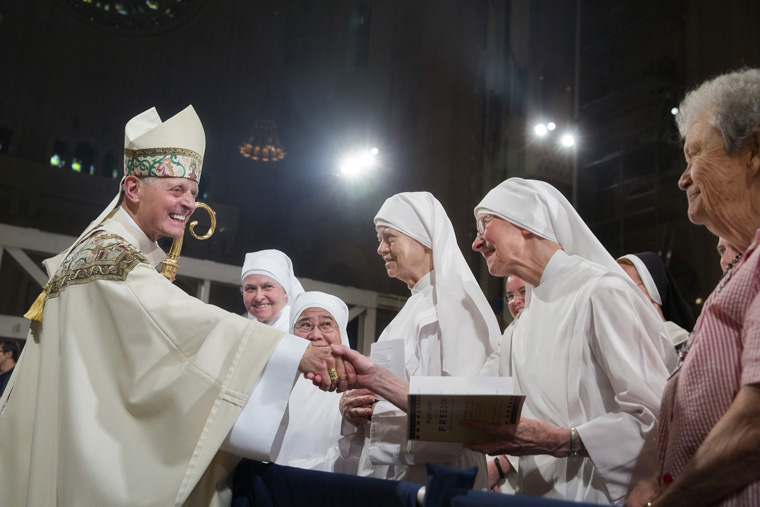 WASHINGTON (CNS) — The theme for the 2016 Fortnight for Freedom, “Witnesses to Freedom,” unfolded as 1,500 people spent part of their July 4 holiday in Washington attending the observance’s closing Mass and venerating the relics of two English saints martyred in 1535 for their Catholic faith.

The Mass and veneration took place at the Basilica of the National Shrine of the Immaculate Conception. After the Mass, people waited in a long line to kneel and pray before the relics of St. John Fisher and St. Thomas More displayed near the altar.

Welcoming the congregation, Msgr. Walter Rossi, the shrine’s rector, said those filling what is the largest Catholic church in North America offered “testimony that the freedom to live our lives according to our faith is fundamental to the life of believers.”

The U.S. Catholic Church’s fifth annual Fortnight for Freedom closing Mass included the participation of three of the petitioners in a recent Supreme Court case challenging the federal contraceptive mandate. They contended that the requirement violated their religious freedom by forcing Catholic institutions to provide employee health insurance coverage for abortion-inducing drugs, contraceptives and sterilization procedures, which are prohibited by church teaching.

Cardinal Donald W. Wuerl of Washington, whose archdiocese and affiliated agencies challenged the mandate, was the main celebrant at the Mass. The homilist was Pittsburgh Bishop David A. Zubik, whose diocese also opposed the Health and Human Services contraceptive coverage provision of the Affordable Care Act.

The consolidated case that was before the Supreme Court, Zubik v. Burwell, is named for the bishop and for Sylvia Burwell, who is HHS secretary. A group of Little Sisters of the Poor — whose religious order also challenged the mandate — sat in a pew near the front of the congregation and received a long standing ovation at the end of the Mass.

On May 16, the Supreme Court in a unanimous ruling sent the case back to lower courts, vacated earlier judgments against those parties opposing the mandate, and encouraged the plaintiffs and the federal government to resolve their differences.

In his homily, Bishop Zubik commended the congregation for standing together and praying for religious freedom “on this 240th anniversary of our freedom in our United States,” dating back to the Declaration of Independence July 4, 1776.

He noted that just as footnotes in a term paper solidify the accuracy and strengthen the message of a point being made, “you and I are called to be footnotes, footnotes to the truth who is Jesus Christ himself.”

Catholics are called to be witnesses to Jesus and to be a living sign of his truth, the bishop said, adding that for some, that witness takes the form of martyrdom.

Bishop Zubik said “our ancestors in the faith” demonstrate what it means to be a footnote to Jesus’ truth, and then be witnesses and sometimes martyrs. He pointed to St. John the Baptist, who was beheaded when he refused to give in to political power.

Pittsburgh’s bishop praised the example of Sts. Thomas More and John Fisher, a layman and a bishop, respectively, as witnesses and martyrs who “would not yield supremacy of power over faith, even to the king.”

Both men refused to accept Parliament’s Act of Supremacy, which had declared that King Henry VIII was head of the Church of England. Both were imprisoned for treason in the Tower of London for months. They were beheaded 14 days apart in 1535; Bishop Fisher was 65, More was 57.

The relic of St. John Fisher was a ring that had belonged to him. The relics of St. Thomas More were a piece of his jawbone and one half of a tooth. The national shrine was the last stop of the tour for the relics, which earlier been displayed in Miami, Baltimore, Pittsburgh, Philadelphia, Minnesota, Denver, Phoenix, and Los Angeles.

In his homily, Bishop Zubik also highlighted the heroic example of other martyrs, including St. Maximilian Kolbe, the Polish Franciscan friar who gave up his life for another man in 1941 at the Auschwitz concentration camp, and Blessed Oscar Romero, the Salvadoran archbishop and champion of the poor who was shot in the heart while celebrating Mass in 1980. Bishop Zubik also praised the witness of the 21 Egyptian Coptic Christians beheaded by Islamic State militants on a beach in Libya in 2015.

Bishop Zubik noted that the Little Sisters of the Poor in their service to the elderly poor and in their stand for religious freedom “are carrying the banner that we will not back off the truth that is Jesus Christ.”

He noted that the nation’s forefathers put forth religious liberty as the first freedom in the Constitution’s Bill of Rights, giving people the freedom “to worship our God as the source of our strength, and also to “live our faith outside our churches, synagogues, and mosques.”

Opponents to the HHS mandate have charged that it offered exemptions to religious groups in houses of worship, but not to educational, health care, and charitable ministries operated by churches, which they said are as essential to the practice of faith as prayer is.

The intercessions included a prayer that the president, judges, and lawmakers will uphold religious freedom and protect the conscience rights of all people, and that religious-sponsored educational, healthcare, and charitable outreach programs will be free to fulfill their mission.

Cardinal Wuerl read a prayer for government written in 1791 by Baltimore Archbishop John Carroll, the first Catholic bishop in the new United States.

In remarks after Communion, Archbishop Lori said he hoped the saints’ relics venerated that day “will spur all of us on to cherish, protect and use wisely the gift of freedom.” He thanked dioceses, parishes and individual Catholics for their activities during the Fortnight for Freedom, which ran from June 21 — the vigil of the feasts of St. John Fisher and St. Thomas More — to July 4. Archbishop Lori had celebrated the fortnight’s opening Mass in Baltimore at the Basilica of the Assumption of the Blessed Virgin Mary.

Archbishop Lori also encouraged people to pray daily for religious freedom and to use that freedom to spread the Gospel, especially the works of mercy, and to stand in solidarity with persecuted people around the world.

People entering the national shrine by its main doors could see a 30-by-50-foot U.S. flag draped from the Knights’ Tower, which was provided by the Knights of Columbus. The Mass concluded on a patriotic note, with the singing of “America the Beautiful.”

The fortnight’s closing Mass was telecast live by the Eternal Word Television Network and also appeared on CatholicTV.