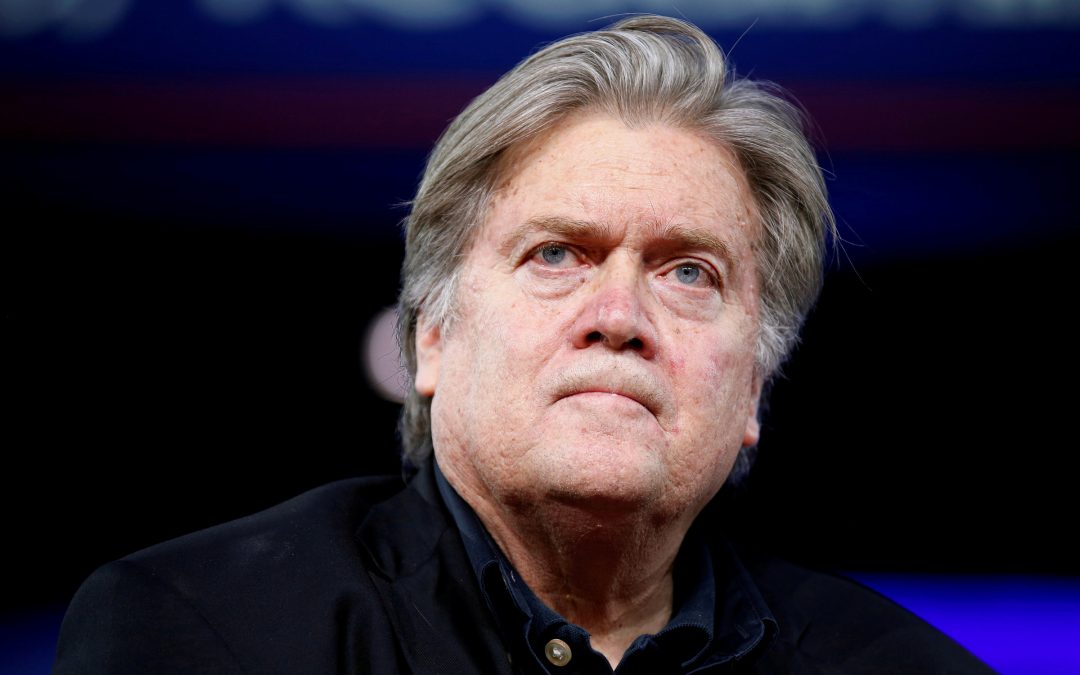 FORT WAYNE, Ind. (CNS) — When former White House strategist Steve Bannon criticized the Catholic Church and the U.S. bishops for their views on immigration, he resurrected widespread 19th-century anti-Catholic nativist charges against the church and immigrants to the United States.

In an interview Sept. 10 on the CBS-TV program “60 Minutes,” Bannon said that the bishops of the United States had “an economic interest in illegal immigration” as “they need illegal aliens to fill the pews.”

Bannon, a Catholic, was responding to the bishops’ defense of young people, called “Dreamers,” and support for the Deferred Action for Childhood Arrivals, known as DACA, that protected them from arbitrary deportation.

DACA is currently under legislative review and the bishops’ concern is that it will be abandoned.
Bannon’s complaint of a political and economic ulterior motive for the U.S. Catholic Church’s traditional support of immigrants is one the most persistent anti-Catholic legends of American politics.

The charge has been that Catholic immigrants represent an unthinking electorate that will vote in lockstep according to the dictates of the pope and the hierarchy. The pope and the U.S. bishops will control this massive Catholic electorate and will wield their power to undermine American democracy for their own benefit.

That argument was made a hundred times over in American history. Thomas Jefferson and John Adams waged political warfare over the Naturalization Act of 1798 aimed at limiting newly arrived European “aliens” from voting.

Rising on a tide of anti-immigrant fears, Lyman Beecher, father of “Uncle Tom’s Cabin” author Harriet Beecher Stowe, published “The Plea for the West” in 1836. He argued that Catholic immigration was a papal conspiracy to take over the Mississippi Valley.

The inventor of the wireless, Samuel F. B. Morse, claimed in 1835 that European Catholic royalty were flooding America with immigrants who would soon coalesce as an army under the pope’s direction.

The pre-Civil War, anti-Catholic nativist movement reached a crescendo with the Know-Nothing party that was built on the fear of a Catholic takeover of America through domination of the ballot box.

A centerpiece of the Know-Nothing movement was the call to deny Irish immigrant Catholics access to the ballot box by requiring a minimum of 25 years residency before citizenship was granted. Other Know-Nothing proposals included anti-papal test acts before taking political office. Catholics would be specifically required to reject foreign — papal — influence.

After the Civil War, the nativist fear was that Catholic immigrant voters egged on by their bishops would force state subsidies for parochial schools to undermine the public school system.
In the midst of passing convent inspection laws and other anti-Catholic, anti-immigrant nuisance legislation, numerous states would enact so-called Blaine amendments to their state constitutions to prevent state subsidies to Catholic schools no matter how “powerful” the Catholic immigrant voting bloc became. Such 19th-century Blaine amendments remain in place today in 37 state constitutions.

The American Protective Association — while conjuring up fears of an armed Catholic uprising — argued in the late 19th century through the early 20th century for restrictions on Catholic immigration and for the closing of Catholic schools as un-American entities brainwashing the young.

The “goo-goo” movement of political reform in the late 19th century and early 20th century, aimed at breaking the power of urban political machines, was often a thinly disguised attack on the power of the Catholic immigrant city voters allegedly controlled by local priests and bishops.
Bannon’s critique of the Catholic Church and its support of immigrants is nothing new in the American experience. Yet at no point has it ever been shown that the church has economically benefited from its position on immigration or used its position politically.

In fact, the U.S. bishops have made a point of not interfering in any way in the voting process. When the Trump administration announced earlier this year that it would move to lift restrictions on the political involvement of churches, the bishops were quick to point out that the Catholic Church in the United States has never been involved in such activities and would continue such a policy in the future no matter the legal status.