Everyone can think of the qualities that make up a working man, a grown man, a man’s man — even a ladies’ man. But what does it take to be God’s man, a man of faith, prayerfulness and spiritual strength? 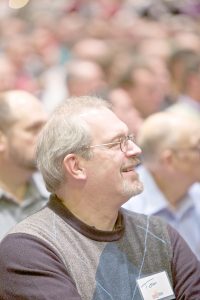 The IGNITE Catholic Men’s Conference invited men to consider this very question and its impact on their own lives.

It drew nearly 1,000 men from around the diocese and from as far away as Texas.

This is about the same number as attended last year, and that’s fine with Father Joe O’Connor, director of the Office of Vocation Promotion and one of the conference’s organizers. He’s not necessarily looking for the event to get bigger, only for it to speak to those who come.

He said he knows that many of the men who come would already be men of strong faith, but he likened them to members of Syracuse University’s basketball team.

“Syracuse just reached number one. What if Coach Boeheim said, ‘Okay, we did it. I’m done coaching.’ In fact, his coaching becomes even more important to keep the team fired up and to get them to continue to do their best,” Father O’Connor said. “These men are already involved in their faith, but getting fired up when you’re already involved in your faith is sometimes even harder to do.”

The IGNITE Conference provides these men with a much-needed opportunity for reinvigoration.

“We want to inspire the faith of the men on a day-to-day basis,” he said. “My vision is that these men go back to their parishes and inspire other men.”

Nowhere is the network of fellowship and inspiration that comes from the conference more evident than with the men’s group at St. John’s Parish in Liverpool.

John Schramm is a member of the group, and he attended the IGNITE conference for the second time.

“I came last year and I found it to be one of the most exciting spiritual experiences I’ve ever had in my life,” Schramm said. “It really energized everyone who went.”

He said men from his parish who attended last year’s IGNITE conference were inspired to start their own men’s group. Originally there were around seven members, but over the course of the year the group has grown to 25 or even 30 members.

They meet each week at 7 a.m. on Saturday mornings. Schramm said he knows the time is early, but the men who are willing to get out of bed are able to benefit from an opportunity to share and grow in their faith.

“Our group shares the scriptures for Sunday’s Mass, we read them together and then break up into small groups — in the beginning it was just one group, but now it’s small groups — and we really just share back and forth our faith and our experiences. It’s nice to get different perspectives on belief,” Schramm said.

There’s no debate or argument at the men’s group, Schramm said, instead the men focus on being open to spirituality. “They find something that they need among men who are not afraid to share their faith,” he said.

This faith-filled experience was something John Sweeney, a parishioner of the Cathedral of the Immaculate Conception, was searching for. It was Sweeney’s first time attending the men’s conference. He had been drawn by the ad for the conference in the church bulletin.

“It’s something different,” Sweeney said. “I’m just looking for inspiration.”
For David Stott, the call to inspire others was passed down to him by his father. Ron Stott owns the Pope John Paul II motorcycle, which was designed by Orange County Choppers, a custom motorcycle manufacturer that is featured in a reality television show. The motorcycle was on display at the IGNITE Conference as a way to promote the need among men to participate in Eucharistic adoration.

David Stott said he knows of several Catholic motorcycle groups, and he finds the open road a good place for reflection. “That’s where I spend a lot of my time praying. If you think about it, what better place to pray?” he said. “If nothing else just to have a moment to think about Christ and to think about how our faith basically is the center of our life.”

Keeping faith at the center of life was a theme for speakers at the IGNITE Conference, which featured talks by Jesse Romero, a retired veteran of the Los Angeles County Sheriff’s Department, a three-time World Police Boxing champion and a two-time USA Kickboxing champion, and Sean Forrest, the founder, president and executive director of the Catholic not-for-profit organization Movin’ With the Spirit.

The day began with a talk by Father Larry Richards, who described himself as “the loudest-mouthed priest you ever met in your life.”

Father Richards is the founder and president of The Reason for Our Hope Foundation, which is dedicated to educating others about Jesus. He has also served as the pastor of an inner-city parish, as a high school chaplain, a counselor and evangelist.

For Father Richards, being a Catholic man means accepting some hard truths about faith and expectations.

With his tough talk, his gray brush-cut and his tendency to shout when excited, Father Richards often took on the appearance of a football coach in the locker room at half-time. But his message was one of faith and devotion, especially to prayer and reflection on the Bible.

Punching his fist in his palm, he chanted, “No Bible, no breakfast; No Bible, no bed.”
Father Richards liked to mimic what he said were the men who were “wimpy” about their faith. He hunched his shoulders forward, hung his head and said in a whiney voice, “‘But Father, God never talks to me.’ I say, ‘C’mere.’ Whack! God is always talking! What’s the problem? We’re not listening.”

He stressed the need to open oneself to God’s presence by finding a place for prayer and reflection in every day.

He encouraged the men to remember that Christ is always within them, not just immediately after they’ve received Communion.

“Do  you think that Christ is some kind of a la-la that he’s there and then he’s gone? Christ is within you all the time,” he said. So that means that men should act accordingly instead of allowing where they are to determine who they are, he said. “Here am I at church, here am I at the bar, at my friends, with my family. Men, be men of integrity. Be who you are no matter where you are, as if you were in front of the tabernacle.”

An important part of being a man of integrity is being open to love, he said.

“Even the devil knows he’s loved by God, gentlemen,” Father Richards said. “It isn’t enough to know you’re loved. You’ve got to respond to that love with your life.”

This means taking the time to consciously surrender oneself to God and be willing to say “I love you” to their family members. “If you can’t do that, you might as well walk out of here and look in a mirror and say, ‘I’m a wimp, I’m a wimp, I’m a wimp,’” Father Richards said.

He said he knows how difficult it can be to express love and reserve judgement. “We C
atholics are great judgers, but we’re not so great lovers,” he said. He told those gathered of his own experiences with his father, a cop who battled alcoholism.

“You’ve got to tell the people in your life that you love them. I know it’s hard,” Father Richards said, “that’s why it’s called being a man.”

The next IGNITE conference is scheduled for April 2, 2011.